Netanyahu Lets the Fox into the Henhouse

There is a fox in the henhouse. Benjamin Netanyahu let it in.

In the course of the Israeli government coalition negotiations, the Religious Zionism party’s leader Bezalel Smotrich foxed his way to a position that would allow him to implement his plan to become the settlement tsar in Netanyahu’s government and de-facto annex the settlements and the settlers to Israel.

Senior Israeli security officials are reportedly warning the politicians – both outgoing but mostly incoming – of further decline in the security situation in the West Bank, urging restraint and self-discipline.

Well, good luck to anyone trying to restrain and discipline Itamar Ben-Gvir, Bezalel Smotrich and their fellow travelers, as well as thousands of Israeli soldiers policing the West Bank, who see the November 1st election results as a license to brutalize Palestinians and Israeli anti-occupation activists.

For many Israelis of my generation, even more than spiritual reflection, Yom Kippur evokes political reflections on war and peace.

Every year since 1973, Yom Kippur takes me back to that dark period in Israeli history, when a disastrous war drove Israelis to question their leaders, the power of their military, their sense of invincibility and the very ability of their national home to survive. Israel won the war, but the loss was immense. Some 2,200 soldiers died and 7,250 were injured. It caused one of the deepest political crises in Israel’s history. It forced a painful collective introspection and drive to overcome the hubris and sense of complacency in the wake of Israel’s spectacular victory in the 1967 Six-Day War. That complacency and hubris was known in colloquial Hebrew as the “conceptsia” (conception).

The Vision of Oslo, 29 Years Later

Twenty-nine years ago this week, the leaders of Americans for Peace Now stood among the many dignitaries at the signing ceremony of the Oslo Accords on the White House lawn. APN has worked behind the scenes in the years that preceded Oslo to push the vision of Israeli-Palestinian peace, advancing the dialogue between Washington and the PLO, and helping induce the détente in relations between the Israel and the Palestinian leadership.

After the Ceasefire: From Conflict Management to Conflict Resolution

A poll released recently by the Brookings Institute shows that over half of Americans (46% of Republicans and 57% of Democrats) do not know what the Biden administration’s position is on the Israeli-Palestinian issue. Surprising? Not really. Because although the administration has a position on the issue, it does not have a solid policy, and definitely not the kind of vision-driven conflict-solving policy that past administrations had.

Based on private conversations and public statements by members of the Biden administration’s Middle East policy team, the administration’s policy on this issue partially stems from Israel’s policy, which can best be characterized as “conflict management” rather than conflict resolution.

On Israel’s Birthday, Wishing for Peace and Vowing to Advance it

Jerusalem’s municipality is reportedly planning the erection of a 100 yard tall flag pole, twice the height of the Statue of Liberty, to hoist a blue-and-white Israel flag that is 108 feet long and 79 feet wide. The goal, according to the report, is for the flag to be seen from every corner of the city. It will, not coincidentally, be most visible from the Old City and its surrounding East Jerusalem Palestinian neighborhoods.

US-Palestinian Economic Détente Alone is not a Strategy

The Biden administration last week issued a joint statement with the Palestinian Authority announcing the resumption of the U.S.-Palestinian Economic Dialogue (USPED).

In a virtual meeting, administration officials and senior representatives of the Palestinian Authority “recognized the importance of restored political and economic relations between the U.S. government and the Palestinian Authority and pledged to expand and deepen cooperation and coordination across a range of sectors,” the statement said. The re-activation of this body reverses one more component of the Trump administration’s sweeping anti-Palestinian policy. 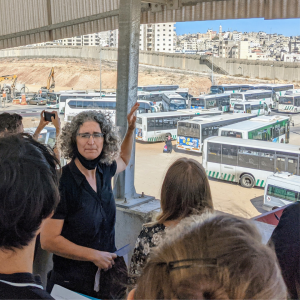