APN is fighting back

The election of Donald Trump to the presidency of the United States has set off reverberations around the world. For many, the alarm bells could not be ringing any louder. A campaign that featured anti-Muslim and anti-immigrant sentiment, and was supported by a legion of online anti-Semites, is now transitioning to an administration that makes many Americans justifiably fearful.

Steve Bannon, the former editor of the right-wing Breitbart News who has trafficked in conspiracy theories, race-baiting, and anti-Semitism, has been appointed as President-elect Trump’s chief strategist and counselor. Lt. Gen. Michael Flynn, an avowed Islamophobe, has been appointed as national security advisor. Senator Jeff Sessions, an anti-immigrant crusader who has made numerous racially insensitive and derogatory remarks, will become Trump’s attorney general. And Trump is considering the appointment of secretaries of defense and state who would seek to destroy the Iran deal, jeopardizing U.S. and Israeli security in the process.

Help APN fight back against right-wing extremists in the U.S. and Israel – and keep hope for peace alive

You can't help but wonder.

"Deluded" - Because we dared.

Prime Minister Benjamin Netanyahu loves to use social media as a tool to settle accounts with those who dare to challenge his policies, often in demagoguery that panders to the online mob both in content and style.

On Sukkot Eve, it was us, Americans for Peace Now, who were the target of Netanyahu’s bluster. Why? Because we dared to highlight his West Bank settlement policy at a special United Nations Security Council session.

At the gathering, APN’s Lara Friedman delivered a measured, fact-based analysis of the damage that West Bank settlements inflict on Israel’s national security. We are proud of Lara’s performance at the security Council and gratified to have been given the opportunity to share with the world our deep concerns about the direction in which Netanyahu’s policies are leading our Jewish homeland.

Netanyahu, in a misleading Facebook post, falsely accused us of alleging that the settlements are the cause of the Israeli-Palestinian conflict. We never make this argument. 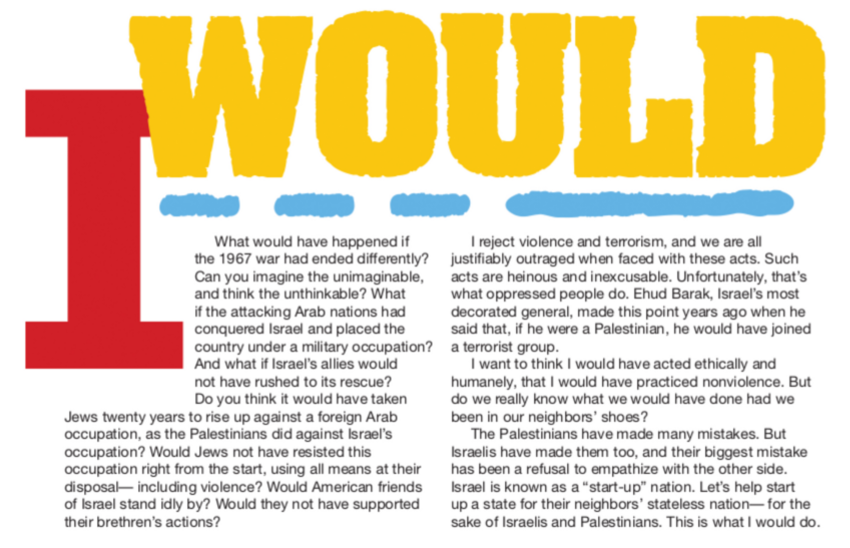 But read to the end and you find that Kiryat Arba – one of the most iconic and radical of the ideological settlements, the settlement home to Baruch Goldstein (y”sh), who murdered Muslim worshipers at the Ibrahimi Mosque/Tomb of the Patriarchs in 1994 – is shrinking. Settlers there are given to lament that “political considerations and outside pressure means nothing changes.”

Who is helping lead the charge to bring this “outside pressure”? Peace Now.

So it is no surprise that in the same article, when the Washington Post wanted to learn the facts about Israeli settlements from an authoritative source, they turned to Peace Now’s Hagit Ofran.

Last night, Netanyahu’s right wing government pushed a law through the Knesset to silence dissent. Although it was touted to the public as a matter of transparency, the reality is that this law is aimed at Peace Now and other progressive groups.

I am proud to introduce Tough Questions, Expert Answers, a new APN publication series which tackles seminal issues pertaining to the conflict. In a world where soundbites dominate, it is critical to take the time to understand the issues that can change the world- for better or for worse.

The first edition in the series is a Q&A on the Temple Mount. With tensions growing by the day over the world’s most contested religious site, this timely explainer by Jerusalem expert Danny Seidemann is a must read. As Danny correctly states, "the battle over the Status Quo at the Temple Mount/Haram al Sharif has increasingly become a proxy for the Israeli-Palestinian conflict writ large."

These are not easy or happy times in the Middle East. If the past year is anything to go by, things are only getting harder for Israelis and Palestinians. We are collectively sliding slowly down a slippery slope toward some sort of ugly, violent, and tribal one-state reality. Just look at the recent Pew Survey’s finding that roughly half of Israeli Jews look approvingly on the notion of expelling Arabs from the country. Look at the extensive incitement on Palestinian Authority media, the wave of knife attacks and the dismal socio-economic state of the Gaza Strip. How are we—Israelis and American Jews—going to deal with this reality in the years to come? Where do Shalom Achshav (Peace Now in Israel) and Americans for Peace Now fit in? —Yossi Alpher

Purim is upon us. Most Jews who celebrate Purim remember it as the story of the evil Haman who bribed the buffoonish King Ahaseurus to kill all the Jews in the Persian kingdom as a result of his rivalry with the Jewish courtier Mordecai. The Jews managed to depose Haman, and convinced Ahaseurus to let them fight back and slaughter those who would have stood against them.

The key to understanding the story is a statement by a fourth century Babylonian rabbi who lived centuries after the story might have happened, in the place that it was supposed to have happened—Persia. That rabbi, Rava, added one observance to those listed in the Esther scroll itself (feasting, exchanging gifts, supporting the poor and reading the story): “A person is obligated to get drunk on Purim until he cannot tell the difference between ‘blessed is Mordecai’ and ‘cursed is Haman’.” This is a very specific obligation. There is a specific goal here.

A Long Line of Worriers

I worry about Israel today, after nearly 50 years as an occupier of another people. The Occupied Territories hardly figure in the public discourse in Israel these days, and yet the occupation won’t go away simply as a result of inattention.

The attitude of right-wing extremist supporters of Israel also worries me greatly. When you tell them that constructing peace is a complex undertaking, that it requires both imagination and pragmatism, they’ll dismiss you by dumbing down the Israeli-Palestinian conflict. They say things like, "The Muslims want to destroy Israel" or "The Arabs refuse to recognize Israel as a Jewish state" or "If the Arabs had accepted Israel in 1948, the Palestinians wouldn’t be where they are today."

They say things like, "Israel has no partner for peace," ignoring the Palestinian government's renouncement of violence against Israel. They even have problems with the Palestinians using a non-violent diplomatic path towards peace by turning to the international community for support of their national aspirations.

Extremists here and in Israel will never find a situation in which Israelis and Palestinians can reach an accord and a Palestinian state can peacefully come into existence.

That’s why I’m so worried — and infuriated.