On Passover: Spill some wine...

The essence of Passover is a promise for a better future through the transformation of an entire people from slavery to freedom. This idea has sustained us, the Jewish people, for centuries.

In the wake of Israel’s recent elections we must find a way to cope with the policies of Israel’s re-elected prime minister which offer us little promise and hope.

After my dear friend Leonard Nimoy died recently, I was reminded of the time in 2011 when I first introduced him to Americans for Peace Now-- a shiddach worth celebrating. What was born of this relationship was a fundraising letter that he enthusiastically endorsed.

In my March 4th tribute to Leonard published in Tablet, I noted, "When I've asked other celebrities to sign a petition, ad, or call to action—whether about peace or women's issues—they usually want to know who else is signing; they need cover; they need time to consult their friends, managers, or agents to be sure they're not risking their public image. Not Leonard. He simply read the suggested draft, tweaked a few sentences, then put his name to the letter, which closed with a plea for a tax-deductible contribution to APN -- and the inside Spock joke, "Dare I say it? It's the logical thing to do."

Not Every Day Is Purim

Prime Minister Netanyahu began his speech to Congress with a reference to the book of Esther – the book also known as the “Megillah” that we read on the holiday of Purim. In attempting to make the case for his controversial speech, Netanyahu implied that he was playing the role of the heroine of the story, Queen Esther, savior of the Jewish people. It sounds absurd, but he was quite serious.

In fact, the whole path leading up to the speech was a series of twists and turns that are nearly unbelievable, although they certainly fit the themes of intrigue and absurdity that characterize the Purim story. Indeed, the political circus surrounding the speech provided us with our very own “Purim spiel” - whether it was the spectacle of House Majority Leader John Boehner inviting a foreign head of state to come to Congress and attack the elected president of the United States, or Netanyahu’s flagrant efforts to exploit the invitation for his own electoral gains, or the entire history of Netanyahu’s gratuitous jabs at President Obama (nor his unmitigated chutzpah in pretending otherwise)! This week, Israeli President Reuven Rivlin publicly lamented the challenge facing the new Palestinian city of Rawabi, whose existence he called a “clear Israeli and Zionist interest.” Rawabi is now ready for its first residents – except that there is no running water. This problem has continued for months, and President Rivlin drew attention to a Haaretz editorial identifying its source: the zero-sum game that Israeli settlers and politicians play with the lives of Palestinians.

APN Chair Jim Klutznick recently brought you the story of Rawabi and how it can benefit Israel – his words are more timely and urgent than ever.

Not so much as a mustard seed.

The Torah forbids the cutting down of fruitful trees, even during a time of war. The basis for this law appears in the book of Deuteronomy, with the verse adding rhetorically, “Is the tree of the field a man that you should make war upon it?”

An article written by APN's Ori Nir, published in today's edition of the Boston Globe, reminds us that the realistic attitude -one endorsed by all six of the most recent leaders of Israel’s General Security Service (Shin Bet) - is the one that advocates a two-state solution.

Americans for Peace Now works to advance Arab-Israeli peace and to highlight that such peace is not only necessary, but also possible. Support APN's message of peace and a two-state solution. 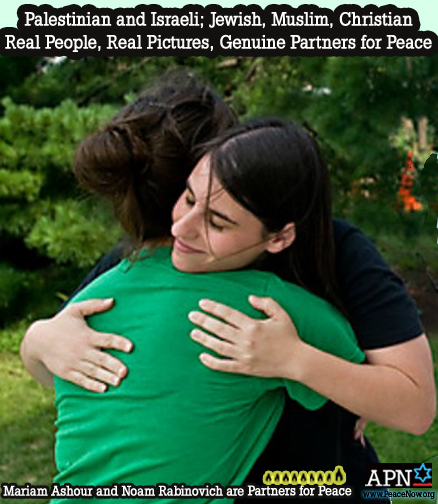