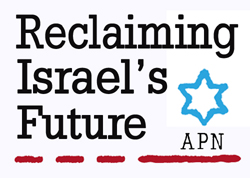 (6/16/14) Americans for Peace Now (APN) is proud to announce the launch of our new campaign, "Reclaiming Israel’s Future." The objective of this campaign is to re-focus energy and attention on the challenges that Israelis must face in order to secure a future as a democracy and a Jewish state.

This campaign comes in the context of the failure – or the pause of indefinite duration – of the U.S.-backed peace effort. Despite the sincere efforts of Secretary of State John Kerry and President Obama, their recent initiative fell apart because, like so many efforts before it, it morphed from a political process who purpose was to resolve the conflict, into a political process that simply continued for its own sake. Along the way, this process was exploited, as has happened so often in the past, to provide cover for developments on the ground that are antithetical to any negotiated, two-state resolution of the conflict.

APN’s mission is the achievement of peace and security for Israel, and to ensure Israel’s viability as a Jewish state and a democracy. While we believe that only negotiations can deliver a final resolution to this conflict, in the form of a negotiated two-state solution, we do not believe in process for its own sake. We hope that serious negotiations can be launched again in the future, but we will not sit by, waiting and hoping for a new process to be launched. We believe that now more than ever, it is time to face unflinchingly and without apology the hard truths about Israeli policies and actions that perpetuate this conflict and seek to prevent its resolution. In this way, we are taking action now to Reclaim Israel’s Future – before it is too late.

This is a six-week initiative. Each week, we will focus on a different core issue in this conflict: settlements, Jerusalem, borders and security, hatred and incitement, issues pertaining to the conflicting narratives of Israelis and Palestinians, and a final week that looks to the future and talks about what we can do to support a two-state solution. In the coming weeks, look for notices from us about new resources and activities related to our campaign, including opportunities to take action. Make sure to read our landmark statement, "On the 47th Anniversary of the Occupation: Time for Hard Truths, Tough Actions."