Settlement Bloc(k)s on the Road to Peace 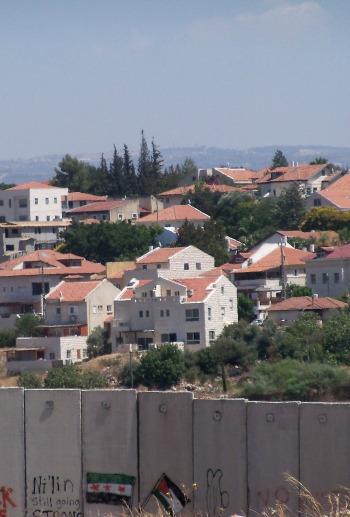 “Construction inside the settlement “blocs” isn’t a non-issue. When Israeli and Palestinian negotiators start talking seriously about settlements, they won’t be spending a lot of time debating the future of isolated settlements, because these settlements would unquestionably have to be removed under a peace agreement. The real negotiations, the very difficult ones, will be over the so-called “settlement blocs”: their size and contours, the way they will be connected to Israel, and the land swaps that will be used to offset them. This is why settlement expansion in these areas is equally if not more harmful to the two-state solution than construction in the isolated settlements.” (APN’s They Say, We Say”)

They Say, We Say

"Why shouldn’t Israel be able to build in areas that everyone – including the Palestinians - knows Israel will keep in any future peace agreement?"

"Palestinians act as if settlements are everywhere, but the truth is that most of the West Bank - the historic heart of Eretz Yisrael - is still in Palestinian hands. All Israel really insists on keeping is the major built-up areas, the settlement blocs."

"The U.S. should get Israel to agree to limit settlement activity to construction inside the blocs only."

"Why does the Left oppose construction in settlement blocs?"

"The term 'settlement bloc' merely describes an objective reality on the ground."

"Even the Palestinians know that settlement blocs are going to become part of Israel."

"If Israel stops building in settlement blocs its just rewarding anti-peace and anti-Israel extremism like BDS."

"American Jews have no business telling Israel not to build in the settlement blocs."