No Entry - Resources on the "Entry Law" 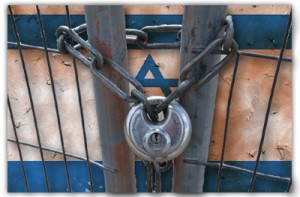 The “Entry Law,” adopted by the Israeli Knesset on March 6, 2017, bans entry to Israel of foreign national who support or publicly engage in boycotts of either Israel or West Bank settlements, whether they do it individually or are affiliated with organizations that endorse such practices. This law uniquely affects APN, a Zionist, pro-Israel organization that advocates for boycotts of the settlements and the occupation while strongly rejecting boycotts, divestment and sanctions (BDS) targeting Israel.

APN's President and CEO Debra DeLee said: “This new draconian law is a severe blow to Israeli democracy. It is aimed at a basic civil liberty, the freedom of expression, and will severely harm Israel by keeping out some of its greatest supporters, including Americans for Peace Now…We are a Zionist, pro-Israel organization, which cares about Israel's future as a democracy and a Jewish state. As such, we oppose the occupation and the settlements and call on our supporters to express this view by boycotting settlements. It would be absurd for the government of Israel to block us from visiting the country we love and care so much about because we chose to express a legitimate view in a legitimate way.”