The Israeli supreme court has been the focus of much media attention recently, most notably for giving the go-ahead to the new coalition government between Netanyahu and Gantz. This decision was undoubtedly a great disappointment and a blow to Israeli democracy, allowing a man with three charges of corruption to serve at the highest level of government. However, there have been some smaller human rights victories in the courts recently surrounding the coronavirus.

Quote of the day:
"When a journalist decides to violate a court order and publish the contents of a banned recorded conversation, the only question is of benefit to the public: is it a crime that was revealed, an obsession that lost proportions, or an orchestrated campaign to oust the Attorney General. The journalist is not a martyr. Journalists are not martyrs - not at the present stage of the contraction of Israeli democracy. Certainly not when they do their deeds with the blessing of government."
--Top Yedioth political commentator, Nahum Barnea, slammed Channel 13 News reporter Ayala Hasson for exposing banned 2010 recordings that have led to an assault on Attorney General Avichai Mendelblitt two weeks before the trial of Prime Minister Binyamin Netanyahu.*
Continue reading

You Must Be Kidding:
"It's unreasonable to ask Israel to give it up. It's like asking the US to give up the Statue of Liberty."
--In an interview, US Ambassador to Israel David Friedman boasts of his work to make settlements and the settlement enclave in Hebron, all deep in the West Bank, a condition for the Palestinians to get statehood.*
Continue reading

Percentage of Jewish respondents who think Israel should annex territories in the West Bank, even if annexation will harm relations with Jordan, according to poll found that more Israelis care about peace with Jordan than annexation.* 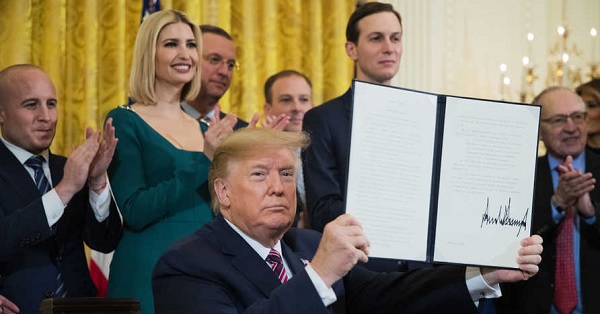 Last Tuesday, the New York Times reported that Donald Trump planned to sign an executive order targeting anti-Semitism on college campuses by defining Judaism as a race or nationality, cuing a flood of op-eds and a social media fury.  In the ensuing discussion, an important question arose; namely, what does such an order mean for the pro-Israel, pro-peace activities of organizations like Americans for Peace Now (APN) who hold events on college campuses?

In the following days, a different pattern emerged.  When unveiled, the text of the executive order definitively did not define Judaism as a race or nationality; instead, it suggested that those who face discrimination based on race or national origin will not lose protection under Title VI of the 1964 Civil Rights Act.  In other words, if a racial slur is lobbed, or a far-left campus activist tells a group of Jewish students that they are tools of “Israeli oppression,” Title VI grants those students a means for recourse.  Discrimination often occurs through the lens of race or nationality; consequently, it is an important, even welcome, development to include anti-Semitic acts carried out under the guise of race or nationality— in other words, based on the target group’s perceived racial or national characteristics— as being protected by civil rights law.

There lies a complication, though, regarding attempts to define anti-Semitism.  President Trump’s executive order advises executive agencies to use the International Holocaust Remembrance Alliance’s (IHRA) definition of anti-Semitism, which includes a broad array of examples that “might be useful as evidence of discriminatory intent.”  While many of these examples are self-evident, such as comparing Israeli policy to Nazi Germany, the list includes the far murkier waters of denying a right to self-determination for the Jewish people, for example, by claiming that the state of Israel is a racist enterprise, and targeting the Israeli state, understood as a Jewish collectivity.

As it turns out, this broadened definition of anti-Semitism can include an entire range of criticism of Israeli policy, subject to the prerogative of the US Department of Education.  As some critics have argued, this threatens to create a “chilling effect” whereby critics of Israeli policy exercise self-censorship, for fear of being subject to Title VI litigation.  And, most ominously, it achieves a seamless sleight of hand; as presidential advisor Jared Kushner wrote in his New York Times opinion piece defending the policy, this definition blurs the distinction between anti-Semitism and anti-Zionism.  By transforming the definition of anti-Semitism from including delegitimization of the Jewish state to including criticism of the policies and actions undertaken by the government of Israel, this executive order leaves little space for healthy debate about Israeli policy on campus.  While criticism of Israel certainly can venture into the territory of anti-Semitism, criticizing Israeli policy is not inherently anti-Semitic; rather, it is an essential part of formulating policy preferences in a functioning democracy, both in Israel and in America.

Reliance on the IHRA definition empowers the Trump administration to limit the scope of Jewish organizations, including APN, to critically discuss difficult aspects of the occupation.  It could, ultimately, serve as a Trojan horse to divide the Jewish community, on the one hand offering a greater umbrella of civil rights protections to Jewish students who face a real and growing problem of anti-Semitic harassment on campus, and on the other, risking labelling pro-Israel organizations which criticize Israeli actions as anti-Semitic and liable to be barred from federally funded spaces.  And, under the stewardship of an ideologically motivated Department of Education, this executive order provides ammunition for Title VI investigations against individuals or groups which stand in opposition to administration political priorities, thereby threatening to water down the flow of ideas on campus.

This portent is something that we should all be wary of. 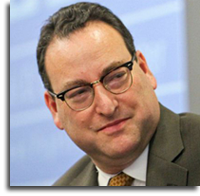 Americans for Peace Now mobilized opposition to the confirmation of Kenneth Marcus as Assistant Secretary of Civil Rights in the Department of Education over concerns that he would use his position to suppress free speech and intervene in curricula on college campuses. To our dismay, following his narrow confirmation by the Senate, Marcus has done exactly that. In the latest instance, the Department of Education ordered Duke University and the University of North Carolina at Chapel Hill to develop a plan for remaking their joint Middle East studies program in order to continue receiving federal funding. Among the alleged problems raised was “a considerable emphasis placed on the understanding the positive aspects of Islam” in programming for elementary and secondary school teachers and a lack of “similar focus on the positive aspects of Christianity, Judaism, or any other religion of belief system in the Middle East.”