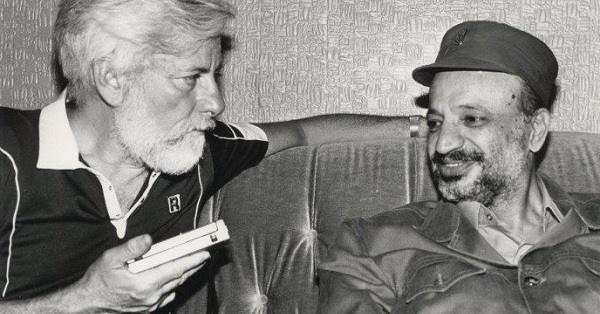 You Must Be Kidding:
An Israeli military court in the West Bank sentenced Waed Tamimi, the brother of the well-known former Palestinian teen prisoner Ahed Tamimi, to 14 months in prison for throwing stones at Israeli Border Police, the same amount of time that former soldier Elor Azaria sat in prison, for shooting in the head and killing an already shot, injured and incapacitated Palestinian assailant.**


News Summary:
Israeli Defense Minister Avigdor Lieberman and the Israeli police criticized the hundreds of residents of the Arab-Israeli city of Um al-Fahm who waved Palestinian flags when they attended a funeral of someone killed by police for attempting to stab a Border Policeman, even though the police limited the funeral to 150 people. But the family, commentators (including from Israel Hayom) and even Likud MK David Amsalem blamed the police. Ahead of a deal with Hamas, Israeli Defense Minister Avigdor Lieberman declared there has been a significant decrease in incidents from the Gaza Strip, while Hamas politburo chief Ismail Haniyeh said that Gaza is close to ending the blockade, and for the first time since the start of the March of Return protests along the Gaza border fence, the IDF announced it was opening a criminal probe into the killing by IDF snipers of two Palestinian demonstrators  - making the top stories in today’s Hebrew newspapers along with the threats from ultra-Orthodox over the plan to do construction work to build a bridge over the coming Sabbaths.

Meanwhile, US President Donald Trump plans to present his Mideast peace plan at the UN General Assembly in September, according to a report. And, in an interview with Reuters, Trump said about the Middle East: "I'm constantly reviewing Afghanistan and the whole Middle East. We never should have been in the Middle East. It was the single greatest mistake in the history of our country."

Syria's Famous Ice Cream Is Melting Hearts in Jordan
Bakdash has been a leading ice cream maker in Damascus for over 120 years. Today, despite the endless civil war, Syrians are still addicted to it – and now their Jordanian neighbors are getting hooked as well. (Rotem Maimon, Haaretz+)
Migrants unseen in Israeli photographer's exhibition
After spending years with African migrants in the Israeli desert, photographer Ron Amir has an exhibition of photos devoid of people; exhibition, previously on display in Israel, is set to move to the Museum of Modern Art of the City of Paris. (AFP, Ynet)

Commentary/Analysis:
IDF Probe Into Gaza Killings: An Opportunity to Rethink Open-fire Policy (Mordechai Kremnitzer, Haaretz+) The ultimate test of an order is not what’s written in it but how it's implemented – and when it comes to the Gaza border protests, there's reason for concern.
Like in America, the finger is light on the trigger (Aviad Kleinberg, Yedioth) Public Security Minister Gilad Erdan wants more weapons in the streets of Israel’s cities. If it doesn’t help, it won’t hurt. “Practiced citizens holding firearms in the public, sphere contribute to a sense of security, they are an important line of defense from lone-wolf attackers and they are essentially doubling the forces available, and hence strengthen the security of the public,” he said…(But) Those who say to use a “firearm in the public sphere” are the security forces, who have the training and practice required and who are under the supervision of their commanders. The rest of the armed forces can help in certain cases, but more than once they see the shadow of the hills as people and harm innocents. Even the experienced really have difficulty sometimes to decide when to use firearms, so imagine how it is for the Givati reservists who did basic training in 1998.
Morality is founded on reciprocity (Erez Tadmor, Israel Hayom) Soldiers' willingness to walk in harm's way to defend civilians is worthy of commendation, not condemnation. They never belong on the same moral plain as terrorists, who seek to harm civilians.
The Gazan Toddler With Cancer and the Humanitarian Trap (Amira Hass, Haaretz+) The 3-year-old was forced to undergo chemotherapy treatment alone due to restrictions on family members of Hamas. Such a policy enables the normalization of cruel behavior by bureaucrats and military officers,
The bluff of a Gaza sea port in Cyprus (Alex Fishman, Yedioth/Ynet) A dock for the strip in Cyprus—an idea being discussed as part of ceasefire negotiations with Hamas—would require the construction of a sea port in Gaza itself, which would in turn be a symbol of sovereignty for Hamas. The Israeli government, especially on the eve of elections, will not allow that.
Patriotism Comes Easy for the Israeli Right. On the Left, It's a Test of True Love (Chemi Shalev, Haaretz+) Leftist loyalty is challenged by assaults from the nationalistic right and temptations from the anti-Israel left.
Lauder loses the plot (Isi Leibler, Israel Hayom) The World Jewish Congress head is a decent, generous man who loves the Jewish people and state, but he has been misled. His harshly critical op-eds in The New York Times may cause Israel real harm.
Israel's Left and Right Are Destined for Defeatism (Zvi Bar'el, Haaretz+) Without a focal point around which to unite the whole left against the whole right, without a real war that could call all the camps to their flags, the political brigades have disintegrated into independent militias.
What apartheid? (Smadar Bat Adam, Israel Hayom) Israel is in the midst of a sweeping, natural process of integrating young Arab citizens in hospitals and pharmacies, the information technology sector, academia and in our courts and government offices.
Language as a Bridge: How My Grandfather Helped Prevent a Riot (Steven Klein, Haaretz+) As a police commander in pre-state Israel of the 1920s, my grandfather understood something that today's leaders seem to want to ignore: Knowing Arabic is the key to connecting to Israel's Arab population.
How are the words of Berkovic different from the statements of some Arab MKs? (Lilach Sigan, Maariv) In recent years, insults and agitators have taken over our public space. Was Eyal Berkovic's statement appropriate? No. But what was unusual about it? [NOTE: The writer gave no examples of Arab MKs’ statements. - OH]
Why Sacha Baron Cohen's Targets Agree to Be So Colossally Humiliated (Yair Ben David, Haaretz+) The Milgram experiment led to conclusions about people’s willingness to do things that seem off-the-wall. Sacha Baron Cohen took those conclusions to heart in 'Who is America?'