APN's Lara Friedman in Haaretz: A defeat for Israel, a victory for settlers and BDS 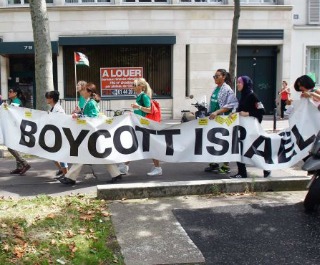 By effectively equating Israel proper with the occupied territories, Israel's High Court has made life harder for pro-Israel, pro-peace activists.

The High Court's decision to uphold the so-called Anti-Boycott Law will, regrettably, be a boon to Israeli settlers and their supporters, whilst giving a gift to activists worldwide who support the Boycott, Divestment and Sanctions (BDS) movement against Israel.

By approving legislation to curb boycotts of Israel and “areas under its control,” the High Court effectively equated the two, giving a kosher stamp (deliberately or not) to Israel's control of territory beyond the Green Line, and in doing so legitimized Israeli settlements.

Settlers and their supporters will be overjoyed at this victory, for it is not about economics (nobody ever argued that boycotts would financially dry up settlements) but, rather, politics. With this ruling, the High Court has taken a step toward formalizing and codifying Israel’s de-facto annexation of the West Bank, by further erasing the Green Line, and shackling to the settlements the 96 percent of Israelis who live inside "Israel proper," including the many who have zero interest in seeing their futures being hijacked by and tied to the settlers’ expansionist, Greater-Israel agenda.

Joining the settlers in celebrating this ruling will be activists from the opposite end of the political spectrum: those who support the BDS movement, including those who are plainly anti-Israel. Among these activists are those who declared it a victory when SodaStream decided to move out of a West Bank settlement to a site inside Israel, and who announced that they will continue to call for a boycott of the company after the move, consistent with the global BDS movement’s policy of targeting Israeli companies in general. If the settlers are overjoyed to see the High Court rule that settlements must be treated like Israel, these BDS activists are equally happy to see the High Court rule that Israel is, in effect, no different to the settlements.

Make no mistake: until Israel changes its pro-settlement, pro-occupation policies, the only real challenge to the global BDS movement is activism and policies that distinguish between Israel and the Occupied Territories, like those advocated by groups like Americans for Peace Now and those reflected in the European Union’s directive on settlements. Making such a distinction demonstrates that supporting Israel need not be synonymous with supporting settlements. It is an approach that is unapologetically both pro-Israel and pro-peace – telling activists that the right way to press for changes in Israeli policies is not seeking to target and punish all of Israel and its citizens, but to specifically target settlements and the occupation.

After the Anti-Boycott Law was passed by the Knesset back in 2011, I wrote that those who oppose boycotting the settlements leave the field open for those who call for boycotting everything Israeli. “If American Jews refuse to differentiate between Israel and the settlements in our activism,” I wrote, “we can’t complain when others insist on doing the same.” The Israeli High Court appears to have overlooked this fact, coming down not only on settlers who want to erase the Green Line, but also those anti-Israel activists who wish to do so.

If the High Court's ruling is intended to insulate Israel from international pressure over settlements, it won’t work. Quite the contrary: it puts Israel further out of step with its closest friends in the international community – including allies in Europe who are increasingly making clear, in rhetoric and in policies, that they are out of patience with Israeli governments who give lip-service to the two-state solution while forging ahead with actions on the ground that disclose a Greater Israel agenda. The court's ruling will fuel, rather than fend off, the trend toward the internationalization of action targeting Israeli policies that are inimical to the two-state solution – by individual countries and at the United Nations.

Likewise, if this ruling was intended to shield Israel from the effects of BDS, it will likely have the opposite effect. Successive Israeli governments have shrugged off every form of popular criticism and pressure, foreign and domestic, over their settlement policies, apparently confident that such protests are and will always be toothless. With this overtly pro-settlement ruling, the High Court will only energize the BDS movement, while making life harder for pro-Israel, pro-peace forces that have been urging – and will continue to urge – activists to draw a line at the Green Line.