Video: Lara Friedman on Social Media and Conflict, at the Google Ideas Summit

Earlier this week, APN Director of Policy and Government Relations, Lara Friedman, had the honor (and fun) of participating in the 2013 Google Ideas Summit in New York, as part of a panel entitled, "Digital Word Warriors." The panel was moderated by Michele Dunne, of the Atlantic Council.

Fellow panelists were: Lisa Goldman, an Israeli-Canadian journalist and the Senior Editor of the Daily Beast's Open Zion site; and Maysoon Zayid, a Palestinian-American actor, comedian, and writer. The panel looked at the role that social media can play during conflict - and in particular, the role of social media in the context of the most recent Gaza-Israel war. 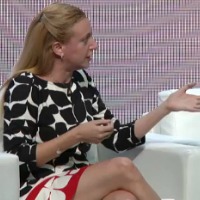