This is the ninth in a series of reviews of new books on Middle Eastern affairs. We asked Dr. Gail Weigl, an APN volunteer and a professor of art history, to review Sayed Kashua's novel on Jewish-Arab relations in Israel.

From the opening moment of this disturbing novel, the reader is engaged:  who is the lawyer - he, among all the characters, is never named - why is he tired, and why does it matter?  As we gradually learn the answers to at least some of these questions, we are led through a maze of so well-written a description of the lawyer's circumstances, it is some pages before we realize that Kashua's felicitous, easy style and quirky attention to minutiae have pulled us along to...where exactly?

From the recitation of the lawyer's distinctly odd domestic scene, however, the narrative elides into the national scene and a more didactic tone, introducing early on the gap between Jewish Israelis and Arab citizens of Israel, strangers in their own land.  Whether describing domestic or social concerns, the strength of Second Person Singular resides in the author's journalistic voice, alternating between didacticism, cynicism, and often hilarious, if poignant absurdity. Kashua doesn't quite transition from one to the other seamlessly, but seamlessly enough so that before the reader is aware, a shift has occurred to serious consideration of Arab-Israeli relations. 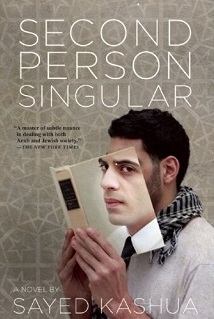 The real question here is not whether the circumstances of the lead characters' lives matter, or even are believable. It is, rather, whether the bizarre and unpredictable trajectories of their lives reveal larger truths about the absurd and random events that govern the lives of Arab Israelis: do the intricate plot-lines demonstrate a whole host of truths about life among Israeli Arabs in relation to one another and to the Jewish power structure? Thus, the hopelessly poor and rather provincial Palestinians of East Jerusalem and its environs are contrasted with the wealthy and well-connected Israeli Arabs, who have moved to Jerusalem to combine the educational and cultural advantages of urban Israeli life with a traditional Palestinian milieu. However, despite (or perhaps because of?) having attended excellent Jewish schools, and attaining a comfortable social status thereby, they are permanently insecure and self-referential.  Their calculated striving, brittleness, and competitiveness ultimately spawns a paranoid condition, one that flowers into the lawyer's florid and perfectly coherent, if demented, construct of betrayal.  The Arab characters, most specifically the other protagonist, the social worker Amir, show humor, warmth and a resigned passivity only relieved by a conflicted desire to escape the traditional restrictions and involution of village life.

A second but by no means secondary theme concerns gender relationships and the various types of women, each emblematic, who are catalysts for the action. A central motif is the Arab male fear of and contempt for female sexuality, vividly captured by the lawyer's fantasies about his wife, Amir's self-conscious attempts at a relationship, and the counterpoints of liberal versus traditional women represented by Amir's mother, surrogate grandmother, and adopted mother who figures centrally in his transition from social worker to artist. That transition in turn turns on the mystery at the heart of the story, which concerns the lawyer, his wife Leila, and the comatose Jonathan, whom Amir tends as caregiver.

Amir's voice, whether matter-of-factly recounting his feeding and toileting of Jonathan or his history as a village outsider, is patient and humane, without hostility bred from envy of Israeli Jewish culture, lifestyle and status.  Nevertheless, he represents the rejection of Arab identity as much as the abrasive lawyer.  The never-named lawyer, hence the symbol of all assimilated Arab Israelis, is more openly conscious of the distances in education, legal rights and living conditions that separate Israeli Jews and Arabs. The lawyer's and Amir's interwoven stories represent differing sides and the common dilemma of the Arab-Israeli experience:  how to reconcile Arab identity with Israeli citizenship; and how to appropriate Jewish Israeli culture without sacrificing Arabic traditions and culture. Transcending both concerns is the randomness of life, or perhaps of Arab life.  The lawyer, unraveled by the specter of his wife's betrayal, sinks to infantile behavior despite his acquisition of European style culture and respectable social status.  The social worker, liberated by the betrayal of his identity, is able thereby to realize an ambition he barely acknowledges to himself.  Both men are riddled with insecurities that feed their fantasies and self-deceptions.  Is their self-loathing the inevitable result of adopting a false identity or of the abandonment of identity for the falsest of reasons?

The lawyer's extended musings on the nature of identity and love, his rambling and contradictory inner thoughts represent best the psychology of alienation. Amir personifies another kind of alienation, a dogged albeit quiet pursuit of an identity predicated on denying, indeed on literally casting aside his provincial Arabic roots and everything those roots represent. He is the uber-outsider, not only because he takes on the Jewish identity of another--following the dictates of the Jewish mother who avers that man is only smart if he is able to shed his identity--but also because his own identity is unclear even in his home village, where he is the one who doesn't belong, the one who is "adopted," possibly even the son of a collaborator.  Is the Jewish mother a metaphor for Jewish Israel, eroding Arab identity by offering the blandishments of a "better" way of life, but only at the cost of annihilating one's heritage?

Second Person Singular is the work of an accomplished and eminent Arab citizen of Israel, a talented writer with exceptionally sensitive insight into the Arab condition, and a deeply cynical and acute understanding of the Arab-Israeli impasse. In less capable hands, the alternating plot twists might seem so bizarre, so obvious a gimmick as to lose credibility, and try the reader's patience. But Kashua knows whereof he speaks: like his lawyer-protagonist, Kashua is the product of an outstanding Israeli education (a select high school in West Jerusalem and philosophy and sociology at Hebrew University), who lives in Jerusalem with his wife.  The prize-winning author in addition to Second Person Singular of Dancing Arabs (2001), Let it be Morning (2006) and most recently, Exposure (2013), he is perhaps most well-known for his satirical television sitcom," Avoda Aravit" ("Arab Labor"). The wildly popular program follows the often hilarious attempts of an Arab couple to assimilate into Israeli Jewish society, but like Second Person Singular, it has a darker message beneath the surface. Similar to the American sitcom "All in the Family," to which it is often compared, "Arab Labor" provides a podium for exposing the racism at the core of Jewish-Arab relations in Israel.

In Kashua's hands, the narrative of Second Person Singular is plausible no matter how exaggerated, in part because it is embedded in the multi-dimensional Arab-Israeli experience.  Equally important, however, is Kashua's detached voice, rendering the characters and their circumstance plausible.  The very absence of drama highlights the author's vision and sensibility, at once objective and humane.