This week, Alpher discusses the new Middle East reality Israel confronts as a consequence of the US-Russian deal regarding Syria's chemical weapons, what lessons and conclusions can be taken from the massive commemoration in Israel of the 40 years since the outbreak of the 1973 war with Egypt and Syria, the significance of a ruling by an Israeli judge two weeks ago concerning Palestinian incitement against Israel, and the contribution of Osama al-Baz, who died Saturday in Egypt, to peace.

Q. What new Middle East reality does Israel confront as a consequence of the US-Russian deal regarding Syria's chemical weapons?

A. On the face of it, Israel is about to see a traditional enemy on its northern border lose its dangerous chemical weapons arsenal, and this is good news. But the Lavrov-Kerry agreement also raises a host of issues and questions that at this juncture can only be noted with concern by Israel as topics to be monitored closely in the months and possibly years ahead.

First and foremost is the question of the roles to be played by Washington and Moscow in the Middle East. Was the drama we witnessed in recent weeks yet another stage in America's withdrawal from an active security role in the region, or was it an instance of the successful leveraging of military strength to gain a strategic achievement and allow others--Moscow--to share the dirty work? Turning to Russia, is it now once again the superpower patron of Syria--the new "address" for Israeli and US complaints and concerns?

Certainly the maneuvering leading up to this agreement treated observers to radically contradictory concepts of America's role in the Middle East. Was this one more step in Washington's "war weary" withdrawal, following Afghanistan and Iraq, as many Israelis and Arabs saw it? Or were American preparations to launch a "limited" attack on Syria really a cover for yet another Arab regime-change operation following Iraq and Libya--as the Russians and possibly Syria understood?

Second, will this agreement, which is impressive and comprehensive in its scope, actually work or will it unravel in the mayhem of Syria's civil war? Can Russia indeed now command Bashar Assad to do its bidding, to the extent of conceding his strategic weaponry, or are we witnessing clever Syrian and Russian smokescreens? If the latter, will the US eventually make good on its threat to attack Syria, or is the message of recent presidential hesitations and congressional and public opposition that this will never happen on President Obama's watch?

This brings us to Iran. The stage seems to be set for a new and more promising round of negotiations over Iran's nuclear program, with a seemingly moderate and reasonable Iranian president meeting an American-Russian coalition intent on solving yet another Middle East non-conventional proliferation issue through peaceful means. Obama even insists that the option of American military action against Iran is still on the table. Does Iran see it that way? Does Russia?

The Israeli political leadership has issued declarations in recent days to the effect that Israel understands it must be ready to go it alone militarily against Iran if diplomatic efforts fail. This seemingly reflects a loss of confidence in the Obama administration's commitment to its "red lines"--one that can only conceivably be dispelled by means of a rapid and successful outcome in disarming Syria of its chemical weapons.

Q. Saturday, Yom Kippur, marked 40 years to the outbreak of the 1973 war with Egypt and Syria. What lessons and conclusions do you take away from the massive commemoration of this event in Israel?

A. Israelis are swamped by annual commemorations of our many wars and far fewer peace agreements; it's hard to avoid them and easy to become cynical about them. What made this particular anniversary different and more powerful in its effect on the public was the release by the state archives of transcripts of remarks and conversations among the political and military leadership of 1973 in the early days of the war that attest to the near-total disillusion and despair that overwhelmed them.

One key lesson of the 1973 Yom Kippur surprise that apparently can never be repeated too often is to remain alert and at all costs avoid an attitude of hubris and condescension toward our enemies--both the identifiable and the potential--and toward our neighbors in general. This is easier said than done. Certainly, the attitude of key pro-settler elements in the Netanyahu government toward the Palestinian population of the West Bank and East Jerusalem--sometimes extended to Jordan as well--appears to be one of pure hubris and condescension. Even the admonitions of our best friends in the West and here and there (Amman, Cairo) the Arab world are simply brushed off.

History generally does not neatly repeat itself. What happened in 1973 probably won't happen again. The next surprise that visits a smug Israeli leadership will undoubtedly be different. This observation is all the more timely in view of the additional revelations that have been presented to the public on the occasion of this anniversary.

During the two years leading up to October 1973, Egypt's President Sadat sent provisional peace feelers to Israel through American good offices. Sadat's messages may have been flawed, and certainly suffered from Cairo's refusal to deal directly with Israel. But PM Golda Meir and Defense Minister Moshe Dayan, intent on winning an election and happy to argue "better Sharm al-Sheikh than peace", rejected them without even informing the Israeli Cabinet or the security establishment. Henry Kissinger, first as US National Security Adviser and later as Secretary of State as well, appears to have connived to let the Yom Kippur War "bleed" Israel in its initial phase because he saw a painful war as perhaps the only possible catalyst for Israeli-Egyptian peace.

Unraveling this complex of plots, ignorance and legitimate doubts is messy, to say the least. But there is one obvious lesson: we should be looking harder for peace, even when it appears unlikely.

Q. What is the significance of a ruling by an Israeli judge two weeks ago concerning Palestinian incitement against Israel?

A. In a Tel Aviv district court, Judge Dalia Gannot rejected legal claims against Palestinian officials for inciting other Palestinians to commit the terrorist murder of an Israeli some ten years ago. The case, brought by the victim's family, was based primarily on the research carried out by Itamar Marcus, founder of Mabat, a watchdog group that monitors the Palestinian media. Gannot, after immersing herself in Marcus' research, ruled that the instances of incitement he cited were relatively minor and highly selective and relied primarily on marginal Palestinian publications that do not faithfully represent the Palestinian Authority or the Palestinian mainstream.

This is an important ruling. Marcus and others on the political right have been trying for years--not without success--to convince Israelis that the Palestinian leadership in the West Bank incites against Israel and that Israeli-Palestinian peace cannot be based on a firm foundation until and unless the incitement stops. The fact that they cherry-pick incendiary statements and articles has largely gone unnoticed by Israeli leaders from Netanyahu on down, who complain frequently about Palestinian incitement. Nor have most of these "watchdogs" ever paid much attention to incitement against Palestinians on the part of Israelis, ranging from Avigdor Lieberman and Shas leader Ovadia Yosef to the curricula of religious and Haredi educational institutions.

Gannot's ruling does not ignore the existence of incitement on the part of Palestinians. But it does call Marcus an "incompetent" witness and label his extensive "research" efforts inadequate for proving that Palestinian incitement against Israel and Israelis plays the central role that the Israeli right insists upon. One can only hope that the ruling will contribute to a saner and more balanced approach to the issue of incitement on both sides.

Q. Osama al-Baz died Saturday in Egypt. What was his contribution to peace?

A. I met al-Baz many times over the years, at conferences in Europe, in Israel, and in his office at the Foreign Ministry in the heart of Cairo. We once stripped off our shirts in Aspen, Colorado, to compare bypass operation scars. As a close adviser to presidents Sadat and Mubarak, he was a consistent advocate for peace, both at the bilateral Egyptian-Israeli level and with regard to the Palestinian issue. He was unorthodox in style and always ready to think "outside the box". Yossi Beilin related on Sunday that when he was minister of justice under PM Ehud Barak, he and al-Baz used to fly to London, each from his own country, for Saturday brainstorming meetings at a Heathrow hotel, then fly home the same day.

Mubarak dispensed with al-Baz's services a few years ago. According to the press, it was because al-Baz had sounded an alarm about the rising popularity in Egypt of the Muslim Brotherhood. Al-Baz's health was also fading. The "Israel file" was given to General Omar Suleiman, who died at the height of the revolution. By the time the Egyptian revolution broke out in Cairo's Tahrir square in January 2011, al-Baz was ready to join the demonstrators. According to the Egyptian press, he used the occasion to speak enthusiastically and very candidly about the peace with Israel, advocated working closely with Jerusalem on the Palestinian and other issues, and pointed to Hamas as the joint enemy of both Egypt and Israel.

He will be missed. 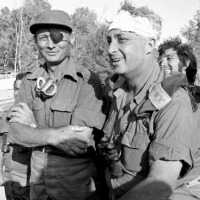