Peace Now's Anat Ben Nun in Newsweek: Israel’s NGO Bill is an Attempt to Crush Critics of the Government 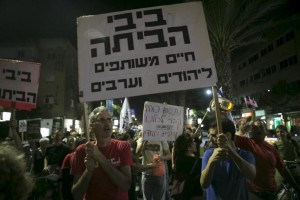 Unable to deliver real solutions to the ongoing violence, Israeli governments have been trying for years to blame the messengers rather than take responsibility for their own policies. Last week, this practice was taken to the next level when a ministerial committee approved the NGO bill, proposed legislation targeting specifically peace and human rights organizations.

Under the pretense of increasing transparency on donations received from foreign governments, the bill’s actual intention is to delegitimize any organization that criticizes the government's policies. According to the proposed legislation, members of left-leaning organizations, who already submit quarterly reports on donations from foreign governments, will be obligated to wear special badges and to identify themselves as “foreign agents.”

If the proposed legislation is truly aimed at increasing transparency, it must require all NGOs to expose their funding sources, instead of denouncing left-wing organizations, which are already held to higher transparency standards.

A Peace Now study examining the funding of nine pro-settler NGOs reveals that 94 percent of the donations to these organizations in 2006-2013 were nontransparent. Out of 495.4 million shekels ($126 million) donated to them during the years studied, it was impossible to identify the names of the individuals or bodies who donated 464.8 million ($118 million).

While a majority of the donations to the organizations studied were received from individual donors—predominantly from the United States—many additional millions reached these organizations through Israeli government ministries and local municipalities. It is clear from this data that both American and Israeli taxpayers contributed to the right-wing agenda and the settlement enterprise, and not necessarily willingly. This occurs through the subsidizing of tax-deductible donations in Israel and the U.S. and through the transferring of state funds derived from taxes paid by every Israeli citizen.

Let us take for example Im Tirzu, an organization responsible for an inciting billboard and newspaper campaigns against specific human rights activists, whom it referred to as foreign agents and assisting terrorism. Only 12 percent of the donations to Im Tirzu in the years studied were fully transparent, and the vast majority of donations to this organization came from American organizations with a tax-deductible status, such as the Central Fund for Israel and the One Israel Foundation. It may be worth noting that the former fund also transferred donations to the Honenu organization, which receives tax-deductible donations even though it provides cash grants to convicted Jewish terrorists.

Or how about the ElAd organization, an NGO working to establish settlements inside Palestinian neighborhoods in East Jerusalem in an effort to prevent the possibility for a future peace solution in the city? In the years studied, 97.8 percent of ElAd’s donations came from abroad. A list of those donating over 20,000 shekels ($5,000), as required by law, has not been submitted to the authorities since 2005, and even then, the list was granted due to an investigation by the registrar for associations. Given that the origins of ElAd’s foreign funding sources are unclear, why is it that only left-wing NGOs are required to submit quarterly reports and are now told that even that is insufficient?

Finally, let us look at the Samaria Settler Council, a nongovernmental organization working alongside its local municipality in the Occupied Territories. The Samaria Settler Council is notorious for the video it published last year attacking left-wing organizations using Nazi motifs. This group is surprisingly 100 percent transparent, and no less than 97.6 percent of its funding comes from Israeli taxpayers’ money. The Council enjoys government funding from the budget of the Ministry of Interior, as well as from transfers originating in other government ministries. Thus, we Israeli citizens are forced into funding its inciting propaganda.

The NGO bill cannot be taken at face value. Rather, it must be understood as part of an orchestrated campaign to silence dissent. This campaign is influencing the Israeli public discourse, and creating the type of toxic atmosphere which recently allowed a young Israeli to try to attack protesters in a Peace Now demonstration. Together with incitement against Israel’s Arab population, the modification of civics education, and the banning of a book describing a Jewish-Palestinian love affair from literature classes, Israel is sacrificing its essential democratic values on the altar of continued rule over the Palestinians.