No, not again: Peace Now still. Indeed, in words we rarely allow ourselves to use, Peace Now, now more than ever.

Because, however halting it may be, there is movement in the direction of peace between Israel and the Palestinians.

Both Secretary of State Kerry and President Obama have made it clear, publicly and in private, that success depends on the existence of an active "constituency for peace."

Americans for Peace Now is a critical part of the constituency that Secretary Kerry and President Obama have in mind. They turn to us for counsel on both the broad outlines and the delicate nuances of advancing a two-state solution to the chronic conflict, as do hundreds of members of Congress, senior officials at the State Department and influential opinion and news publications. They turn to us knowing that APN is there, ready to connect key players, here and in Israel.

In Israel, Peace Now (Shalom Achshav) is the country's largest peace movement. Peace Now's Settlement Watch Project and its director, Hagit Ofran, are recognized worldwide as the authorities on settlements in the West Bank and East Jerusalem. This expertise has led to a growing demand from Israelis who want to see the settlements up close, resulting in fifteen Shalom Achshav volunteers leading educational settlement tours.

This year, Peace Now launched "Peace at the Bar," a series of briefings by experts and politicians on the current peace efforts, proving very popular with young people across Israel. And Peace Now's legal program this year boasted a number of successes in court, against illegal settlement outposts and in support of Palestinian land-owners who are trying to protect their property rights.

The recent Pew Center study of American Jews found that 61 percent believe that a way can be found for Israel and an independent Palestinian state to coexist peacefully, even though about half do not think the current Israeli government is making a sincere effort to bring about a peace settlement. And a 44 percent plurality say the continued building of Jewish settlements in the West Bank hurts the security of Israel.

We'll take those numbers - and build on them. They are testimony to Peace Now's Settlement Watch project, and to APN's success in countering the extreme right's anti-two-state propaganda.

We do that work by educating America's pro-Israel community, as well as policy-makers and policy-shapers in Washington. This year for example, APN distributed thousands of copies of our "They Say, We Say." This publication takes common arguments put forth by peace skeptics and opponents and provides authoritative answers from the pro-Israel, pro-peace APN perspective. It is available to you on APN's website here.

And recently, we launched a vast online research center - among the largest of its kind - an intellectual treasure trove for students and faculty, and for all Middle East peace enthusiasts, activists and curious minds. You can access it at peacenow.org/researchcenter.html.

In order to achieve a two-state solution, which is a necessity if Israel is to remain democratic and Jewish, there must be a constituency for peace.

That is why we turn to you now and ask, with urgency, that you renew or start your support for our work. Now, more than ever, it matters. Your tax deductible contribution will support APN as we educate and assert the merits of a two-state solution and how the occupation has become a land-grab, not a matter of security for Israel.

Put most simply: You have the chance, through your support of APN, to play a part in history. May ours be the generation that witnesses, at long last, a final status agreement between Israel, the Palestinians and the rest of the Arab world. And may you not be merely a witness to that great day, but among those who help it dawn.

P.S. Israel's achievements are astonishing - in science, technology, agriculture and medicine. To all of Israel's great achievements, we are determined to add one more: A negotiated settlement that ends the occupation and provides security and democracy for Israel and the Palestinians.

LEONARD FEIN is a writer and teacher. In 1974, he founded Moment magazine, and served as editor and publisher for 13 years. In 1985, he founded Mazon: A Jewish Response to Hunger, and in 1996, he founded the National Jewish Coalition for Literacy. His book Israel: Politics and People was a required text in all Israeli universities for 10 years, and thousands of his articles and essays have appeared in dozens of newspapers, magazines, and journals. He writes a syndicated OpEd column for the Forward and is a longtime member of APN's Board of Directors.

MIK MOORE, an APN Board Member, is recognized as one of the leading digital media campaign strategists in the United States. He develops online campaigns for social change nonprofits, leaders in the philanthropic community and elected officials. Mik co-founded the pro-Obama Super PAC responsible for many of the most viral videos of the 2012 and 2008 campaigns, including The Great Schlep and Let My People Vote with Sarah Silverman. Mik earned a law degree from Georgetown University Law Center and a BA in History from Vassar College. He lives in New York City with his wife, Deborah, and their two children. 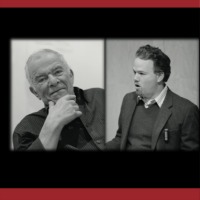 Play a Part in History
It is not what one says, but rather what one does...
The Bulldozing of Hope
APN's "What Would Leibel Do (WWLD)?" Awards Dinner - Boston
A Long Line of Worriers
We're the Antidote to the Extremists
The best deal on Black Friday is hope