It is not what one says, but rather what one does...

The stakes are high. While many persist in comparing the Israeli-Palestinian conflict to a schoolyard brawl, Israelis and Palestinians are struggling with matters of life and death. The question of the possibility of peace holds existential ramifications.

The broad strokes of a negotiated settlement between Israel and the Palestinians have been well known for decades - two states, Israel and Palestine, side by side, broadly based on the pre-1967 lines with agreed-upon land swaps. Israel's security needs will be addressed and anchored in a treaty and safeguarded by a powerful IDF.

President Obama reaffirmed this sensible vision in March when he addressed the Israeli public and the world in Jerusalem. And with his backing, Secretary of State John Kerry has willed the parties back to the negotiating table.

This is a stunningly delicate process. Unforeseen events in the region, unilateral actions by either party or even just a failure of political will and imagination can lead to a breakdown in talks at any moment.

This is where Americans for Peace Now and Shalom Achshav in Israel come in.

Shalom Achshav was founded in 1978 to mobilize public support for Israel's peace treaty with Egypt. Since then, it has played a key role in spurring the Israeli public and its leaders towards further peace treaties.

Shalom Achshav is widely known for its Settlement Watch program, the premier civilian source of impartial information about the expansion of Israel's settlements in the territories, which serve now as a physical and political barrier to a two-state solution. Settlement Watch carefully monitors the growth of the settlements, tracking information that would otherwise be extremely difficult to maintain.

Shalom Achshav's legal advocacy challenging settlements in Israeli courts gets results. Since 2005, when Shalom Achshav began petitioning against illegal outposts, no new outpost has been established in the West Bank and the number of houses built on private Palestinian lands has fallen dramatically.

In the United States, Americans for Peace Now (APN) provides nearly half of the funding for Israel's Peace Now and helps make possible the actions, research and legal advocacy that assists peace-seeking Israelis in taking back the middle ground.

Every week brings a healthy dose of bad news from the region -from the stubborn growth of Jewish settlements to distorted history in Hamas textbooks, from Jewish "Price Tag" attacks on Palestinians to public celebration of Palestinians who committed acts of terror against Jews. Those looking for despair can easily amass supportive evidence.

But instead of apathy and resignation, many of us have chosen action and hope. That's why I support Peace Now, which since its inception has been pushing for peace with a balanced approach, reminding the Israeli public that the status quo -the continued occupation of the West Bank- threatens the very existence of the Jewish state.

Americans for Peace Now is not Pollyannaish; their brand of hope is based on a rational and constructive view of the Israeli-Palestinian conflict. Thousands of people turn to APN's website, www.peacenow.org, for information, analyses and the opportunity to learn more. Joining APN on Facebook and Twitter are further ways to be connected.

Follow APN's calls to action online. Talk to your friends about the middle ground that Peace Now is trying to reclaim. See how settlements have proven disastrous for Israel. Read why a two-state solution will preserve Israel's Jewish and democratic character.

Israelis and Palestinians deserve to live normal, dignified lives that are not governed by conflict, violence, humiliation and de-humanization. They deserve leaders who leave no stone unturned in pursuit of peace, and supportive world leaders who will make sure that they keep their eyes on the prize: a PEACEFUL resolution to this conflict.

There are few things more important to me than seeing the survival of Israel as a democracy and as a Jewish state, which is why I'm not giving up in the fight for peace. This is a critical moment for our voices to be heard, for our support to be felt. Join me in supporting Americans for Peace Now with a tax-deductible donation.

P.S. As I am drafting this letter, Shalom Achshav (Peace Now in Israel) achieved another important victory, with the Israeli High Court ruling emphatically in favor of its case to evacuate several illegal outposts in the West Bank. It is written in Pirkei Avot (1:17) "It is not what one says, but rather what one does, that makes all the difference in the world." Shalom Achshav and APN are making a difference. You can too. Let's not just wish peace; Let's help do it. 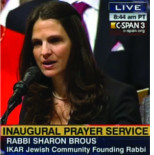 RABBI SHARON BROUS In 2013, Rabbi Sharon Brous was recognized as the most-influential Rabbi in the United States by Newsweek and the Daily Beast, and as one of the Forward's 50 most-influential American Jews. In 2013 Brous blessed the President and Vice-President at the Inaugural National Prayer Service. She sits on the faculty of the Hartman Institute-North America, Wexner Heritage and REBOOT. She serves on the board of T'ruah -The Rabbinic Call to Human Rights, is a rabbinic advisor to American Jewish World Service and Bend the Arc. She received the Lives of Commitment Award from Auburn Theological Seminary, was a JWI Woman to Watch and was the inaugural recipient of the Inspired Leadership Award from the Jewish Community Foundation of Los Angeles. In 2004 Brous, Melissa Balaban and a handful of young, entrepreneurial Jews realizing they shared a passion for meaningful and intentional Jewish engagement, social justice and really good fair-trade chocolate, set out to create IKAR - now one of the fastest growing Jewish communities in the country. 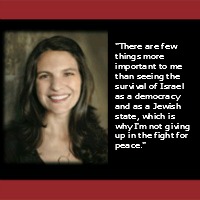 Leonard Fein, Mik Moore
Tu Bishvat: We are planting for the future.
Play a Part in History
The Bulldozing of Hope
"It's too much of luxury not to speak with our enemies." A letter from Dror Moreh, Director of The Gatekeepers
A Long Line of Worriers
On Purim 2016: "Not in every hour does a miracle happen."