APN's Lara Friedman at The Jewish Journal: Why the Israeli-Palestinian peace talks must work

Cynicism about new Israeli-Palestinian peace efforts comes in a variety of flavors.

There is the lazy cynicism of allegedly objective pundits: "Only a fool would believe that this could work." There is the cowardly cynicism of the disillusioned: "I won't be fooled again!" And there is the malicious, smirking cynicism of crypto-peace opponents: "It's foolish to think this can ever work, or that the Palestinians can ever be trusted, or that settlers can ever be removed." What the latter really mean, of course, is: "I want this to fail, and this is my way of helping."

Let's be clear: The current Kerry-backed peace effort is probably the last, best hope for achieving Israeli-Palestinian peace in this generation. The situation on the ground -- code mainly for settlement expansion -- is nearing a tipping point after which a two-state solution will no longer be available (many settlers gleefully argue the point has already been passed). The end of the two-state solution doesn't then magically create some new alternative -- it just plays into the hands of zero-sum extremists on both sides, with devastating implications for everyone else. Until eventually, perhaps after another generation or more of Israeli-Palestinian mutual bloodletting and mutual efforts at delegitimization, both peoples come to a realization, as they did in the 1990s, that their respective aspirations for peace, security, self-determination and a better future for their children will only be realized at the negotiating table.

For anyone who truly cares about Israel and Israelis -- as opposed to those who prioritize land over peace, settlements over security, and Greater Israel over Israel's good standing in the community of progressive, democratic nations of the world -- must recognize that the stakes today are too high to give in to self-indulgent cynicism and self-protective defeatism.

Yes, there are reasons for skepticism about the current peace effort. The provocative and self-defeating march of Israeli settlements goes on. The release of Palestinian prisoners is reopening painful wounds for Israelis across the political spectrum. And rhetoric that is inconsistent with a commitment to peace and coexistence continues to emanate from both sides.

At the same time, there are compelling reasons to believe that this new peace effort can succeed, starting with the personal investment of President Barack Obama and Secretary of State John Kerry, backed by power-hitters like Special Envoy Martin Indyk, leading negotiations, and Gen. John Allen, focusing on Israeli security issues. The Quartet and Tony Blair remain active, focusing on economic issues, and the European Union and the Arab League are playing positive supporting roles.

Likewise, there are solid reasons to believe that this effort is serious. Both sides have publicly committed to negotiating for nine months. Neither side wants to be the one that walks away and is blamed for destroying the process -- creating a negotiations-preserving dynamic. Moreover, the parties have agreed to secrecy, insulating the effort from destructive real-time "crowd testing." And finally, these negotiations are taking place in the context of unprecedented recognition of both the fact that the window is closing on the two-state solution and that achieving the two-state solution is a vital U.S. national security interest.

It is also clear that Israeli Prime Minister Benjamin Netanyahu can deliver if he wants to. He has the trust of the majority of the Israeli public, strong Knesset support for entering talks, and, if cornered by right-wing members of his coalition, he has a new pro-peace coalition available. Likewise, Palestinian President Mahmoud Abbas can deliver if he wants to and if the agreement on offer from Israel is indeed serious. Abbas is a founder of the Palestinian national movement, committed to nonviolence, and has long experience negotiating with Israel. He ran for president of the Palestinian Authority on a platform that centered on his commitment to negotiate a two-state agreement with Israel, and, according to former Prime Minister Ehud Olmert and former (and current) Israel negotiator Tzipi Livni, went a long distance toward doing exactly that.

Finally, recent reports of a single poll notwithstanding, polling has shown, year after year, that both peoples want peace and would support the compromises necessary if packaged together as an end-of-conflict-end-of-claims agreement.

At this time, we would do well to recall the words of Yitzhak Rabin, who famously said that he would "fight terrorism as if there is no peace process" and "pursue peace as if there is no terrorism." Today, the greatest threat to peace efforts is not terrorism, but cynicism, skepticism and spoilers on both sides. In this context, Rabin's wise formula becomes: "We must fight skepticism and spoilers as if there are no peace negotiations, and we must doggedly support the pursuit of peace at the negotiating table, refusing to allow skeptics, cynics and spoilers to demoralize us or distract us from our goal."

This article first appeared in the Jewish Journal on August 14, 2013. 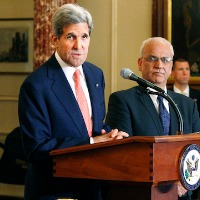