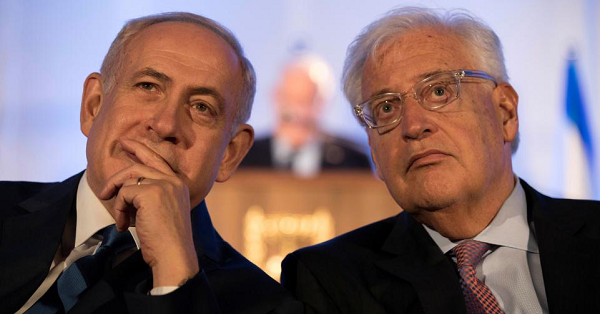 In a video interview with Israeli news service Walla News, referring to Israeli settlements in the occupied West Bank, Friedman said: “I think that the settlements are a part of Israel.”

APN’s President and CEO Debra DeLee said: “These statements by the official representative of our country in Israel are outrageous, unacceptable, and flat-out wrong. Let’s begin with Ambassador Friedman’s apparent determination that the settlements are ‘a part of Israel.’ This is a complete fabrication. Israel’s government has never annexed the West Bank. Israel’s own Supreme Court regards the territory as being held under ‘belligerent occupation,’ as defined by international law. Accordingly, it has never been the position of the US government that either the settlements or any other part of the West Bank belong to Israel.

“Then we have Friedman’s repetition of the canard, a common talking point of settler apologists, that Israel occupies only 2% of the West Bank. According to long-held US policy comporting with international law, all territory captured by Israel from Jordan in 1967 is occupied territory, under dispute, the permanent status of which will be determined in negotiations between Israel and the PLO, serving as representative of the Palestinian people.

“Defenders of settlements cite this figure because it reflects the physical footprint of the built-up area in settlements that Israel has constructed in the West Bank. But as Friedman must know, Israel’s control of the West Bank – geographically, topographically, politically, economically, and in any other way imaginable – cannot be dwarfed into his two-percent figure. Even if Friedman is merely referring to areas in the West Bank that are under the control of settlements, the figure is actually 10% and if he is referring to areas exclusively reserved to Israelis, which are no-go areas for Palestinians, the figure is 40%. Americans should be appalled to hear our ambassador parrot this disingenuous argument, in effect revealing himself as a spokesman for the extremist ideological settler population, rather than a faithful representative of the US government.

“Before he became ambassador, David Friedman made a series of inflammatory statements on this issue, for which he had publicly apologized, at his Senate confirmation hearing, and promised to change his ways. However, this is not the first time that as ambassador he has made statements that contradict America’s policy in this volatile part of the world.

“Thus, today’s interview merely confirms that there is no difference between David Friedman as ambassador and David Friedman the flame-throwing pundit for Israel’s extremist, far-right settler news site, Arutz 7. The truth is simple: Friedman is an obstacle to peace, a source of provocation and instability, and is therefore unfit to serve. We call on President Trump to immediately recall him from Tel Aviv and replace him with a person who would better serve our national interests in this sensitive and vital post.”