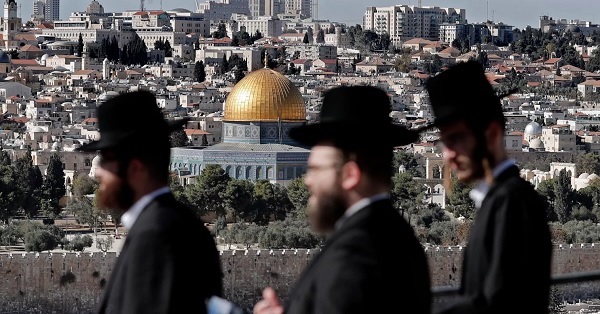 Quote of the day:
"In any other country, this statement would have been considered incitement to violence, but in Israel it is a voice that represents many - the belligerent, capricious and violent voice that calls for the destruction of all enemies."
--On Mako-Channel 12 Website, commentator Michal Yisraeli responds to the statement by TV presenter Avri Gilad that Jews sometimes need to be violent towards innocent Palestinians.*
You Must Be Kidding:
In an attempt to brand Israel in an original, new way in the world, an Israeli PR company has brought six celebrity dogs from North America, who have thousands of followers each on social media, to participate in a doggy vacation in Israel.**

Breaking News:
Israel Strikes Assad Regime Military Target in Syria, Foreign Media Reports
Israel reportedly attacked a military scientific research center in the Jamraya area on the outskirts of Damascus late Monday night, according to media affiliated with the regime of Syrian President Bashar Assad. (Haaretz and Ynet)
Front Page:
Haaretz
Yedioth Ahronoth
Maariv This Week (Hebrew links only)
Israel Hayom
News Summary:
David Bitan, the coalition whip and close ally of Prime Minister Binyamin Netanyahu, said he wouldn’t resign despite the corruption investigation opened against him this week on suspicion of taking bribes in the millions and against his wife for money laundering, while a police source told Maariv that "David Bitan has finished his political career" and five top Likud members quietly planned to dismiss Netanyahu, according to Yedioth’s Yoaz Hendel and in Jerusalem, security forces went on high alert ahead of a possible unilateral declaration by US President Donald Trump Wednesday that Jerusalem is the capital of Israel, while many warned against it. Barely mentioned in the news, was the ongoing violence between settlers and residents of the Palestinian village of Qusra.

As journalists from around the world arrived in Israel ahead of the expected announcement from Trump about Jerusalem, Israel has remained silent (albeit increasing security forces), but internationally, many have called on Trump not to unilaterally declare Jerusalem the capital of Israel and not to move the US embassy to Jerusalem. Yesterday, Trump delayed the decision about the embassy move. French President Emmanuel Macron told Trump he was worried about the effects of such a declaration and Saudi Arabia's ambassador to the US said any Trump move would hurt the peace process and heighten regional tensions. Turkey said recognizing Jerusalem as Israel’s capital would cause a catastrophe. Israeli Arabs said they ‘won't sit passively' if Trump names Jerusalem Israel's capital, Jerusalem Post reported and the organization of Muslim nations called for a summit if he did, saying it would be a ’blatant attack on the Arab and Islamic nations.' Even ex-Israeli Ambassadors urged Trump's envoy Jason Greenblatt to convince Trump not to do it.

The Hebrew newspapers took very different views of what happened Monday when far-right extremist Jewish activists marched to the West Bank village, where one settler killed a Palestinian farmer last Thursday in circumstances still in dispute during a bar-mitzvah hike in the West Bank that did not receive military approval. Haaretz and Times of Israel reported that the extremist Jews from a radical group called Otzma Yehudit (Jewish Power) marched into the village of Qusra to return to the scene of last week's deadly incident and Palestinians threw stones at them and Israeli soldiers showed up and a Palestinian young man was shot and seriously wounded,but it wasn’t clear whether the soldiers or settlers shot him. Yedioth’s settler affairs reporter, Elisha Ben-Kimon reported that the family who held the Bar-Mitzvah hike were going to do it again on Friday to give their son a better experience. Ben-Kimon reported in the print Yedioth that the ‘Jewish Power’ extremists tried to enter the village of Qusra yesterday. But in an article on Yedioth’s sister Ynet website, Ben-Kimon accused the villagers of Qusra of inciting against the settler (from the extremist Yitzhar settlement) who shot the Palestinian farmer, Mahmoud Odeh, because on a Facebook page called ‘Qusra Now,’ they posted a photo of the settler and noted that he was the one who killed Odeh and also noted that the Samaria Regional (settler) Council head Yossi Dagan had decided to award the settler a medal of valor. Moreover, while it was established that Odeh was uninvolved in the stone-throwing dispute with the hikers last Thursday, Ben-Kimon called the farmer a ‘Palestinian rioter’ and wrote that he was “among a group of Palestinian rioters throwing rocks at a group of some 20 Israeli children who were on a bar mitzvah trip in the area last week.” Maan reported that the Palestinian, Ahmad Fayiz Hasan, 24, was critically injured. An Israeli army spokesperson told Ma’an that “hundreds of Palestinians in Qusra began rolling burning tires and throwing rocks at Israeli forces.” When questioned on the reports that the clashes broke out only after dozens of settlers raided the area under the protection of Israeli forces, the spokesperson said she was “aware of Israeli civilians in the area,” but did not comment further.

Features:
“I told the organizers of the Ma'apilim - 'If I'm not paid, I’ll volunteer' "
Hundreds of Americans turned overnight into sailors and brought tens of thousands of immigrants to Israel, but were never recognized for their activities. Now that’s going to change. Murray Greenfield talks about the recruiting, sailing and the revenge against the British. (Oz Rosenberg, Maariv)
'It took them 10 minutes to destroy what I built in a lifetime'
Ever since the Rajbi family home was demolished by Israeli authorities two weeks ago, the children have been staying with relatives, while the father sleeps in a tin hut next to the rubble. This is what it looks like when Israel turns its Palestinians into criminals against their own will. (Orly Noy, +972mag)
Steve Bannon's Best Jewish Friend: Morton Klein's Rise to Prominence in the Trump Era
He’s been president of the Zionist Organization of America for over 20 years but has never had as much influence as now – but at what price, critics ask. (Dina Kraft, Haaretz+)
Looted from Beirut 35 years ago, now on display in Tel Aviv
‘Looted and Hidden’ digs through the archive of films taken by the Israeli army in 1982, and shines light on more property stolen by Israel: the history of Palestinian cinema. (Rami Younis, +972mag)

Interviews:
'I tried not to scream, I was afraid they’d hit me even harder'
An Israeli raid on Al-Aqsa compound earlier this year turned violent when hundreds of Palestinian worshippers were beaten, arrested, and marched barefoot through the streets of Jerusalem. Now two young men describe the brutality they faced that night, and the humiliation they encountered while in custody. (Interviewed by Yael Marom in +972mag)