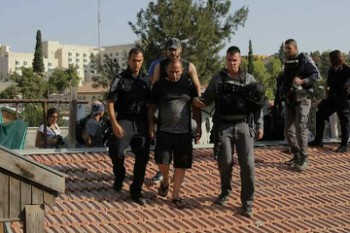 On September 5th, 2017, everything changed for the Shamasneh family.

Forcibly removed from their East Jerusalem home in the middle of the night by Israeli police, it was only an hour later that this Palestinian family of ten found their house was occupied by Jewish settlers, radical ideologues sent to seize the property their organization had taken over through various legal maneuvers.

Since then, the Shamasneh family has been scattered and their lives upended, all in service of an extremist right-wing agenda to gradually take over Palestinian neighborhoods of East Jerusalem.

We won't stand idly by, and you shouldn't either.

Americans for Peace Now is joining forces with Israel's Peace Now movement and other Israeli activists to respond to the disenfranchisement of Palestinians and the settler takeover of East Jerusalem. We have started a new crowdfunding campaign, Shelter for the Shamasnehs, to help bring the Shamasneh family back together in a new home.

The Shamasneh family needs your help. You can help give them a roof over their heads, provide a place for their family to be together again, and send a powerful message that – with the support of Americans like you – Israelis and Palestinians can one day co-exist peacefully.

Have you seen the video?
Imagine this was your family
A Long Line of Worriers
They wrote: "Death to the Police"
I almost lost my Hamantaschen
Bibi's gift – and ours
Fight the Darkness