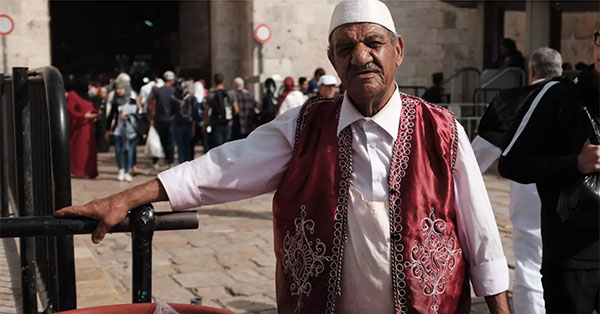 Quote of the day:
“Fifty years I’m here – since the Jordanian era. There are adults who bought from me when they were children. I don’t know what they want.”
—Like other Palestinians in E. Jerusalem, Marwan Sumara, 77, who sells juice in the Old City dressed in a white fez and traditional vest during Ramaddan, says Jerusalem Municipality officials are picking on him now and they didn’t in the past. Some think that the U.S. Embassy move to Jerusalem has emboldened Israeli authorities to act more aggressively towards the city’s Palestinian residents.*
You Must Be Kidding:
Israeli security guards at airport in Greece strip-search Arab Israeli couple before flight to Israel and demand to see their marriage license.**
Front Page:
Haaretz
Yedioth Ahronoth
Maariv This Week (Hebrew links only)
Israel Hayom

News Summary:
The Trump-Kim summit in Singapore, which Hebrew newspapers had no information about since they were printed before the meeting took place, a stabbing attack by a Palestinian youth in Afula, who severely wounded an Israeli high school student, the indictment against a daycare center assistant, who caused an infant to suffocate to death and reportedly “abused babies routinely,” and the great success at the Tony Awards of “The Band’s Visit,” a musical based on an Israeli screenplay, were today’s top stories in the Hebrew newspapers. Also the military analysts had much to say about IDF Chief of Staff Gadi Eisenkot’s decision not to promote controversial religious commander, Brig. Gen. Ofer Winter. (See Commentary/Analysis below - especially Yossi Melman and Amos Harel). Also, Yedioth noted in its headlines that “Prince William will divide Jerusalem - he will go to the Mt. of Olives ‘in the Palestinian Authority.’” According to the report: “The historic visit of Prince William in Israel is meant to be neutral. However, Kensington Palace announced that the prince will visit sites, such as the Mt. of Olives and the Old City, as part of his trip to the Palestinian Authority. A source in the British Foreign Ministry told Yedioth: ‘E. Jerusalem is not Israeli territory.’” During the four-day trip to the region, the first official visit by a member of the British royal family, the Duke of Cambridge will meet Netanyahu and Abbas. In E. Jerusalem, he will visit the Mt. of Olives and the Church of St. Mary Magdalene and pay respects at the tomb of his great-grandmother Princess Alice, which is located in the Garden of Gethsemane. All the visits in E. Jerusalem are listed as under the visit to the Palestinian Authority. (See also Israel Hayom)

Features:
‘I wanted no more of it’: Driven Out by Rising Extremism, More Israelis Are Leaving Orthodox Judaism
Religious Zionists leaving the fold say they are increasingly accepted by their families, as community’s push for stricter observance and hard-line views leads more young people to become secular. (Judy Maltz, Haaretz+)
What Israel's top economist thinks of Trump's trade wars
Prof. Elhanan Helpman won't say, but his research shows the president’s got it wrong. (Meirav Arlosoroff, Haaretz+)
Make high-tech, not war: Israel and Palestinians forge cutting-edge coexistence
Far from the rockets, fiery kites and snipers, cooperation between Palestinian techies and Israeli entrepreneurs – as seen in the Rawabi Tech Hub in the West Bank – is booming. Will ventures with the Arab world be next? (Eliran Rubin, Haaretz+)
Haaretz Photo Blog: This 25-year-old Woman May Be the Best Street Photographer in Israel
Photographer Alex Farfuri, 25, reveals the beauty of a country in turmoil. (Daniel Tchetchik and Alex Farfuri, Haaretz)