by APN 07/04/18
Share
Information obtained by Peace Now indicates that the Binyamin Regional Council concealed tens of millions of shekels in funding for Amana, an organization that stands behind the establishment of most of the illegal outposts in the West Bank and is involved wide scale illegal construction in settlements. Many more millions were granted to political organizations, striving to affect public opinion and government bodies to support the settlements and to help the right-wing ideas.

Every local authority in Israel, including those in the West Bank, is allowed to allocate funds to non-government organizations for the benefit of its residence, in the framework of transparent criteria, and to limited list of causes regulated by the Israeli Ministry of Interior. The funding for all of the West Bank local authorities is coming from the Israeli government in addition to local taxation, collected by the localities from their residence.

Following a Peace Now petition under the Freedom of Information Act, the Binyamin Regional Council was forced to disclose detailed information about the funds it provides to non-governmental organizations. The information shows that between 2013 and 2015, the Council distributed over NIS 65 million to various organizations. 85% of the support funds (more than NIS 55 million) were transferred to political NGOs striving to affect public opinion and government bodies to support the settlements, and to Amana, which engages in illegal activity. Only 15% of the funds were transferred to other non-profit organizations that deal with welfare, education, sports, etc., in accordance with the regulations of the Ministry of Interior.

Amana is the organization that received the highest amount of council support, to the tune of NIS 37 million within three years, or about 57% of the total support funds that the Binyamin Council gave to all non-profit organizations. As noted, Amana (which is not a non-profit organization) is behind the establishment of most of the illegal outposts, and it is involved in illegal construction activity in settlements (see more about Amana and its illegal activity here).

In a request for support that Amana submitted to the Binyamin Council, it stated that in 2013 it received “an additional NIS 28,490,000 from other local authorities." In 2015 it reported 28,700,000 NIS received from public sources (apparently also from local councils). In total, according to these reports,  the amount Amana received from public funds through the regional councils in 2013-2015 came to at least NIS 94,190,000 of public money (it should be noted that Amana did not specify in the form for 2014 how much it received from other public sources).

Concealing the transfer to Amana - For years many people have tried to decipher where Amana's vast funding is coming from. How does a private organization (cooperative society), which officially receives no subsidies from the state, enjoy huge sums of tens or even hundreds of millions of shekels a year. This budget supports, among other things, the illegal activity of building infrastructural and housing in outposts and illegal neighborhoods in the settlements.

In the financial statements of the local authorities, there is a form with a list of the subsidies granted by these authorities to various organizations. In the annual reports of the Binyamin Regional Council in recent years, support for Amana has appeared (under the category of “participation in a settlement movement"), amounting to NIS 720,000 per year. However, the information revealed now shows that the real amount transferred by the Council to Amana is at least tens of millions of shekels per year.

The transfer of funds to Amana contrary to the subsidy procedures - to a private body and not according to accepted criteria
According to the subsidy procedures established in the Director General of the Ministry of the Interior instructions in 2006, local authorities, including settlement regional councils, are permitted to transfer subsidies only to public institutions and not to private entities. The regulations also stipulate that the subsidies must be transferred to institutions operating for the purposes of “education, culture, religion, science, art, welfare, sports health or a similar goal.”

Amana, which is a Cooperative Society and considered a private body, is not entitled to receive support from the Binyamin Regional Council or any other public authority. Recently, the State Comptroller published a report criticizing the Binyamin Regional Council. In his report, he touched upon this point in the context of other cooperative societies, and criticized the transfer of funds from the Council to them, in light of the fact that this contravenes the subsidy procedures established by the Ministry of the Interior.

The State Comptroller’s report also criticized the fact that the Council had determined criteria for subsidies that were not in accordance with the procedures. “Some of the criteria are contrary to the procedure that regulates the support of local authorities in public institutions.” In Amana's requests for support, the application was written under “settling movements.” In the State Comptroller's report, it referred to the criteria for "preserving land" and "redeeming land" in the context of associations such as Regavim, and stated that “these criteria are not related to areas such as education, culture, religion, science, art, welfare, health, sports, etc., and include activities over which the council's authority is doubtful.” In fact, the comptroller determined that “in its decision to grant subsidies on the basis of the above criteria, the Binyamin Regional Council deviated from the framework in which it is authorized to act in accordance with the law.”

The Yesha Council, the main political organization of the settlers, which is involved in public relations, organizing demonstrations and intensive political lobbying, received a total of NIS 7,404,325 from the Binyamin Regional Council between 2013-2015. According to its reports on the request for support, the Yesha Council received from other local authorities an additional sum of more than NIS 17 million of public funds.

Again, the State Comptroller recently published a report rebuking the Binyamin Regional Council, including criticism of the council’s increased funds transfers to the Yesha Council, saying that “the council serves as a conduit for transferring funds from the state to a private association.” The comptroller notes, for the sake of comparison, that the Binyamin Council is also a member of the Center of Regional Councils, a similar lobbying body that brings together all the regional councils, and the allocations the council gives to this body are only about NIS 180,000 a year.

The comptroller also commented on the conflict of interest of the head of the Binyamin Regional Council, Avi Roeh, who was then head of the Yesha Council, who made sure to transfer inflated grants to the association he heads.

Regavim - Regavim is an organization that works against Palestinian construction throughout the West Bank, and within Israel itself by filing petitions to courts and by public campaigns. In addition, it publishes reports, holds briefings, and runs a strong lobby in the Knesset and the Cabinet. Between the years 2013-2015 Regavim received NIS 1.5 million from the Binyamin Regional Council, and announced that it also receives an additional NIS 5,640,000 from other public sources.

It should be noted that in the same State Comptroller report on the Binyamin Council, the comptroller determined that also in the case of Regavim, there was a conflict of interest when the former assistant to the council head, Yehuda Eliyahu, also served as the director general of Regavim. In addition, the comptroller determined that the council had “tailored” criteria to suit certain organizations, including Regavim. The comptroller stressed that the goals of “land preservation” and “land redemption,” according to which the funds were transferred to Regavim, are not within the purview of the instructions of the Ministry of the Interior.

The Binyamin Settlers' Association – An association which engages in public campaigns and political education on the settlements, received a total of NIS 3,700,000 between 2013-2015.

Mishkefet - an association that brings thousands of visitors to tours in the settlements, and which educates them to support the settlement enterprise. It received a total of NIS 3,000,000 between 2013-2015.

Ve'agudato Al Eretz Yessadah - a relatively new non-profit that is engaged in public relations and advocacy toward “encouraging and strengthening settlement in Judea and Samaria,” through means of public campaigns, received between 2013 and 2015 a total of NIS 1,400,000.

The Association for the Advancement and Development of Tourism in the Binyamin Region - an association that organizes trips for groups and individuals in the Binyamin region, "aimed at improving the image and increasing awareness of the importance of this area for Jews". Received a total of NIS 1,500,000 between 2013-2015.

Only 15% of the council's support (NIS 9.8 million) goes to welfare organizations, education, health, and related fields, which are permitted by the instructions of the Ministry of Interior.

The legality of the use of public funds for political purposes - The High Court of Justice (HCJ) has weighed in on several occasions with regard to the transfer of public funds to political activity. The justices’ opinions on the legality of these transfers were divided. In a judgment in HCJ 10104/04, filed by Peace Now against local authorities in the Occupied Territories and the Yesha Council, concerning the council’s funding of a campaign against 2005 Disengagement, the court ruled that the use of public funds for political purposes was inappropriate, but the justices were in disagreement regarding specific political issues and the legitimacy of their funding by local authorities. The justices ruled that in cases where the political funding is legitimate, the Interior Ministry can deduct the funds transferred for political purposes from the budget transferred to the local authority from the state budget.

As Justice Beinisch wrote: “As for the practical measures to be taken against a local authority, when it used its budget to finance a public campaign against a political plan of the national government, I accept the mechanism of deduction.”

Peace Now calls for an end to the use of tens of millions of shekels of public funds for political purposes and illegal activity. “If so far it was known that the authorities were funding such activity but it was not clear to what extent, this data now reveals the depth of this robbing of public funds to finance political campaigns and illegal activity. It is time for the Interior Ministry to put an end to this abuse of Israelis’ taxpayer money and to demand that the authorities in the West Bank cease this illegal funding and give the money back.” 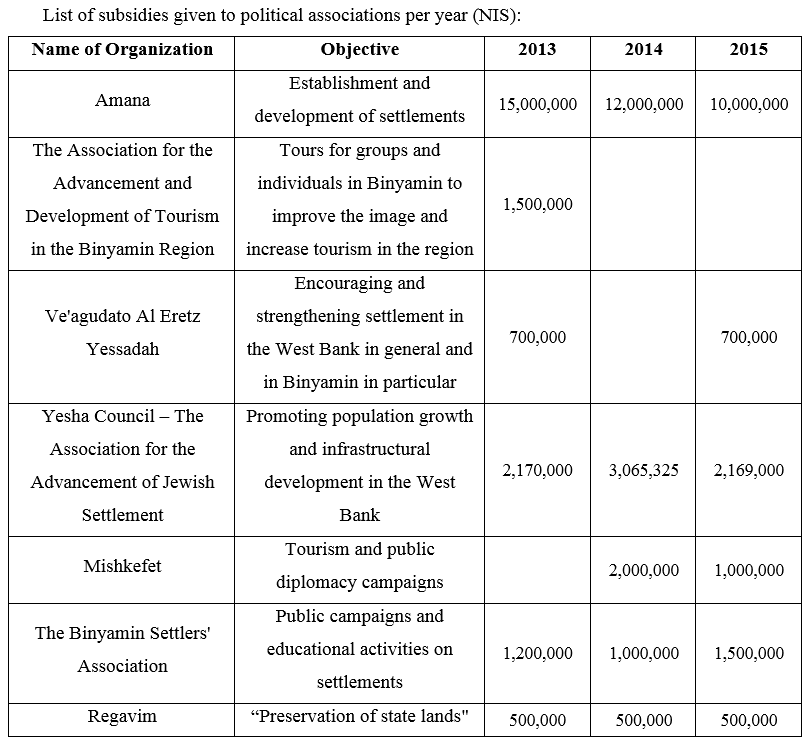