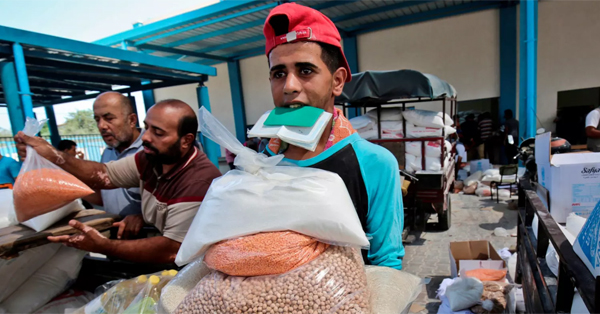 
You Must Be Kidding:
Israeli defense officials plan to go to a donor conference to convince the world to give money to UNRWA, the UN agency for Palestinian refugees, after the Trump Administration cut off all aid to the agency - with the support of Israeli Prime Minister Binyamin Netanyahu.*
Front Page:
Haaretz
Yedioth Ahronoth
Maariv This Week (Hebrew links only)
Israel Hayom

News Summary:
Israel lauded and the Palestinians blasted the decision by the Trump Administration to close the Palestinian diplomatic mission in Washington, an Israeli female gymnast won a silver medal at the world championships, three Palestinians were arrested on suspicion of setting on fire an Israeli nature reserve in the West Bank near the Dead Sea, and Israel spends considerably less than its Western counterparts on children’s education - making top stories in today’s Hebrew newspapers.

**Also, in the news over the past few days, the Palestinians also slammed the US cancellation of all financial aid to the UNRWA, the UN agency for Palestinian refugees. Facing a $200 million shortfall, UNRWA is now seeking funding from Europe and from Gulf States. Interestingly, in a meeting with Israeli government officials last week, Israeli defense officials said that Israel now must establish an alternative for UNRWA or Gaza will collapse and violence from Gaza towards Israel will escalate. That comes a week after Israeli Prime Minister Binyamin Netanyahu lauded the US decision to cut UNRWA funds. Ironically, an Israeli delegation will attend a donor conference in New York later this month to encourage donor countries to contribute to UNRWA in order to guarantee the continued delivery of food, education services and the salaries of the UN’s 30,000 employees in the Gaza Strip. Among the Israeli defense officials attending will be Maj. Gen. Kamil Abu Rukun, the coordinator of Israeli government activities in the Palestinian territories. On Saturday, the US also cut off the $25 million in aid to Palestinian hospitals in East Jerusalem. The Palestinian Authority accused the U.S. of trying to "liquidate the Palestinian cause."

Features:
In photos - Israeli settlers build houses in Jordan Valley
Israeli settlers started building and setting up housing structures in a settlement outpost in Khirbet al-Sweida village in Tubas in the northern Jordan Valley of the West Bank. Activist Aaref Daraghmeh said that Israel confiscated thousands of dunams of lands from its original Palestinian owners for Israeli settlement expansion in the area. (Maan)
Haaretz Poll: For Rosh Hashanah, a Picture of Israel’s Muddled Jewish Soul
Israelis and Americans lead the West in their belief in God, a factor that can help explain their unique relationship and shared animosity toward secularizing Europe. (Chemi Shalev, Haaretz+)
Israeli resident of Gaza border sculpts flowers out of rockets
After Yaron Bob's home sustained a direct hit by a Hamas missile, he decided to create symbols of peace out of remains of rockets as a way to overcome trauma; Shimon Peres, Hillary Clinton and Tony Blair are among those who became recipients of artist's unique creations. (Gil Korotki, Ynet)
A Jew, a Muslim and a Christian Walk Into a Bar... in Northern Israel's Nightlife, That's No Joke
Christian Arab villages in the Galilee have recently become hotbeds of nightlife – and the birthplace of a new culture of coexistence. (Roy Arad, Haaretz+)