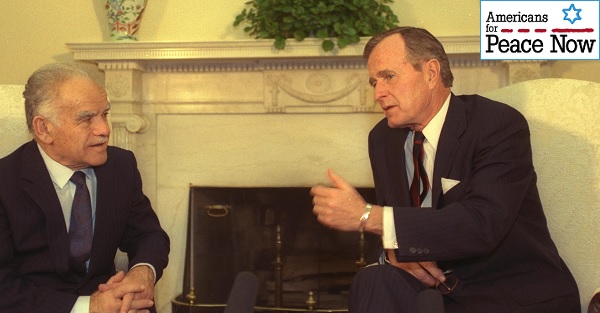 Washington, DC – Americans for Peace Now (APN) mourns the passing of President George H. W. Bush and salutes his legacy of efforts to advance peace between Israel and its neighbors.

A proponent of American global leadership and engaged diplomacy, President Bush demonstrated that the United States can build coalitions for peacemaking as well as for war.

As he did in convening the Madrid Conference in 1991, following the Gulf War, bringing together leaders of Israel and many representatives of Arab countries and the Palestinians, Bush also demonstrated that the White House can effectively apply pressure to both Israeli and Arab leaders to curb their intransigence and to push them to negotiate peace.

George Bush was a staunch supporter of Israel. He worked diligently to enhance Israel’s security and wellbeing both militarily and diplomatically, realizing that Israel can obtain real security only by combining defensive military power with proactive diplomacy to make peace with its neighbors.

APN joins our fellow Americans and our brothers and sisters in Israel in paying tribute to the 41st president of the United States.