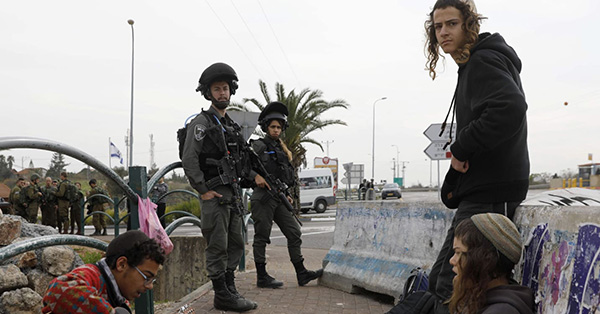 Quote of the day:
"The 'Zionist response' as a reaction to terror means that approving the (settlement) outposts is an act of revenge. It has nothing to do with security. There’s no war on terror here but a translation of murder into institutionalized terror against the law."
--Haaretz journalist Zvi Bar'el writes that the government turns Palestinian attacks in the West Bank into a real estate perk for lawbreaking extortionists, the settlers, who build on privately-owned Palestinian land.*
Front Page:
Haaretz
Yedioth Ahronoth
Maariv This Week (Hebrew links only)
Israel Hayom

News Summary:
Israel’s presentation at the UN today about Hezbollah tunnels, Israeli Prime Minister Binyamin Netanyahu’s declaration that attacks on Israelis in the West Bank will only “strengthen the settlement enterprise” and Rona Ramon’s final journey to the Peres Center for Peace and Innovation where she will lie in repose before cremation (to spare her children another funeral) - were the stop stories in today’s Hebrew newspapers.

Also making news, US Ambassador to the UN, Nikki Haley said Trump’s Mideast peace plan "will be different from all previous peace plans," but noted it was unclear “whether the response to it will be any different.” ‘Israel Hayom’ said it learned that the plan gives Israel unlimited security control over the Beqaa Jordan Valley and that it gives the Palestinians parts of Jerusalem. Haley also accused Arab countries of not making the Palestinian people a priority: “Because if they were, you would all be in a room helping bring both sides to the table.”

And, the Hebrew papers quoted from a Wall Street Journal article that reported that the Saudi-Israel back channel took a hit after the two Saudi officials in contact with the Israelis were dismissed over the murder of Saudi journalist Jamal Khashoggi.

Also of interest, Maariv reported that Israeli Agriculture Minister Uri Ariel stopped the Israeli import of Palestinian fruits and vegetables, which the security establishment said will not only harm Palestinian farmers, but also Israeli security. Ariel’s move was allegedly in response to the suspension of the importation of goats from Israel to the Palestinian Authority and the decision was made without consulting the security establishment or the Prime Minister. “This is a very difficult blow for the Palestinian farmers, since it is estimated that the loss of one million shekels a day, and between 280-300 tons of fruit and vegetables will be lost,” wrote Maariv. The security establishment vehemently opposes the decision, saying: “This is an irresponsible and populist decision that stems solely from political considerations at the expense of the security of the entire public, including the settlers." Israel’s Civil Administration in the West Bank said the Palestinian Authority was ready to come to the table and talk [about the issue of the goats - OH] and there was no need (for Minister Ariel) to escalate the situation.

The UN Security Council will discuss today the Hezbollah's cross-border tunnels and Israel is on the diplomatic offense. The IDF has released video from the tunnels, and says that Hezbollah operatives have tried to block some of the tunnels that were exposed. A Lebanese paper reported that Israel asked the US to pressure Lebanon to uncover additional tunnels, according to Western diplomatic sources. (Maariv) However, former Lebanese minister Tarek Mitri said, “The tunnels, which have been present for a long time, don’t constitute any evidence of violation of Resolution 1701.” According to the IDF, none of the tunnels that have been found, as well as others the military is trying to locate, poses a threat to the citizens of Israel, Ynet wrote.  The IDF has yet to release the location of the concrete-reinforced tunnel.

Features:
As smoke clears, capturing the Israeli-Palestinian conflict
Reuters photographer Mohammed Salem snapped the most dramatic moments that occurred along the Israeli-Gaza border over the past year, documenting the March of Return protests, Hamas's rocket salvoes, Israeli fields scorched by incendiary kites and balloons and buildings destroyed by IDF strikes. (Reuters, Ynet)
'Daughters of Jerusalem' sing out
A new album was released by "Banat Al Quds" (Daughters of Jerusalem), 25 young Palestinian women from families with deep roots in Jerusalem. They all study at the Edward Said National Conservatory of Music and live in East Jerusalem. Now they are releasing a CD where they also perform duets with the American Princeton Girls Choir and the Oslo based Norwegian Girls Choir. (Maan)