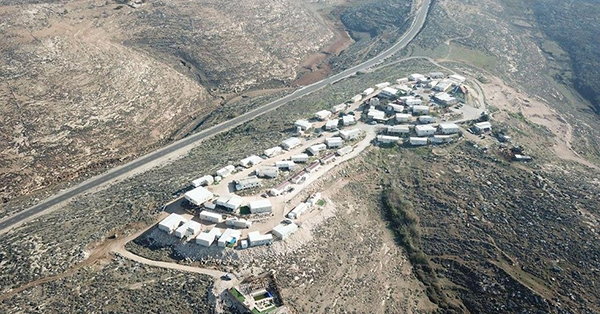 Number of the day:
482.
--The number of Jewish terror attacks - nationalistically motivated crimes - against Palestinians in 2018 - triple of what it was the year before.*
Front Page:
Haaretz
Yedioth Ahronoth
Maariv This Week (Hebrew links only)
Israel Hayom

Elections 2019 News:
Prime Minister Binyamin Netanyahu attacked the judicial system in a video clip, blamed his military secretary for the eviction of settlers from Amona outpost Friday (commentators say that was in order to keep settler support while the new and most sought-after politician Benny Gantz broke his silence and said Israel needs a different type of dialogue and leadership, it needs stateliness.

The opposition made fun of Netanyahu for his video clip in which he urged the Attorney General not to decide on whether to indict him before elections, saying it’s like severing an innocent man’s arm. Yedioth wrote that the clip signified that Netanyahu was “raising gears” against the judicial system. Netanyahu wasn’t the only one speaking against the judicial system. The State Prosecutor slammed coalition whip, MK David Amsalem, of making “dangerous,” “super problematic” and “precarious” statements for recently saying that "millions of people will not accept" an indictment against  Netanyahu for corruption charges. Attorney General Avichai Mendelblitt is expected to announce in February whether he will indict Netanyahu in any of the three corruption cases. According to a poll, most Israelis think the indictment decision should be announced before the April elections. Only 22% of respondents said Mendelblitt should wait until after elections. In any case, polls showed that an indictment won’t influence voters and Likud would still lead with 30 seats in the Knesset.

*Other Top News Summary:
Maariv ran on its front page that Israeli forces arrested Mohammed Barghouti, 17, whose two brothers were behind shooting attacks in the West Bank, and called them a ‘terrorist family,’ while Haaretz ran on its front page that two more Jewish youth were arrested in connection to a Jewish terror case that has a gag order on it. Moreover, some 300 people demonstrated and scuffled with police outside the Prime Minister’s residence Saturday night in protest against the alleged violation of the rights of the five Jewish detainees' who were prohibited from seeing a lawyer. The first three have since seen their lawyers. Haaretz+ reported that ‘Jewish terror’ incidents targeting Palestinians tripled in 2018 with 482 politically motivated crimes by Jews reported in the West Bank last year, including assault and property damage.

Also making headlines, US National Security Adviser John Bolton said Saturday that the US may stay in Syria and he warned the Assad regime against using chemical weapons once the US withdraws from Syria. Bolton arrives in Israel today to allay Israel’s concerns about the US withdrawal. Netanyahu also discussed US troop withdrawal with Russian President Vladimir Putin on Friday.

Also, a tiff between the Israeli and Palestinian embassies in Peru broke out after Peru named a square in its capital after Palestine, angering the Israeli ambassador. Last Monday, Peruvian officials inaugurated the square in the San Borja district during a ceremony hosted by Mayor Marco Antonio Alvarez Vargas. Israeli Ambassador to Peru, Asaf Ichilevich, slammed the move. “We hereby raise our objection to the presence of a square in our district, which will serve as a platform for future acts of support to the... Palestinian cause…n previous occasions, we have already witnessed that some ‘cultural’ events promoted by the Palestinians have been used to promote acts of terrorist organizations and glorify their members,” he wrote on Facebook. The Palestinian Embassy in Peru issued a response: “We would like to inform members of the public that there is a park called Ramat Gan Israel in San Borja, and the Palestinian community has never sought to spoil it. On the contrary, we respect the autonomy of Peruvian institutions and the diversity of communities and cultures that coexist peacefully in the country,” said the Palestinian Embassy in Peru in response, adding that it will lodge a formal protest against Ichilevich’s remarks with the Peruvian Foreign Ministry, and will ask the ministry to take appropriate measures. NOTE: Yedioth reported that the inauguration of the square was postponed following the Israeli ambassador’s letter and that the Peruvian Foreign Ministry will decide. However, the local media reported that it was inaugurated last Monday. (Yedioth, p. 19, IsraelNoticias.com, TelesurEnglish.net, HispanTV.com, and MSN)

Features:
The 20-something Israeli Trio That's Fighting Femicide
'Shocked to the depth of their souls,' three Tel Aviv roommates were the moving force behind last month's national strike against violence against women. (Mae Palty, Haaretz+)
Where are the abducted Yemenite children?
In the first years of the State of Israel, young Jewish migrants from Yemen had their children taken away and were told they had died. Seventy years on, no one really knows what happened to them and the grieving families who still live with the burden are demanding to know the truth. What happened to their children? (Etti Abramov, Yedioth/Ynet)

Elections 2019 Commentary/Analysis:
The end-of-the-Netanyahu-era election (Ravit Hecht, Haaretz+) This election is like a midterm — a transitional election aimed at the day after the Netanyahu era, which all the political players expect to end in the next year or two for legal reasons.
A crystal ball on 2019 (David M. Weinberg, Israel Hayom) A political-diplomatic forecast for the year ahead: Netanyahu wins but his era ends, war breaks out in north, Trump plan fizzles, Supreme Court overreaches, Jews abroad suffer, and Israel thrives.
A Panicked Netanyahu Is Bracing for the Inevitable (Yossi Verter, Haaretz+) Netanyahu sees the indictment on the wall but has a new plan, while Labor leader Avi Gabbay drives a final nail in his party's coffin.
Who's afraid of Benny Gantz? (Yuval Karni, Ynet/Yedioth) Netanyahu's associates are planning a political 'targeted killing' of the former IDF chief, releasing what they say is ruinous sensitive material in the hope of taking down what they see as the prime minister's greatest threat.
Netanyahu Sacrifices His Military Secretary to Appease Settlers Ahead of Election (Amos Harel, Haaretz+) There is something strange about an incident in which over 20 police officers were wounded and the only person to pay a price was the prime minister’s military secretary.
Time to change the equation (Dror Eydar, Israel Hayom)
It is time for religious Zionism to come into its own as a movement that includes many different worldviews rather than risk splitting the conservative-right vote among increasingly specific sectors, which could wind up putting the Left into power.
Netanyahu's putsch against the rule of law is inspired by Trump, Bolsonaro and other authoritarian allies (Chemi Shalev, Haaretz+) His efforts from Brazil to stop the attorney general from deciding his fate before the election was a misrepresentation wrapped in a lie inside a fraud.
A rare animal in today's wild political climate (Einav Schiff, Yedioth/Ynet) With the departure of MK Dov Khenin, the Knesset is losing one of its most diligent and accomplished members, unlike so many others who constantly seek media coverage and sensational headlines.
I have no doubt that extremists also love the country, but how much is it permissible to act with evil? (Prof. Rafi Carasso, Maariv) Elections are approaching, and evil is celebrating. It's really a war. And in war there is legitimacy to defame and unleash evil. Where is the border between curses and curses and the permissiveness of opponents?
Talk to Us, Benny Gantz (Friday Haaretz Editorial) As army chief Benny Gantz fought for raising the defense budget and against bombing Iran’s nuclear facilities. But the halo of having been chief of staff isn’t sufficient to win the election.
The end of the road (Dr. Haim Shine, Israel Hayom) I doubt Avi Gabbay ever voted for Labor before being appointed party leader in July 2017. One of the founders of the Kulanu party, Gabbay jumped ship when he saw an opportunity to take over Labor.
Bennett and Shaked’s dual test to draw support to 'Hayamin Hehadash' (Israel Harel, Haaretz+) In addition to the secular and traditional-Jewish pool of voters who seek a genuine, honest right-wing home is a second pool, also large, composed of the so-called 'knitted kippa' religious Zionists.
Hatred for hatred's sake (Yaron London, Yedioth/Ynet) Minister Uriel Ariel, Knesset Speaker Yuli Edelstein and MK Avigdor Lieberman could not contain their joy at news that Arab Mks Hanin Zoabi and Jamal Zahalka will likely not serve in the parliament following the elections. But what is the point of expressing these views so publicly if the targets of their abuse don't even see it?
Putsch bypass route: Netanyahu will build a coalition that will also function under indictment (Adv. Yoram Sheftel, Maariv) Bennett and Shaked's resignation from Habayit Hayehudi faction does not weaken the right-wing camp and may even strengthen it. And the law states: Even in the case of a scandalous indictment, there is no reason for the prime minister to resign.
The Decline and Fall of Putin's Favorite Israeli Politician (Evan Gottesman, Haaretz+) Avigdor Lieberman, the bellicose former coalition kingmaker, known for his fulsome praise for Putin, hoped his dramatic resignation as defense minister a month ago would reap him electoral dividends. But his brand of Russian-speaking special-interest politics is going out of style.
Gabi (Ashkenazi), it's time to get up and look after your own interests - the State of Israel (Avi Benayahu, Maariv) You did not speak in the squares, you did not walk through the streets. You got angry, you exploded, but you kept your stateliness. Avi Benayahu writes a long and reasoned personal letter to his former commander and friend about whether to enter politics.
Livni, Gabbay and the feminist filter (Anat Lev-Adler, Yedioth/Ynet) Although the Labor leader's treatment of his former political partner was inappropriate, anyone claiming that his behaviour is down to her being a 'helpless woman' is damaging the campaign for gender equality.
When I received the request from Bennett and Shaked, I understood that this was an offer that must not be refused (Caroline Glick, Maariv) The Maariv Weekend and JPost columnist writes in her last column: I could have continued calling for the restoration of the democratic systems in Israel from the pages of the newspaper, but I chose to join the mission from within the Knesset.

Interviews:
The Israeli political artist who dabbles both inside and outside the occupation
For some of his works, David Reeb goes out into the field, films Palestinian demonstrations and turns them into paintings. He tells Haaretz about the process. (Interviewed by Naama Riba in Haaretz+)

A former rodeo clown travels to Israel to learn Krav Maga straight from the source
This week at the Tel Aviv airport: An American who wants to learn an Israeli martial art in order to disarm assailants, and two Israelis who observed a Jewish community in Canada – including an attempted anti-Semitic attack. (Interviewed by Liat Elkayam in Haaretz+)