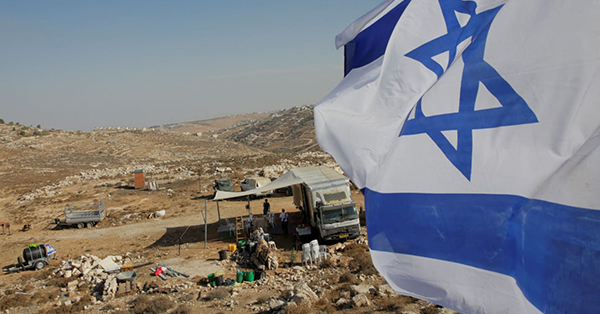 Quote of the day:
“The Netanyahu government is carrying out a dangerous and underhanded step in order to avoid public criticism in Israel and worldwide – it is no coincidence that this was done immediately after the announcement of the election, when public attention in Israel is directed at political developments and during the Christmas holiday, when the entire Christian world is on vacation."
--Peace Now's Settlement Watch team leader, Shabtay Bendet, said in reaction to the Israeli government's allocation of 300 acres of West Bank land for a new neighborhood that would expand Efrat settlement toward Bethlehem and surround the Palestinian city with settlements.*
Front Page:
Haaretz
Yedioth Ahronoth
Maariv This Week (Hebrew links only)
Israel Hayom

News Summary:
Israeli Prime Minister Binyamin Netanyahu’s ‘dramatic election show whine’ to the nation, which sent the country in jitters when it was announced hours in advance, the death at age 93 of Moshe Arens, a highly respected senior Likud figure, whom commentators, including Likud people, wished Netanyahu were more like, and the death of a paratrooper, according to some, due to his commanders’ negligence, after he slipped and drowned in a gushing river during a navigation exercise that was held in the midst of a storm, were today’s top stories in the Hebrew newspapers.

Netanyahu’s staff had said at about 5PM that there would be a “dramatic statement” at 8PM, which coincided with when the evening news programs begin in Israel, but the subject of the statement was kept secret. Four minutes after Netanyahu began his address, Channel 10 cut away from the live broadcast, after it realized that there was no dramatic news, only Netanyahu complaining that his demand for a confrontation with his former allies-turned-state-witnesses - “even on live TV” - had been denied. The full speech was 7.5 minutes. The police have recommended indicting Netanyahu in three corruption cases. Channel 10 lost viewers after it decided to stop broadcasting, Maariv reported. Channel 10 journalist Raviv Drucker and Maariv commentator Ben Caspit (see Caspit’s sharp Op-Ed translated in Commentary below) suggested that the heads of the news companies either demand to know what Netanyahu wants to talk about and then decide whether to broadcast it live or pre-record it and broadcast it as it sees appropriate. (Maariv)

The Justice Ministry, the Police, and left-wing and centrist politicians criticized Netanyahu for the speech. The Justice Ministry said the investigations were "conducted professionally and thoroughly" and senior officials in the judicial system rejected Netanyahu’s claim that he was the victim of biased treatment. “There is no legal obligation to hold a confrontation between him and key witnesses. Netanyahu chooses to create a public hearing for himself, instead of the hearing he will have to face in case he is indicted,” they said. Meretz Chairwoman, MK Tamar Zandberg, called the speech “election propaganda that is not fit to be aired on television." Associates of the new political candidate, Benny Gantz, said, “The time has come for a leadership that cares for citizens, not just for itself.” And Labor party leader Avi Gabbay said: "In a normal country, the prime minister does not attack the law enforcement authorities." But Netanyahu supporter, Culture Minister Miri Regev, said: "Justice is not available in the prime minister's investigation.” (Maariv) TV reporter and commentator on legal affairs, Guy Peleg said that "Netanyahu thinks this is a reality show, but he forgot that he is the suspect.” And veteran TV political commentator Amnon Abramovich, said: "I do not remember such a cynical show" and added that it was meant for Netanyahu’s political base. (Maariv) In his speech, Netanyahu derided the most serious suspicion against him: bribery - that he received favorable media coverage and lavish gifts in exchange for favors. “What was the bribery? Did money change hands? Was money deposited in bank accounts?” Later, he started a game on Instagram where followers were asked to suggest how to finish the sentence: "A bribe without money is like…” One suggested an omelette without an egg, another suggested a reality show host without her co-host.  (Maariv)

Also in the news, Iron Dome intercepted a rocket launched from Gaza early Monday, after which IDF jets attacked several targets at a Hamas military base. No injuries were reported on either side. Later, it was reported that Netanyahu ordered to freeze the Qatari cash transfer meant to go to Hamas this week to pay civilian wages in Gaza this month.

And, the families of the five Jewish boys arrested on suspicion of terror for the murder of a Palestinian woman got special treatment. The suspects' parents met with Justice Minister Ayelet Shaked, to whom they reiterated their accusations against the interrogation methods used against the minors. Also, it was revealed that Shaked called the mother of one of the minors and told her that she had spoken to the State Attorney on the subject. The youth, all yeshiva students in a West Bank settlement, suspected of throwing rocks at a Palestinian car that hit Aisha Rabi in the head and killed her. Meretz chairwoman MK Tamar Zandberg slammed Shaked for meeting with the suspects’ families, saying that the justice minister’s New Right party has “different standards for Jews and Arabs.” “Instead of doing soul searching, (Shaked) is making an electoral calculation and running into the arms of families accused of terror,” Zandberg said. The suspects’ parents also reiterated their accusations later at a press conference they gave, continuing to accuse the Shin Bet of employing illegal methods against the youth. One of the parents in the murder of Aisha al-Rabi said: "They tied up my son and spit on him.” Others said, "The boys will need psychological treatment following the trauma." (Maariv) Oddly, no journalist asked the parents if they think that tying up and spitting on suspects in terror cases is okay when the suspect is Palestinian. However, the Hebrew newspapers have published such questions raised by commentators, such as Haaretz’s Mordechai Kremnitzer and Maariv’s Tal Lev-Ram. At a swearing-in ceremony for judges, President Reuven Rivlin warned, "The Shin Bet is on the front lines these days…We must refrain from irresponsible attacks on people whose job it is to protect and defend the security of Israel against threats from home and abroad.”

Features:
Flotillas and fights: Israel's most controversial MK leaves behind a contentious legacy
Hanin Zoabi was the first Arab woman to become an MK for an Arab party, and the Joint List lawmaker spent her decade in parliament stirring up controversy, joining the Gaza flotilla, calling IDF soldiers murderers, praising terrorists who carried out deadly attacks on Israelis. (Moran Azoulay, Yedioth/Ynet)

Commentary/Analysis:
Does Iran really want to destroy Israel? (Zvi Bar'el, Haaretz+) Turns out, Iranians are split over this question, but the debate doesn’t make it to Israel – nor does the fact that the Iranians have other interests unrelated to the Holy Land.
Outcry Over Treatment of Jewish Terror Suspects Aims to Thwart Shin Bet Investigation (Amos Harel, Haaretz+) The allegations of torture are being exaggerated as part of a well-planned effort led by the lawyers of the suspects in the murder of Aisha Mohammed Rabi.
Two Israeli Literary Giants, Haim Gouri and Amos Oz, Under This Blazing Light (Yechiam Weitz, Haaretz+) There were major differences between Haim Gouri of the ‘Palmach generation’ and Amoz Oz, who rebelled against it, yet with their deaths, we have lost two of the greatest lovers of Israel, and also two of its greatest critics.
The Abbas-Hamas Tension Is Seeping Into the Gaza Front, at an Uncomfortable Time for Netanyahu (Amos Harel, Haaretz+) The Palestinian Authority has stepped up its threats to further reduce its aid that helps Hamas pay for water and electricity in Gaza, while Israel is blocking funds from Qatar.
Unnecessary death: the difficult questions that must be asked in the investigation into the death of Sergeant Eviatar Yosefi (Tal Lev-Ram, Maariv) Training takes place in the IDF even in stormy weather, but the commanders must exercise their discretion, follow the procedures and identify the weak points in the navigation axis even before training.
Responsibility falls on the generals (Yoav Limor, Israel Hayom) The unnecessary death of Sgt. Evyatar Yosefi is the type of tragedy that makes you pull your hair out in anger. The writing wasn't just on the wall, it was everywhere.
How U.S. Jewish anti-occupation group IfNotNow suppresses free speech on Israel (Carra Glatt, Haaretz+) IfNotNow's campaign against Birthright reveals a deeply reductive, illiberal streak: Palestinian narratives are uncritically endorsed - but Jewish Israeli views are apologetics and 'propaganda.’
Losing faith in the PLO (Prof. Eyal Zisser, Israel Hayom) The PA and Hamas have left the Palestinian street indifferent. Many Palestinians no longer believe either is capable of managing their affairs, let alone leading them to realize their goals.
How Israel Usurps Palestinian Land in Calculated Stages (Amira Hass, Haaretz+) The Israelization of 137,000 dunams (nearly 34,000 acres) of Palestinian land deepens every time its legal owners, their children and grandchildren are denied entry.
Palestinians should push the Muslim world to compensate Jewish refugees (Jonathan S. Tobin, Haaretz+) Israel is demanding reparations for the assets lost when 856,000 Jews were forced from their homes after 1948 - claims that are no less just than those of the Palestinians. It's time for both sides to see past their own exclusive victimhood.
National asset (Zalman Shoval, Maariv) Moshe Arens was very nationally-oriented, but not a nationalist and he did not see any contradiction between nationalism and liberal democracy. I wish his memory would give inspiration to political life in the State of Israel in the coming years.
Farewell to Moshe Arens, an analytical mind and one-state ideologue (Aluf Benn, Haaretz+) Moshe Arens’ voice was unique, insistent and unsuited to the talking points of Likud and Netanyahu.
https://www.haaretz.com/israel-news/.premium-farewell-to-moshe-arens-an-analytical-mind-and-one-state-ideologue-1.6822429

1925-2019: The Irony of Moshe Arens, the Unfailingly Courteous Gentleman Who Brought Us Netanyahu (Anshel Pfeffer, Haaretz+) The US-educated former defense minister lost his American accent, but one Israeli characteristic he never quite mastered was pushiness.
https://www.haaretz.com/israel-news/.premium-the-irony-of-moshe-arens-the-unfailingly-courteous-gentleman-who-brought-us-bibi-1.6812287

Public servant of a different kind: The mark left by Moshe Arens goes beyond the limits of politics (Arik Bender, Maariv) A farewell to a diplomat and a gentleman, one of the last people who saw Jabotinsky alive, who brought Netanyahu into our lives, and who left behind him a tremendous contribution to fortifying Israel's security and democratic life here.
https://www.maariv.co.il/news/politics/Article-679195