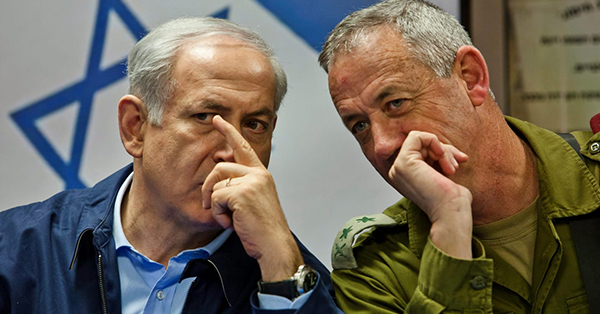 Quote of the day:
"Why is the alarm sounded when Jews are interrogated by dark police methods, but no one says a word when Arabs are interrogated with the same methods? Is a stone thrown by a Jewish murderer more sacred than one thrown by an Arab murderer?"
--Haaretz+ journalist Zvi Bar'el slams the criticism of the Shin Bet interrogations of the five Jewish terror suspects, saying a moral country cannot abide a double standard.*

Elections 2019 News:
Today’s big story in the Hebrew press was that Shin Bet chief warned that a foreign country will try to meddle via cybertechnology in Israel’s upcoming elections, but it's unclear in whose favor. Nadav Argaman said the move could influence the outcome of the elections, but that Israel has the capability of thwarting such efforts. According to a study by Israeli cybersecurity company Check Point, the biggest threat comes from people trying to manipulate opinions by distributing misleading information online; for example, by using fake Facebook profiles.

Meanwhile, former army chief of staff Benny Gantz is closing the gap with Prime Minister Binyamin Netanyahu in the newest Israeli election poll, in which 41% of respondents chose Netanyahu and 38% chose Gantz as their next leader,

Leading Israeli Arab lawmaker MK Ahmed Tibi is taking his party and breaking off from the Joint List faction, the latter which unites all the Arab parties in Knesset. Joint List Chairman Ayman Odeh, who also heads the Hadash party, said that Tibi’s decision harmed the Arab Israeli minority. "Why do you want to split now? It helps Netanyahu and the right-wing,“ said Odeh, adding that the Arab Israelis feel like a persecuted minority. (Maariv) Some of Odeh’s views about the government's actions towards the Arab minority were also held by MK Benny Begin, which may be why Netanyahu won’t secure a seat on the Likud list for Begin this year, as he has in the previous elections, according to Maariv. As a result, Begin may resign from political life. Maariv noted that last October, Begin spoke at a conference at the University of Haifa's Faculty of Law, saying that "the Jewish Nation-State Law does not actually infringe the equality of rights in the State of Israel, but it degrades the principle of equality and the state of the Jews." He proposed amending the law to include “and to uphold equality of rights for all its citizens.” Begin also expressed concern that the the tense security situation could lead to an attempt to pass laws that would harm minority groups in Israeli society.

And retired and controversial Israeli general Gal Hirsch has launched a political party to run in upcoming election. Hirsch said Israel needs to be tough on defense matters but compassionate on social issues and he named his party, ‘Magen Yisrael’ (Shield of Israel). Haaretz reported that Israel’s electioneering law Is 60 years old and has no reference to social media networks, which thus allows for early online campaigning.

Other News Summary:
The other big story was that Israeli security services detained Assam Barghouti, who was allegedly involved in the murders of two Israeli soldiers in a December drive-by shooting near a West Bank settlement outpost and the IDF released footage of the arrest. After the arrest and after being criticized for days for not giving the Shin Bet verbal support in the wake of de-legitimizing criticism by the parents of Jewish terror suspects, Netanyahu issued a statement of support for the Shin Bet. "For this operation, I praise the Yamam (Israel Police special forces), the IDF and, first and foremost, the Shin Bet, which is the best counter-terrorism organization of its kind in the world. We owe it a great deal, it performs professionally and morally. There is no room to attack it." (Also Maariv)

Meanwhile, IDF Chief of Staff Gadi Eisenkot visited the residents of the south of Israel where he not only revealed that Israel has thwarted the smuggling of some 20,000 rockets into Gaza, but also took a jab at MK Avigdor Lieberman, when he said that Hamas sees victory in political moves in Israel as a result of terrorism. (Maariv) Lieberman resigned as defense minister when Israel chose to take a more diplomatic path with the Hamas leadership in Gaza. Eisenkot also told the local mayors about the possibility of quiet in the sector: "I hope for a prolonged ceasefire until the end of 2019,” he said.

Commentary/Analysis:
*This Is Not How One Questions Jews (Zvi Bar'el, Haaretz+) Why is the alarm sounded when Jews are interrogated by dark police methods, but no one says a word when Arabs are interrogated with the same methods?
As a faculty member, I no longer have faith in the management of the Hebrew University (David Enoch, Mekomit Hebrew and translated by Yoni Molad) The apology ad issued by the university following the publication of lies about a lecturer who allegedly reprimanded a soldier in uniform is crossing a red line. One can not ignore the ugly abandon of a colleague in the face of a dangerous campaign of incitement.
Hebrew University’s Apology Enables Persecution of the Left (Or Kashti, Haaretz+) After university fails to back lecturer falsely accused of taking a student to task for coming to class in an army uniform, faculty members are asking themselves what they can say in class.
Stories of uniforms (Kalman Libeskind, Maariv) When the Hebrew University chooses not to sound a clear voice, every story - like the one about the lecturer and the student in the IDF uniform - is accepted as reasonable. Even 100 ads in newspapers won’t be able to change the impression that daily life creates.
If You Wish to Be an Informant (Haaretz Editorial) On the website of far-right organization Im Tirtzu, there’s a special section for informers. The recent goings-on at the Hebrew University shows how the organization’s efforts are bearing fruit.
Abbas can cause Gaza to explode before the elections (Shimrit Meir, Yedioth/Ynet)  Feud between Fatah and Hamas has escalated recently, to the dismay of Netanyahu who tried to buy quiet; if Abbas further cuts funds to Gaza we may not make it to elections without a military campaign.
What's Behind the Snub Erdogan Gave Bolton, and Why Some in Israel Are Still Optimistic (Anshel Pfeffer, Haaretz+) Nothing has changed in long term Turkish policy, Erdogan’s political interests and regional ambitions. The change is in American policy.
With U.S. Exit From Syria Unraveling, Erdogan Faces Serious Dilemma (Zvi Bar'el, Haaretz+) After Bolton remarks, Erdogan must decide between attacking Kurds and risking face-off with U.S. troops, or waiting for their departure. Erdogan cast aside as Putin helps Assad reintegrate into Arab world.
Palestinian narratives are always right. Israeli Jewish views are just propaganda (Carra Glatt, Haaretz+) That's the clear message from the anti-occupation activists of IfNotNow. Forget a more ‘balanced’ approach to the conflict: When they label views sympathetic to Israel as deceptive or malevolent – they’re trying to shut them down.
As an American-Israeli, I Am Thrilled for the Palestinians and for Rashida Tlaib (Bradley Burston, Haaretz+) Every day that Netanyahu chooses Trump and fundamentalism over the pro-democracy, pro-equality, pro-pluralism views of diaspora Jews, is a great day for the Palestinian cause.
Eritreans in Israel may finally be recognized as refugees (Oded Feller, Haaretz+) Eritrean citizens in Israel are in limbo. On the one hand, it is forbidden to deport them, but on the other they aren’t given anything.
Israel will have to choose between America and China (David Rosenberg, Haaretz+) America's emerging pressure on Israel to cool its love affair with China may not have such terrible consequences.
Arens had a nobility that forced others to improve their behavior and even their criticism (Meir Uziel, Maariv) His last years were devoted to research on the important role of the Beitar organization, a Jewish military organization, in the Warsaw Ghetto Uprising, as if in an effort to correct a terrible injustice of deliberate oblivion.
Moshe Arens actually realized and lived the Beitar glory that Jabotinsky dreamed of (Gideon Sa’ar, Maariv) He was a model and example for those who disagreed with him ideologically: courteous, stately, reasoned and not fervent, respectful towards his leaders, but also towards his opponents.
"Not one of us": In the defense establishment, Arens was treated with scorn, unjustly (Yossi Melman, Maariv) The IDF treated him with typical arrogance they point toward anyone who was not a former military man. But this did not prevent him from fighting the generals of the General Staff and forcing them to establish the headquarters of the ground forces.
Moshe Arens saw no contradiction between nationalism and liberal democracy (Zalman Shoval, Maariv) His approach to the Land of Israel was in the spirit of his mentor, Ze'ev Jabotinsky, and not in the messianic and extreme manner of some of the figures active in the political arena today, including in the Likud party.
A noble spirit, a truthful man (Prime Minister Benjamin Netanyahu, Israel Hayom) "Misha" Arens waged an unflagging diplomatic battle for Israel's vital interests as well as playing a vital role in strengthening Israel's air, land, and sea military might.
Netanyahu Can't Convey a Sense of Decorum He Never Had (Sami Peretz, Haaretz+) The prime minister dictates ostensibly clean messages and his associates translate them into dirty messages, contradicting the spirit of his mentor, the late Moshe Arens.
Netanyahu tries to sell his innocence with Instagram meme blitz (Ido Baum, Haaretz+) The PM’s cynical prime-time announcement was the opening shot of a scripted Instagram campaign designed to convince the public that he didn’t take bribes.
Why Wasn't Netanyahu Allowed to Confront the State Witnesses in His Corruption Probe? (Gidi Weitz, Haaretz+) It seems to have been no coincidence that the prime minister chose to make the demand for a confrontation only after the investigation was over.
A fascinating, if unimportant election (Avi Shilon, Haaretz+) It's become official in this campaign: There is no left-wing alternative running against the right-wing bloc, rather only more moderate variations of Likud’s positions