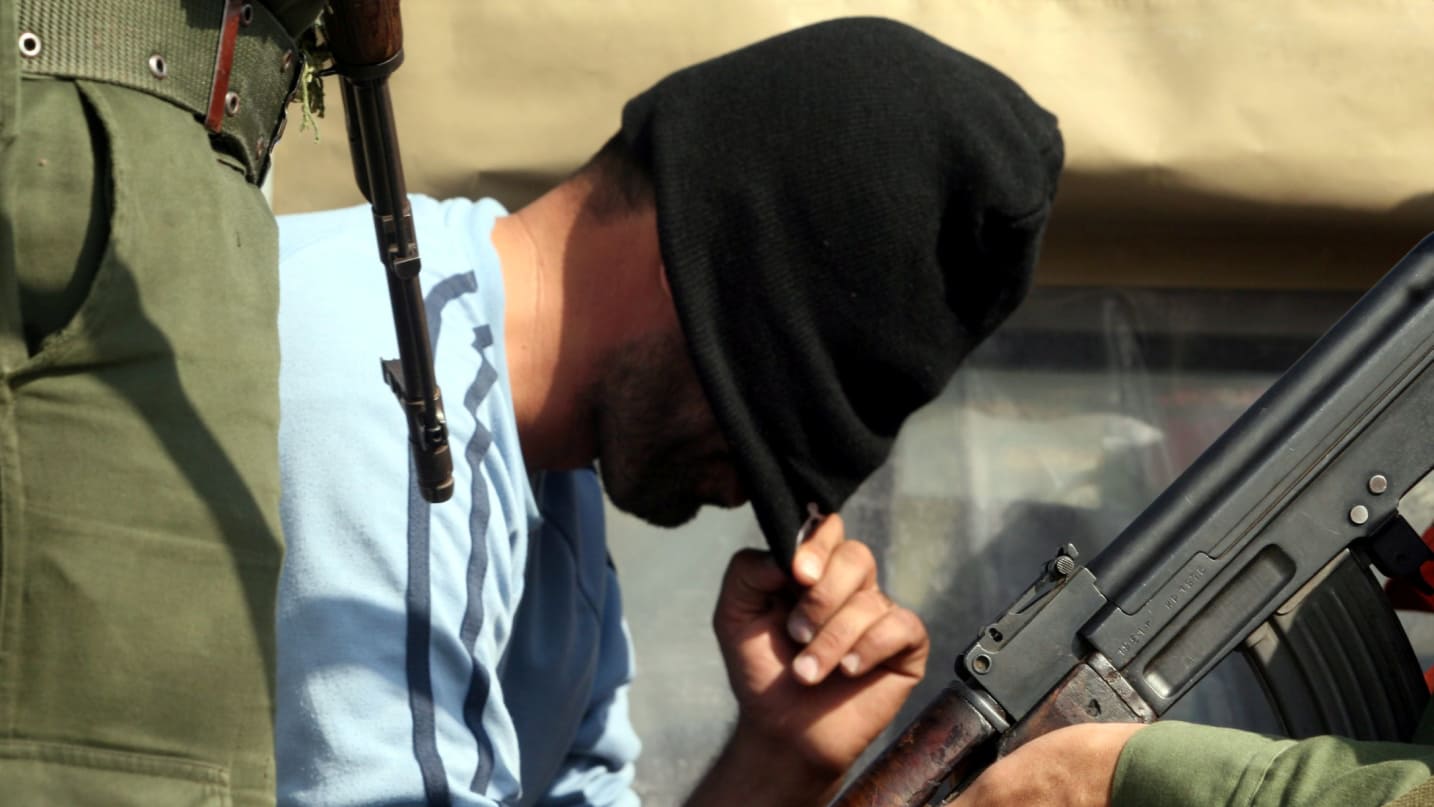 You Must Be Kidding:
“(The highway) is an example of the ability to create a shared life between Israelis and Palestinians while addressing security concerns.”
—Speaking at the opening ceremony of the ‘apartheid road,’ a new West Bank road that separates between Palestinians and Israelis, Minister of Public Security Gilad Erdan forgets what the word ‘shared’ means.**

Breaking News:
IDF officer and 4 Soldiers Arrested for Allegedly Beating Detained Palestinians
The five suspects beat the two detainees so severely that they needed medical treatment and were not interrogated. The soldiers were from the army's ultra-Orthodox Netzah Yehuda Battalion, two of whose soldiers were killed in a Palestinian attack the week before the December incident. This is not the first time the battalion has been involved in violent incidents. (Maariv, JPost, Israel Hayom and Haaretz+ and Ynet)
Front Page:
Haaretz
Yedioth Ahronoth
Maariv This Week (Hebrew links only)
Israel Hayom

Elections 2019 News:
A spring poll by the Pew Research Center, released the day after the head of Israel’s Shin Bet warned about attempts by a “foreign power” to intervene in Israel’s April elections, revealed that the majority of Israelis fear the elections will be manipulated through cyber attacks and Yedioth shared with readers how fake news, the exposing of sensitive information about the candidates and even hackers can affect the outcome of the April elections. Interestingly, only Israeli Prime Minister Binyamin Netanyahu’s Likud party opposes prohibiting anonymous online election propaganda, and the Kremlin made an emphatic announcement that Russia did not, does not and will not intervene in any elections in the world.

Also, former chief of staff Gabi Ashkenazi is being sought after by both Yesh Atid Chairman MK Yair Lapid, who offered Ashkenazi a senior portfolio after the elections and decisive influence in decision making, (Maariv) and by former chief of staff Benny Gantz, who is reportedly waiting to draft Ashkenazi before delivering his first public address since entering politics two weeks ago. New Right party leader Naftali Bennett said he hopes to take half of Gantz’s supporters, because he believes that for the first time in years voters might switch from Left to Right and Michal Zernowitski, 37, is hoping to become the first ultra-Orthodox MK for the Labor Party in April, standing on a platform of equality, social justice and peace. There are hundreds of thousands of Haredi voters just like her, she said, according to a profile of her in Haaretz+).

Other Top News Summary:
In other news, police stormed the yeshiva high school in the Rechelim West Bank settlement and summoned all the students for questioning in the October murder of Palestinian woman, Aisha Rabi, who was killed when a rock thrown at the vehicle in which she sat hit her in the head. Haaretz+ reported that they were summoned in the guise of interrogations, for which they were obliged to appear, but actually it was questioning and not an interrogation and they did not have to go. Four of the five yeshiva students at Rechelim were released to house arrest today.

In a sharp look at how the Hebrew media portrays the news:
In its headline Haaretz English wrote that a girl was stabbed yesterday in ‘E. Jerusalem.’ The Hebrew article simply said 'Jerusalem.' The addition of the word ‘East’ suggests that it was in an Arab part of E. Jerusalem and that the attacker was Arab. However, the attack took place in a Jewish neighborhood over the Green Line, which the Hebrew newspapers never refer to as E. Jerusalem. Unlike the English article, the Hebrew article reported that “At this stage, the girl can not give the interrogators any identifying details about the suspect-not about his appearance, about his clothes or about his origins…the stabber did not say anything during the incident, and it is difficult to say whether this was a criminal or nationalist event.”

Yedioth declared that Israel's Education Ministry “reinvented the Mideast” because it did not include the West Bank and the Golan Heights as part of Israel in an official form for first-graders. (The form also had some serious spelling mistakes.)

Features:
WATCH: Jailed without charge or trial: Administrative detention explained
Israel uses administrative detention to put Palestinians in prison without ever charging them with a crime. Sometimes the accusations are about a crime you haven’t yet committed. Almost always, the evidence is secret. (+972magVIDEO)

Elections 2019 Commentary/Analysis:
Trump and Netanyahu Agree: Desperate Times Call for Desperate Speeches (Chemi Shalev, Haaretz+) Both leaders are riling up their political base in order to relieve the tightening of the legal noose around their necks.
The sense of disgust with most candidates stems from the knowledge that they are selling false principles (Lilach Sigan, Maariv) So many parties, and yet a feeling that there is no one to vote for. The highest value is ostensibly the “political camp," and for that it is permissible to protect every weed from the margins [reference to Jewish youth detained on suspicion of terror - OH].
Bibiphobia: How We've Made a Monster of Netanyahu (Gideon Levy, Haaretz+) All the lack of public action, the indifference, complacency, blindness and years of silence in the face of conduct far more criminal find an outlet in hating Netanyahu.
Likud strategy is to make elections a referendum on Netanyahu (Mati Tuchfeld, Israel Hayom) As chief strategist of the Likud party's election campaign, PM Benjamin Netanyahu wants the indictment against him to be a nonstory, and for the voting public to believe that articles on a news site favorable to him do not constitute bribery.
Is Russia trying to meddle in Israeli elections? (Ron Ben Yishai, Ynet) The head of Israel's domestic security agency says a cyber attack or an 'influence attack' on social media aims to undermine Israelis' trust in their government, and while it is easy to point the finger at Moscow, Iran and China could also benefit from such a move.
Don't Give Up on This Election (Rami Livni, Haaretz+) The next step for those who yearn for a political upset should be forming a broad front dedicated to replacing Benjamin Netanyahu.
It's time for a new leaf in Arab-Jewish relations (Ben-Dror Yemini, Yedioth/Ynet) In Israel, Jews are said to hate Arabs and Arabs are said to hate Jews; fueled by politicians from both sides, hatred is taking over the country; but with the worst inciters among the Arab MKs leaving, we have an historic opportunity for unity.

Other Commentary/Analysis:
What do you call a rabbi who protects and defends Jewish terrorists? (Eric H. Yoffie, Haaretz+) Leading Israeli rabbi Haim Druckman called on national TV to 'release the children' suspected of stoning to death Palestinian mother-of-seven Aisha Rabi - because they're 'not terrorists.' His behavior is an inexcusable perversion of Jewish values.
Were the Shin Bet's interrogation techniques justified? (Yifat Erlich, Yedioth/Ynet) Suspects who have nothing to hide don't keep silent during interrogations, on the contrary—they talk; we should oppose aggressive interrogation methods, but, at the same time, demand the cooperation of the suspects.
The arrest of the youth from Rechelim (settlement yeshiva) reminds us: We must choose between the settlements and the state (Ran Edelist, Maariv) When will we understand that Rehelim and Amona and "educational institutions" like "Pri Ha'aretz" feed on the same root of all evil: the theft of land and the expulsion of Palestinians for the benefit of the settlement enterprise?
The Rashida Tlaib 'anti-Semitism' Slur Reveals the Loud, Illiberal Face of the anti-BDS Movement (Joshua Shanes, Haaretz+) For Liberal Zionists, the vitriolic explosion against the Palestinian-American congresswoman should be familiar. The anti-BDS movement calls us - and anyone who opposes Israeli policies - 'anti-Semites' too, and it's only getting worse.
The time has come for civil marriage in Israel (Haaretz Editorial) Growing number of Israeli couples who avoid the rabbinical establishment need an alternative that would guarantee their basic rights.
A window of opportunity (Uri Heitner, Israel Hayom) U.S. President Trump, untethered by Washington establishment dogmas, is open to innovative diplomatic initiatives. American recognition of Israeli sovereignty on the Golan is now more than a pipe dream.
Following Natalie Portman PR Disaster, Genesis Prize Goes to Loyal Friend of Netanyahu – and Trump (Allison Kaplan Sommer, Haaretz+) The decision to award the honor to New England Patriots owner and philanthropist Robert Kraft highlights how the foundation was desperate to avoid another scandal.
Erdogan Rejoiced at Trump's Syria Pullout. Then He Realized It Was Trump (Zvi Bar'el, Haaretz+) After Bolton remarks, Erdogan must decide between attacking Kurds and risking face-off with U.S. troops, or waiting for their departure. Erdogan cast aside as Putin helps Assad reintegrate into Arab world.

Interviews:
I Failed to Defend Israeli Democracy: Dov Khenin, Outgoing Communist Lawmaker, Admits Regrets
Dov Khenin, who started the year by quitting the Knesset, tells Haaretz how he’d be a greater agent of change outside parliament. (Interviewed by Jonathan Lis in Haaretz+)

(Attorney General Avichai) Mendelblitt: "At the end of his life, my father saw that things in the country were changing, not all for the better"

On January 28, the attorney general will participate in a special evening in memory of Beitar veterans, including his late father Baruch (Miki). Mendelblit opened his heart in a special interview. (Interviewed by Eyal Levy in Maariv)
Eyal Levy: Was your father pleased with the way the state is progressing?
Avichai Mendelblit: "At the end of his life, much, much less. He was not naive, he was very aware, and he saw that things were changing, and not all for the better."