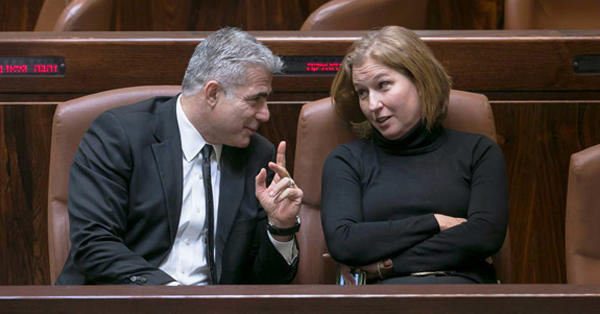 Quote of the day:
"As per the ancient words, "Thou shall not murder,' for G-d's sake! What is the point of living in a Jewish state, and going through so many trials and tribulations to protect it, if the officials of this country do not see fit to condemn such an abysmal act? How are we different from other nations, if the murder of an innocent woman does not shake us, just because the murderer comes from among us (allegedly), and the murdered person is the daughter of another nation?"
--Maariv commentator Shai Lahav slams right-wingers who either support the Jewish terror suspects in the murder of a Palestinian woman or who stay silent about the murder and the attacks on the Shin Bet, which detained and interrogated the suspects.*

Elections 2019 News:
Election news took a back seat in today’s Hebrew newspapers. Only Haaretz led the paper with an elections-related report: that Yesh Atid Chairman Yair Lapid was working on joining forces with Tzipi Livni, Hatnua Chairwoman, in order to court center-left-wing voters, after failing to get support from center-right. Meanwhile, Maariv reported that at an event attended by heads of AIPAC, Livni declared, “We can begin an immediate dialogue with the Palestinians even before the (Trump) peace plan is presented.” Livni told the crowd that Ramallah was interested in holding talks with Israel, but that "the government ignores them and pays Hamas.”

Haaretz+’s Judy Maltz writes that due to the formation of "Hayamin Hadash" (New Right) party, two of Israel's three religious parties may not pass the threshold to make it into the next Knesset, which may be why Justice Minister and co-chairperson of “Hayamin Hahadash,” Ayelet Shaked, was offered to lead Habayit Hayehudi faction, which she just left. She refused the offer, Yedioth reported. And far-right-wing MKs Bezalel Smotrich and former Agriculture Minister Uri Ariel are running against each other to lead the Ichud Haleumi (National Union) party.

Ynet reported that Dema Taya, 25, a Muslim Arab woman from northern Israel intends to run in primaries for Israeli Prime Minister Binyamin Netanyahu's right-wing Likud party. As a result, Taya’s extended family from Qalansawe town, in central Israel, released a statement that they are distancing themselves from her. “We are all familiar with the Likud and its leader who, during his tenure, 15 homes were demolished in Qalansawe. Dema was silent in response to that,” one family member told Ynet. Taya recently participated in an Israel advocacy campaign in the US.

Meanwhile, the pro-Netanyahu ‘Israel Hayom’ newspaper was the only one to publish a report according to which a court ruling could affect the corruption case against Netanyahu. And Haaretz+ reported that months before the Shin Bet chief warning, Israel’s cyber chief Yigal Unna warned of cyber assaults on state facilities.

Other News Summary:
Today’s top story was the farewell party for outgoing IDF Chief of Staff Gadi Eisenkot attended by all the who’s who in Israel’s political and military echelons and also in the news was the double murder in Jerusalem of an older couple at their home.

Today, Eisenkot takes off his uniform and is replaced by Lt. Gen. Aviv Kochavi. Netanyahu confirmed that it was Israel who attacked in Damascus over the weekend and that it has hit hundreds of Iranian and Hezbollah targets. Netanyahu's confirmation comes just after Eisenkot revealed in weekend interviews that Israel has hit thousands of targets in Syria over the years of the civil war there.

The Israeli army also announced that it found the last and largest Hezbollah cross-border tunnel and that it had ended its six week operation to destroy the six tunnels. The Lebanese Ambassador to the UN called on the UN Security Council to act against a border wall Israel is building along the joint border, saying it breaches a post-Second Lebanon War resolution. And the papers continued to ask whether Hezbollah leader Sheikh Hassan Nasrallah was in bad health, for which an Iranian official said Israel was spreading lies about Nasrallah's health.

Also of interest was an article from two weeks ago that Ynet translated now, which gives fascinating detail about how the Shin Bet tried to extract a confession from a suspect of Jewish terror. In one incident described by the court, an undercover policeman acting as a prisoner threatened the 17-year-old minor into entering a bathroom with him, and, as part of their deception and efforts to scare the youth, sounds could be heard from the next stall as if Arab prisoners were being cursed and harassed by interrogators. Haaretz+’s article on the court's release of the Jewish terror suspect who retracted his confession does not provide as much insight and is behind a paywall.

Features:
Tea With Assad, Hugs With Adelson: Tulsi Gabbard's Unique Views on Israel and the Middle East
An Iraq veteran who endorsed Bernie Sanders, Gabbard is hoping to win over progressive Democrats with rare views that even some right-wing evangelicals like. (Amir Tibon, Haaretz+)

Elections 2019 Commentary/Analysis:
Trust Israeli Arabs to Splinter Politically (Odeh Bisharat, Haaretz+) I hereby announce with regret, mixed with relief, that we must adopt the words of Ecclesiastes: 'There is nothing new under the sun.’ In a few decades, some diligent historian will discover that at the very moment that the Arab world was mercilessly riven by schisms, a uniquely favored group, comprising some 2 million Arabs, confounded all expectations to unite behind an electoral bloc. We can confidently predict that our dedicated but pitiable historian will never understand, despite all his research, the reason it disintegrated.
We must not let only one version be discussed in the media on the eve of the elections (Dr. Haim Misgav, Maariv) The appearance of the prime minister, while defining his expected announcement as "dramatic," has finally given the world a different perspective on what happened in his interrogations.
Let go, Bibi, let go: The opportunity for a quick exit without prison is closing (Ben Caspit, Maariv) Among his associates, that is, those who are not yet state witnesses, the feeling of defeat spread throughout the week. For the first time they look at him and see a drowning man clinging to the straw. An outgoing prime minister whose expiry date passed.
The death rattle of Netanyahu's premiership (Shimon Shiffer, Yedioth/Ynet) The prime minister's new lawyers were probably none too pleased with his 'dramatic speech' last week, when he tarred and feathered his predecessors, bringing up Sharon and Olmert's past legal woes in a desperate attempt to save himself.
Corruption and distortions in the holy system: not everything is pure in the State Prosecutor 's Office opinion (Meir Uziel,  Maariv) Someone wants to make people believe that there is a perfect system up there that mortals are unable to know its secrets. Many senior jurists even claim that the PM is persecuted.
The Flaw in Israel's Electoral System (Raviv Drucker, Haaretz) Our electoral system encourages such warped politics - you can gain power even when 52 percent of the public doesn’t want you to be the next prime minister.