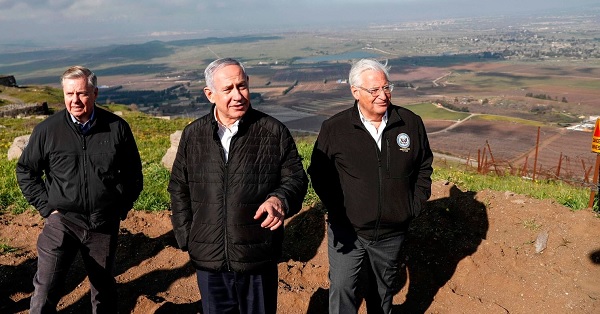 The extension of Israeli law to the Golan Heights in 1981, effectively annexing the territory, is considered by an overwhelming majority of international legal experts to be a violation of international law. US recognition of that would threaten the prospects for an eventual Israeli-Syrian peace settlement – and by extension the prospects of a peace accord between Israel and other Arab states – once Syria becomes a governable, stable nation that can credibly negotiate peace with Israel.

To be clear, we are not advocating Israeli withdrawal from the Golan Heights under the current circumstances. Syria is in shambles, swarming with belligerent extremist groups, and Iran has gained a foothold there in the course of Syria’s horrific civil war. There is no credible Syrian regime with whom Israel could conduct peace negotiations. Under the current circumstances, returning this territory to Syria could put Israeli security in jeopardy.

The fact is that for these very reasons there is no pressure on Israel to withdraw from the Golan Heights now. Israel’s current hold on the Golan Heights is solid and US recognition of the annexation of the Golan Heights will not enhance Israeli security, despite President Trump’s claim it is of “critical strategic and security importance to the State of Israel and Regional Stability!”

Such a policy change would serve as wind in the sails of those in Israel who want to annex the West Bank or parts of it. West Bank annexation is a top priority of Israeli right-wing politicians, and they view an American recognition of Israel’s annexation of the Golan Heights as a precursor to a US endorsement of Israeli annexation of the West Bank. MK Yuli Edelstein, Knesset chairman and second on Likud’s election slate, said that explicitly last week, following the publication of the State Department’s annual human rights report, which for the first time referred to the Golan Heights as “Israeli-controlled,” rather than “Israeli-occupied.”

The US should not in any way help pave the way for annexing the West Bank. Annexation of the West Bank – whether all or part of it – could very well mean the death knell to the two-state solution and therefore to Israel’s future as a national homeland for the Jewish people and a liberal democracy.

In 1981, the US government under President Reagan joined the United Nations Security Council’s unanimous adoption of UNSC Resolution 497, which proclaimed that the “Israeli decision to impose its laws, jurisdiction and administration in the occupied Syrian Golan Heights is null and void and without international legal effect” and called on Israel to rescind its decision. Acceptance of annexation in the case of the Golan Heights, contra international law and longstanding US policy, would enflame anti-US sentiments in the Middle East and beyond, while further eroding US moral authority around the world.

There is simply no affirmative reason to make this policy change. If the Trump administration does it now, on the eve of Prime Minister Benjamin Netanyahu’s visit to Washington before the Israeli elections, the only reason can be Trump’s desire to boost his personal friend and ally’s electoral fortunes.

That’s wrong, and it’s no basis on which to conduct US foreign policy.