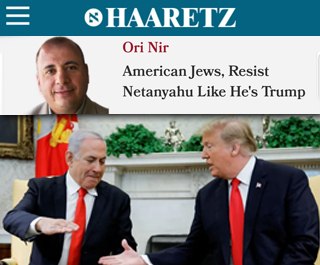 Together, Netanyahu and Trump seem to be colluding to kill the two-state solution and pursue West Bank annexation.

Over the past decade of Netanyahu’s rule, many American Jews who care about Israel have experienced ethical dissonance as they witness Israel’s public life, Knesset legislation, and government policies escalating in a direction that violates the liberal values that they most cherish. Under the new government that will soon form, this ethical dissonance is likely to intensify.

With Trump in the White House, and with an emboldened Netanyahu, almost certainly probably on his last term as prime minister, poised to do whatever he can to escape a corruption conviction and pressured by the extreme right to embrace ever more extremist policies, this is a time for resolve.

Resisting the temptation to trust that moderation and reason will prevail.

Resisting the antiquated notion that American Jews ought not get involved in Israeli public life.

Resisting the claim that they have no right to assert their concern over the fate of the national home of the Jewish people.

Resisting the notion that they don’t have the capacity or the ability to resist simultaneously Trump and Netanyahu.

If you care about Israel’s future, and America’s, there’s no binary choice between Trump and Netanyahu. In fact, they should be resisted in tandem. Their policies on Israel’s conflict with the Palestinians are synchronized and undistinguishable.

Netanyahu is kneecapping the two-state solution, and the Trump administration is handing him the gun. Trump and his aides have already done terrible damage to the Israeli-Palestinian relations. It is now all but certain that Jared Kushner’s so-called "ultimate deal" will not call for a two-state solution, and may therefore deal an ultimate blow to any future Israeli-Palestinian conflict resolution efforts.

What does resisting mean?

Know the facts and understand them. There is a multitude of sources for staying informed about Israel, whether mainstream media outlets, Israeli organizations or American Jewish groups. Netanyahu and his Israeli right-wing allies are expert manipulators. Their manipulation of the truth resembles Trump’s practices. It’s important to rely on trustworthy sources, to avoid propaganda, and to seek reality checks.

Avoid distractions. Netanyahu and Trump are masters at generating strawmen enemies and threats, made-up crises and straight-out lies as a means to confuse and neuter their opposition, successfully so.  To effectively resist, you must keep your eyes on the ball.

That means vociferous opposition to West Bank annexation and to the assault on Israeli democratic institutions and civil society. It means openly and uninhibitedly discussing and airing concerns over Israeli government policies in synagogues, community centers, and Hillels, and articulating these concerns to Israeli and American leaders and publics. Obviously, with compassion and care, but with unflinching moral fortitude.

Find allies in Israel and empower them. Bolster Israeli democracy and democratic institutions and help defend the sectors of Israeli civil society that have become the target of government assault and are bound to suffer further attacks. Resist the delegitimization of Israel’s Arab minority.

Thirteen years ago, mainstream American Jewish organizations – including the Conference of Presidents of Major American Jewish Organizations, the Anti-Defamation League, the UJA Federation of New York, and others - formed an Inter-Agency Task Force on Israeli Arab Issues. Despite its potent title - Task Force, no less - the organization has focused on meek, low-profile education. It’s time to turn from raising awareness to effective advocacy.

Intensify existing alliances with like-minded non-Jewish organizations, institutions and individuals. This fight is not only over Jewish community concerns and Israeli national interests and wellbeing. It is also about American national security and global stability and peace.

Israel's election results mark a paradigm shift for Netanyahu and his right-wing allies. They should usher in a fundamental shift in American Jews’ practices toward Israel’s extremists and their alliance with Trump. It’s time to support the Israeli institutions that reflect your values, and actively and resolutely resist those who trample them.

Ori Nir, a former Washington correspondent of Haaretz and The Forward, works for Americans for Peace Now, the sister-organization of Israel’s Peace Now movement. Twitter: @OriNir_APN