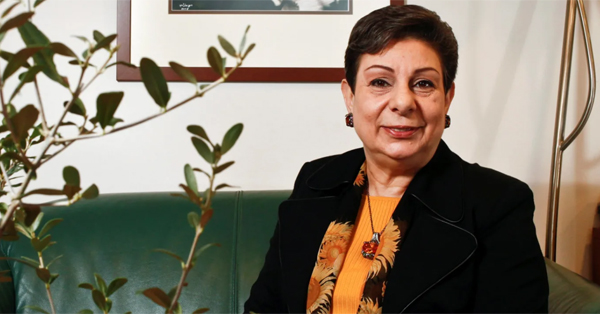 
You Must Be Kidding:
“I’ve met…every Secretary of State since [George] Shultz and every President since George H.W. Bush.”
--The US rejected the recent visa request of veteran Palestinian official, Hanan Ashrawi, who received her Ph.D in the US and who has visited the US many times, and whose grandchildren live in the US. Ashrawi said no reason was given.*
Quote of the day:
"Choose any of the following: I’m over 70 & a grandmother; I’ve been an activist for Palestine since the late 1960’s; I’ve always been an ardent supporter of nonviolent resistance."
— Veteran Palestinian politician, Hanan Ashrawi (@DrHananAshrawi) was confounded by the US decision not to give her another visa.*

News Summary:
The battle over Israeli Prime Minister Binyamin Netanyahu’s immunity, the confession by an elderly man to a 45-year-old murder for which another man sat in jail, and the excitement ahead of the Eurovision semi-finals tonight in Tel-Aviv were top stories in today’s Hebrew newspapers.  Also, Maariv’s gossip columnist ‘reported’ that the daughter of senior Likud MK, Gideon Saar, is dating an Arab-Israeli. She called the girl’s mother, Saar’s ex-wife, to ask how she felt about the relationship. The item never actually mentioned that the newsworthy part was the fact that the boyfriend is Arab and that the girlfriend’s father is a senior Likud member. See below.

The combination of thousands of European tourists in Israel for the Eurovision singing competition and the start of Nakba Day events tomorrow marking the Palestinian people’s 'Catastrophe,' when Israel was created on their homeland, has caused concern. The US has warned US citizens in Israel to exercise extra caution. Israel not only deployed Iron Dome anti-rocket battery systems across the country, it also tightened its protocol on opening fire on Palestinians so as to avoid Israeli killings of Palestinian demonstrators, which could spark another escalation and rockets towards Israel, when its filled with international visitors. [NOTE: The question then should be asked: if it is possible to tell soldiers that they can’t open fire on demonstrators unless its a matter of imminent threat to life, then why wasn’t this done until now? - OH] Marking the 71st Nakba anniversary, the Palestinian Central Bureau of Statistics said 13.1 million Palestinians live worldwide since the 1948 Nakba, with more than half of the Palestinian population living in historic Palestine.

With the exception of Israel Hayom, the Hebrew newspapers warned of doom following the reports that Netanyahu was drafting a legislative bill to override High Court rulings, bills to limit the attorney general's powers and grant automatic immunity to MKs. Netanyahu insisted the media was ‘sowing fear’ and that the bill was meant to ‘restore balance.’ But most Israeli commentators and analysts were not convinced. Even the right-wing Yedioth columnist, Ben-Dror Yemini, called it ‘Erdoganization.’ Maariv ran an Op-Ed by Professor Eli Zeltzberger titled, “Clear and Immediate Danger.” It’s main article on the subject was titled with a quote by MK Yair Lapid: “Netanyahu wants to turn Israel into Turkey.” The internal memo that Israel Hayom exclusively obtained shows the government plans to dramatically alter the relationship between the branches of government at the expense of the judicial branch and describes 16 separate measures to bolster lawmakers and weaken courts. It was part of the coalition talks between Likud and the United Right.A political firestorm erupted on Monday after Israel Hayom published an internal memo showing the next government The memo, which lists Blue and White MK Karin Elharrar joined Zandberg, saying, “This is not just some judicial reform plan, it is a plan to eliminate the High Court of Justice and get rid of our gatekeepers, ending the checks and balances and dealing a fatal blow to Israeli democracy.” Ironing out these controversial coalition agreements takes time. Yesterday, President Reuven Rivlin acceded to Netanyahu’s request for a two-week extension to form the next government.Haaretz+ has an explainer on how a broader court override bill would help Netanyahu. Meanwhile, sources in the State Prosecutor's Office told Channel 13 News that “If Netanyahu does not attend the pre-indictment hearing, the following day an indictment will be filed against him.” They said they were furious at the Prime Minister's conduct, saying that he is "making a mockery of the (judicial) system.”(See Maariv)  Also, Yedioth reported that an associate of Netanyahu is a candidate for the position of state comptroller. Reuven Schiff, former president of the Accountants Association, received an official request to serve in the senior position.

“Get to know the new boyfriend of Gideon Sa'ar’s daughter”
Alona, the daughter of Gideon Sa'ar from his first marriage has a new boyfriend. Why is that interesting? Get Liora's scoop.
(Translation of gossip article on Maariv’s gossip website.)
While Knesset Member Gideon Saar is waiting for his appointment in the government, which today received a two-week extension from President Reuven Rivlin, Liora reveals exclusively that Sa'ar's youngest daughter from his first marriage to Shelly, Alona, who is an actress and student at Yoram Levinstein's acting school, is dating a student who studies with her, the actor Amir Khoury, who acted in the series "The Greenhouse" and “Fawda".
Shelly Saar, how do you feel about your daughter's boyfriend?
“They are a charming couple, I love both of them very much."
Sa'ar is now married to former former news anchorwoman, Geula Even, is one of the most popular politicians in the Likud and among right-wing voters, and although he is considered Prime Minister Benjamin Netanyahu's opponent, he was ranked high in the party's primaries and is expected to be appointed in the next government. Saar is considered one of the strongest opponents to leaving [African -OH] refugees in the country, and claims that this is a problem that must be solved soon, while sending the infiltrators back to their countries. Gideon Saar's response has not yet been received