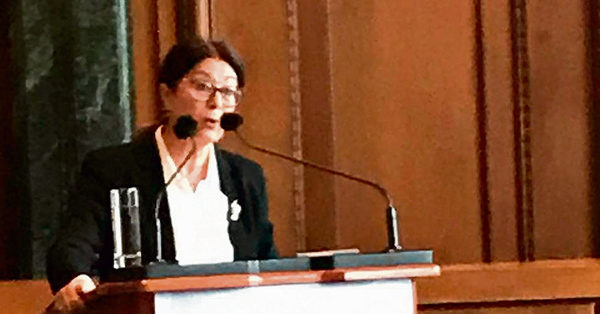 Quote of the day:
“The safeguarding of...judges’ independence is therefore one of the cornerstones of every democratic regime.”
--High Court Justice Esther Hayut broke her silence and responded to the reported plans by Israeli Prime Minister Binyamin Netanyahu to curtail the authority of the High Court.*
Number of the day:
2.8 billion.
The amount of dollars the Netanyahu governments have invested in settlements in the West Bank over the last 10 years, according the the latest Peace Now report.**

News Summary:
While Israel Hayom reported on the 'indispensable alliance' between the US and Israel at an event yesterday marking one-year since the US embassy move to Jerusalem (Yedioth noted that, ironically, the US embassy 'ruined the party' by releasing a statement that day warning citizens of danger due to the anniversary of the transfer of the embassy, as well as Nakba Day and the Eurovision competition), the other newspapers focused on Israeli Prime Minister Binyamin Netanyahu’s coalition and legal problems and the pointed speech by the Israeli Chief Justice Esther Hayut. The exciting first semi-final performances at the Eurovision in Tel-Aviv and the concern of an escalation with the Palestinians, who are marking Nakba Day today, also made top stories, as did the level of tension between the US and Iran, which varied depending on the newspaper: Maariv calmed readers with a headline quoting Iran saying that “There won’t be war with the US,” Haaretz’s Amos Harel wrote that “Iran threatens the US and Saudi Arabia,” Israel Hayom’s commentator Oded Granot wrote that “Iran is moving from threats to action,” and Yedioth reported that relations between the two countries were “on the verge of boiling.”

Yedioth’s Yuval Karni wrote that “Despite the extension Netanyahu received (to form the coalition government), time is running out and each of the coalition partners is demanding to sign last on an agreement in order to see what the others have received. Avigdor Lieberman is waiting to see the laws to be given to the ultra-Orthodox, the ultra-Orthodox are waiting for Lieberman, Bezalel Smotrich is buying time, apparently for tactical reasons of negotiations (to get the sensitive Justice Ministry portfolio), and Moshe Kahlon wants to know how much all this will cost him.” Meanwhile, Netanyahu finally paid one of his attorneys, who then collected the evidence material against the prime minister in the three corruption cases, while the rest of the legal team is considering resigning over pending fees. Part of Netanyahu’s negotiations with coalition partners is to get them to agree to sign on to laws that override High Court rulings and give him immunity from those criminal cases. Yesterday, MK Gabi Ashkenaz (Kahol-Lavan) said, “No one is above the law, even if he is prime minister…We must make sure that the prime minister will not succeed in creating for himself a city of refuge.” (Maariv)

*But the bigger headlines were made by High Court Chief Justice Esther Hayut, who “broke the policy of silence on Tuesday,” and referred for the first time to Netanyahu’s reported attempts to draft laws that will reduce the power of the judiciary. Speaking in Nurnberg, Germany at the annual legal conference of the Israel-Germany Lawyers Association, which this year dealt with the place of supreme courts in a democratic state, Hayut invoked the Nazi era in an implicit criticism of Netanyahu’s legislation plans, warning against harming the independence of the legal system, which was ‘one of the cornerstones of democracy.’ In a full-page article on page 4, Yedioth’s Tova Tzimuki called Hayut’s speech the “Nuremberg Speech.” According to Hayut, the choice to hold it in Hall 600 of the Hall of Justice at Nuremberg was moving and profoundly symbolic. "This is because in the 1930s, in Nuremberg, law and justice deteriorated into one of the lowest points in human history," she said. "But here in Nuremberg, in the same place where the racial laws were enacted in 1935, in which special trials were held in the special court established by the Nazi regime, the Allies returned and channeled the law and courts for the purpose for which they were originally intended - justice - and prosecuted the war criminals." According to Hayut, the younger generation in Israel was born into a new reality, decades after the end of World War II. "It is reasonable to assume that you tend to believe that the institutions that defend democracy will prevail and survive every attack. But even existing institutions can be deprived of their power and essentiality,” she warned. As proof, she cited a 1933 editorial in a German Jewish newspaper that argued that Adolf Hitler and his newly elected Nazi party wouldn’t be able to carry out their stated plans due to the country’s checks and balances on government power. “One of the universal lessons we should learn from the historical events I mentioned is that judicial independence, on the institutional and personal level, is one of the most important guarantees that the individual has an address to turn to to protect their rights,” she said. “The safeguarding of that principle and judges’ independence is therefore one of the cornerstones of every democratic regime.” (Also Haaretz+ and Maariv) An Israeli judge who asked not to be named told Yedioth, "We are used to many years of incitement against us and our role in Israeli society, which harms the public's faith in the court. The fact that we cannot comment on the distorted things politicians say makes us face preposterous accusations all the time. Supreme Court justices are democratic patriots who put the welfare and prosperity of Israeli society first, no less than any politician. We live in the Israeli reality and understand its needs, and have no intention of taking over or intentionally dismissing decisions by the Knesset and the government." In a separate article, Yedioth’s legal affairs reporter, Tova Tzimuki, interviewed unnamed political figures who said that Netanyahu's legislative push is all about dodging prosecution. And Channel 13 revealed that Netanyahu asked tycoons to send him cigars during Israel’s Memorial Day and during the conflict with Gaza. (Also Maariv)

Neta Barzilai made an amazing performance last night at the first semi-finals of the Eurovision song competition being held in Tel-Aviv, where Madonna arrived last night after rebuffing calls by BDS activists to boycott the event where she is expected to perform Saturday. "I'll never stop playing music to suit someone's political agenda, nor will I stop speaking out against violations of human rights,” she said.

According to Maariv, Israel doesn’t expect an escalation with Gaza, despite the fact that thousands of Gazans were expected to attend protests today marking Nakba Day and Israeli security forces braced for clashes. Haaretz+ reported that following the cease-fire, Gaza protest organizers urged restrained protests for Nakba Day Marches today. But the Qatari envoy to Gaza, Muhammad al-Amadi, said, "The situation is volatile, action must be taken to stop the danger,” Maariv, reported noting that Gazan civil servants will receive 50% of their January salary. Ynet English ran a Reuters article about Palestinian refugees who still hoped to return to their lands inside Israel as they marked Nakba Day. And Maan reported on the launch of a global campaign to deactivate Airbnb on Nakba Day, today.

Quick Hits:
Features:
A New Spin on Kibbutz Volunteering — for Laptop-lugging Millennials
New project offers digital nomads the chance to spend a month using communal settlement’s facilities while doing their own work. Upside: No backbreaking farm tasks; downside: it can cost as much as $3,000. (Judy Maltz, Haaretz+)
'Safe Haven'? What Israeli, Palestinian Scholars Think About Rashida Tlaib’s Holocaust Comments
Leading academics express confusion at Democratic congresswoman’s reading of events between Arabs and Jews in pre-state Israel, though some say reaction to her comments is overblown and politically motivated. (Allison Kaplan Sommer, Haaretz+)

Commentary/Analysis:
If Need Be, He’ll Replace the State (Zvi Bar'el, Haaretz+) A prime minister who was elected by just one-third of the eligible voters sits there, drafting a law for himself, crumpling the justice system, spitting on basic ethics, convinced that he is the victim of the system he himself created, and the public goes on believing that it’s all just a circus act. This method allowed the prime minister to trigger an election and now to build himself a barricade of power-crazed cabinet members who demand bags of bribes in exchange for signing a writ of surrender to the supreme leader. It won’t be a court that will determine Benjamin Netanyahu’s innocence, but rather his fellow gang members, who are already counting their protection money.
It's Israel that's in danger, not Netanyahu (Amnon Abramovich, Yedioth/Ynet) The Jewish state is falling victim to narrow political calculations whose sole aim is to save the prime minister's skin; the surrender to ignorance and regression has led to a failing education system and a widespread desire to leave the country that has the people's prosperity at the very bottom of the government agenda.
Wolf, wolf: The public is not moved by legislation against the High Court of Justice (Yanir Kozin, Maariv) The prime minister, who has been careful in the last decade to remove any initiative against the court, now argues that it is necessary to pass laws that have been disqualified or delayed, but some of them have not been fully legislated. The Likud headed by Netanyahu has been in power for a decade, and almost all this time Netanyahu was careful to delay, postpone and remove any initiative aimed at "restoring the balance between the authorities" and he even boasted about it. In addition to the fact that this is his fifth term, the great difference between Netanyahu of now and the Netanyahu of the last decade is his personal legal situation and if this will be the motive for enacting the various laws, it will probably not pass the High Court test.
Disingenuous Liar and Suspect (Haaretz Editorial) As the last of the populists he tries to instill in Israel the feeling that the state has for decades been under a judicial dictatorship headed by the High Court of Justice, which has used its power to expropriate the nation’s sovereignty. “I am determined to act without fear on your behalf, Israeli citizens. That’s why you elected me.” These are outright lies. They are factually untrue: The High Court has indeed overruled amendments to the Prevention of Infiltration Law, but the bills mandating the death penalty for terrorists and the expulsion of their families never even reached the court. (In effect, Netanyahu himself stopped the death penalty law, and that’s a good thing.) The falsehoods also have to do with values: The only real threat to Israeli democracy is Netanyahu and his co-conspirators in this crime, who are trying to subjugate the legal system to the will of the electorate. In the absence of an independent judiciary, majority rule becomes unrestricted. In the absence of the separation of powers, which in the absence of a constitution is the only guarantor of human and minority rights, democracy would lose the ability to defend itself.