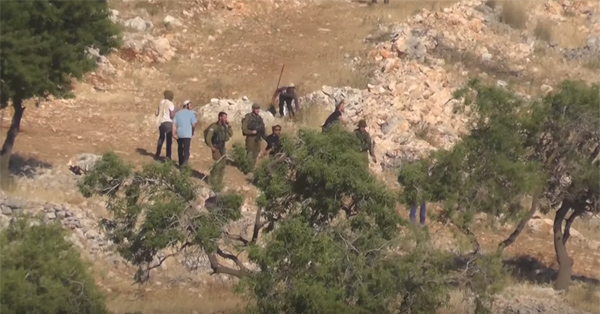 You Must Be Kidding:
Settlers were filmed Friday throwing rocks at Palestinians near Asira al-Qibliya, a West Bank village close to the settlement of Yitzhar, as Israeli troops watched without intervening.**
Front Page:
Haaretz
Yedioth Ahronoth
Maariv This Week (Hebrew links only)
Israel Hayom

News Summary:
The killing of four more workers in another construction site accident in Israel - and the lack of action by the government, Israeli Prime Minister Binyamin Netanyahu’s difficulties in forming a coalition due to his partners’ demands, the White House announcement of the first part of the ‘Deal of the Century’ peace plan and the complaints about Madonna’s singing out of tune during her Eurovision performance were the top stories in today’s Hebrew newspapers

With the clock ticking, Netanyahu told his potential coalition partners to ‘get back to reality’ and give up on their ‘unrealistic’ demands, but Netanyahu also got his present government to cancel the limit on the number of ministers so that he could offer more high positions to them. Right-wingers attacked Likud MK Gideon Saar for rejecting the personal immunity law that Netanyahu wants to pass, Maariv reported, and the Permits Committee gave Netanyahu until end of the week to disclose his finances otherwise they will reject his request to be allowed to get friends to foot his legal defense. (Also Maariv)

The White House announced that the US will hold an economic 'workshop' in June where the first part of US President Donald Trump's peace plan will be revealed. The conference is meant to bring together government officials and business leaders from around the world in an attempt to convince them to invest in the Palestinian territories and help jump-start the economic side of the ‘Deal of the Century.’

Many on social media attacked Madonna’s performance, giving her ‘zero points,’ for signing out of tune. Some criticized her for having dancers' wear clothes displaying the Israeli and Palestinian flags. Madonna responded: ’Peace is not political.’

Features:
He Thought if He Just Ran Fast Enough, He Could Get Out of Gaza
There are some 1,600 amputees in Gaza. Here’s the story of one. (Alyona Synenko, Haaretz+)
The soldier who went AWOL was thrown out of his house, the military indictment against him was canceled
The military prosecution agreed to erase the charges against the cook, Corporal R., despite 129 days of desertion, after it became clear that his parents had threw him out because he was not serving in a combat unit. Cpl. R., it should be noted, wanted to serve in the army as a combat soldier, but in the wake of low recruitment data, he was found unsuitable for combat duty. At the end of basic training he was assigned as a cook at a naval base in the south. His parents rejected this  and his mother even turned to the commanders and told them: "We did not raise a cook, we raised a fighter." They threw him out of the house and he was forced to sleep at the homes of friends or stay on his military base on weekends. He asked to be recognized as a ‘lone soldier,’ but this was delayed. Due to his difficult situation he deserted and began to work to make a living. In court, after the full background of the circumstances of his defection was presented, the military prosecution agreed to cancel the indictment without a criminal record. It was also decided that R. 'would return to his previous role as a cook, complete his recognition as a ‘lone soldier’ and receive support from the army, including housing, and then continue to try to transfer to combat duty. In a conversation with the mother, she confirmed that she had removed her son from the house and forbade him to sleep there as long as he did not serve in combat duty. She confirmed that she had urged him to defect from the army until he was assigned combat duty. According to her, she thought she did the right thing for her son. (Maariv)