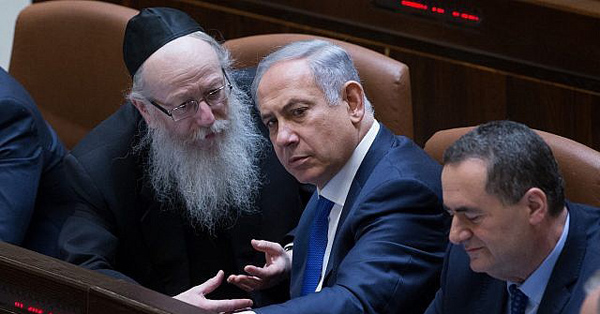 Quote of the day:
"It's called poetic justice."
--Commentator Ron Kahlili writes that he has no empathy for senior Likud MK Gideon Saar, whose daughter is being derided for dating an Arab-Israeli, because Saar never condemned the years of incitement against Arabs from the government and leader of his party.*
Front Page:
Haaretz
Yedioth Ahronoth
Maariv This Week (Hebrew links)
Israel Hayom

News Summary:
Leading Israeli attorneys and Kahol-Lavan leaders declared they won’t let Israeli Prime Minister Binyamin Netanyahu pass his controversial legislation for immunity and overriding the High Court, the coalition submitted the name of one person to become the next state comptroller after withdrawing another name at the last minute, shortly after anti-Netanyahu activist Eldad Yaniv responded to Yair Netanyahu that the candidate was a friend of his, while the former Fatah militant, Zakaria Zubeidi, who said he laid down his arms, was indicted for perpetrating a number of shooting attacks in the West Bank and the Palestinians said they would boycott Trump’s economic conference - the first part of the ‘Deal of the Century’ peace plan - making top stories in today’s Hebrew newspapers. Also, both Israel and Hamas denied the Israeli new report that they reached a six-month cease-fire deal and Arab communities protested against police incompetence after a fourth Arab-Israeli was murdered in three days.

Top Israeli attorneys launched a campaign Monday to ‘save the High Court’ from anti-democratic right-wing legislation.
"It’s inconceivable that because one man has a problem, the entire judicial system is going to be changed," says Dore Klagsblad, who represents Netanyahu benefactor Sheldon Adelson. Tzvika Bar-Natan, who initiated the conference, said, “…We are all here, because we are united here by a tangible sense of danger to the rule of law and the existence of Israel as a liberal democracy. We feel a sense of urgency and feel that the rule of law is on the brink of an abyss.” Attorney Eyal Rozovsky said that there is a sense that the government intends to actually drive a D9 bulldozer over the High Court. Attorney Giora Arginist said that they are prepared to lie under the D9's bucket in order to prevent the destruction of the High Court. Attorney Eli Zohar, who has defended Ehud Olmert in the past, said: "We have to clarify this to a society that does not understand what we are talking about. The idea that the Knesset can pass a law that will execute us, without any place to appeal, is stronger than all the nice words we use at every opportunity. (Maariv) The lawyers took a photo of themselves in front of a sign that said, “You will have to pass through us. And you won’t pass by us.” (Ynet Hebrew) In the Knesset, Kahol-Lavan leader Benny Gantz derided Netanyahu’s bid to expand the government cabinet as ‘political bribery’ and urged Netanyahu to ‘be a man’ and drop the legislation that would shield him from prosecution. “Stop this now. You have gone too far. We will fight this in parliament, on the street, in the squares, in schools, in the media in order to protect democracy for everyone. We will not let it happen,” Gantz vowed, urging Israelis to take to the streets to protest. Meanwhile, Netanyahu asked the State Attorney's Office to postpone his criminal indictment hearing by a year, citing the enormous amount of investigative materials to be examined in the corruption charges against him.

“Any Palestinian that attends the Bahrain conference would be a collaborator for the Americans and Israel,” said PLO Executive Committee member Ahmed Majdalani, expressing the Palestinian sentiment about the U.S.-led economic conference. The Palestinians said they weren't consulted about the event meant to help them, and where the first stage of the Trump peace plan will be revealed. Any American peace plan that ignores the Palestinian people's political aspirations for an independent state is doomed to fail, added senior Palestinian official, Nabil Abu Rudeineh. US President Donald Trump's special envoy Jason Greenblatt said the Palestinian Authority “is acting in a shameful manner…Our vision can fundamentally change their lives." Senior Palestinian official Nabil Shaath responded: "We have nothing to discuss."

About 500 residents of the towns of Tamra and Shfaram protested in front of the police station in Shfaram Monday and in Baka al-Garbiyeh they will protest today against the Israeli police's failure to fight crime in Arab communities. Since the beginning of the year, 24 Arab citizens have been killed in Israel in gun violence. Yesterday Baka al-Garbiyeh resident Ahmad Mazen Dra'ima, 35, was shot to death in front of his wife during the funeral of Wassam Joudat Yassin, who was murdered the night before in Tamra. The municipality and the People's Committee decided municipal offices and institutions will be striking Tuesday in protest over the incident. Banks and post offices and other official establishments will be closed until 2 P.M. Schools will remain open, but will hold educational activities against violence. Leaders pointed the finger at the ‘racist Netanyahu government' and accused police of neglecting their communities. “If the victims were Jewish, the reaction and treatment would be different,” said MK Ahmad Tibi. (Also Maariv)