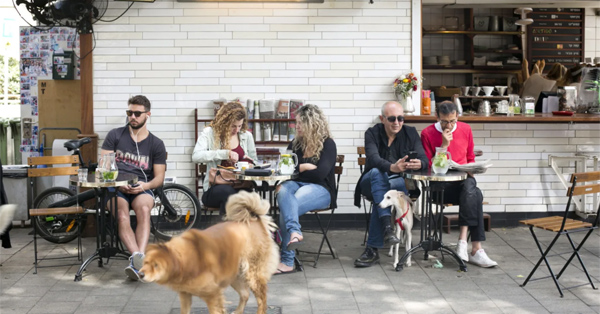 Quote of the day:
"Everyone (almost) thinks Israel needn’t seek a peace accord in the foreseeable future; everyone (almost) is sure there’s no partner. Everyone (almost) supports hawkishness toward Iran and harsh blows in Gaza, believes Europe is anti-Semitic and admires Donald Trump."
--Commentator Rami Livni writes that in contrast to the popular belief that Israeli society is divided, the differences between Israelis are actually shrinking.*
Front Page:
Haaretz
Yedioth Ahronoth
Maariv This Week (Hebrew links only)
Israel Hayom

News Summary:
The storm at the submitting of the amendment to the immunity law expected to prevent Israeli Prime Minister Binyamin Netanyahu from facing the law, the criticism by the outgoing State Comptroller of the coalition’s candidate to be the next State Comptroller over lack of transparency in the past (Maariv), and the concern over a heat wave that starts today, on the eve of Lag B’Omer holiday, when Jews light bonfires were top stories in today’s Hebrew newspapers.

Likud MK and Netanyahu loyalist, Miki Zohar, insisted he was not Netanyahu’s “messenger boy” after a storm broke out when he submitted the bill to amend the Immunity Law, which would give Netanyahu immunity from the three corruption cases he faces. Zohar also declared that Netanyahu’s case proves that the amendment was necessary “because it’s the first time that a man is accused of bribery when he did not receive a penny to his pocket.” Raz Nazri, the deputy attorney general, slammed Zohar’s remarks, Maariv reported. “The Attorney General’s decisions are made on the basis of his professional role and what is presented to him.  I do not recall a case in which the Knesset committee debated whether  there is or isn’t evidence…To come and claim that the Attorney General is committing political persecution is something that should not be said.” Haaretz+ reported that sources in the Likud believe that Netanyahu will likely not promote the new so-called immunity law, due to the controversy even in his own party and also his promise prior to the elections that he wouldn’t. Instead, he will focus on making it harder for the High Court to overturn legislation. MaarivOnline quoted former senior IDF commander, Brig. Gen. Ilan Paz, who said about the immunity law amendment and the High Court overriding law: "I feel that the state is being stolen.”

Features:
Elderly Russian Immigrants and Cows — Visiting the Golan Site Earmarked for ‘Trumpville’
‘If we get all of this because Netanyahu wants to make Trump happy, that’s fine with us,’ says local council rep in Golan Heights as plans ramp up for ‘new’ neighborhood honoring U.S. president. (Allison Kaplan Sommer, Haaretz+)
Mizrahi rebel: Bidding farewell to an Israeli Black Panther
Kochavi Shemesh, one of the legendary leaders of the Israeli Black Panthers, believed that the liberation of Mizrahim was bound up with the freedom of Palestinians, black South Africans, and other oppressed people. He passed away last week at the age of 75. (Asaf Shalev, +972mag)
Haaretz Photo Blog Seen From Above: Shedding New Light on Familiar Israeli Landscape
Lawyer Adam Shpigel discovered drone photography and started to look at 'even the normal and boring places that we pass by every day' from a different angle. (Daniel Tchetchik, Haaretz+)