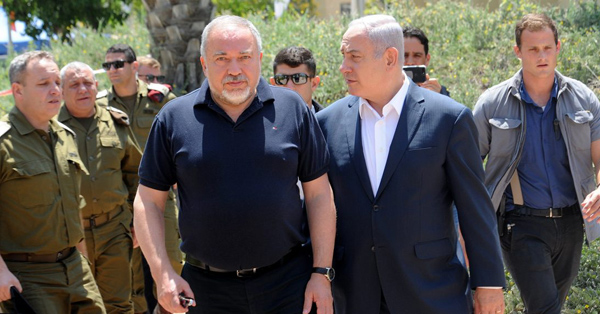 Quote of the day:
“I will tell them about myself, I’ll listen to them, and I’ll tell them - let’s live together in peace.”
--Mika Cohen, 15, from a moshav near the Gaza Strip, has hopes for her meeting with Arab youth at an international leadership conference in New York.*

News Summary:
Significant progress toward a coalition government with MK Avigdor Lieberman likely returning to the job that he quit, while the Attorney General agreed to postpone the pre-indictment hearing again for Prime Minister Binyamin Netanyahu and people in the judicial system fear this will give Netanyahu time to wiggle out of being put on trial, as the protests expand against his assumed plans to pass laws to limit High Court powers and receive immunity from the law - making top stories in today’s Hebrew newspapers, along with the mass celebrations for the Lag B’Omer holiday.

Time is what Netanyahu needs and is getting - although not as much as he’d like - to form a coalition government and pass the laws that will prevent the state from putting him on trial for corruption. With five days to go before the extended deadline to form a governing coalition, the papers say Netanyahu has made progress with the ultra-Orthodox parties and with Yisrael Beiteinu leader, Avigdor Lieberman, who will - ironically - get his old job back. Lieberman quit as Defense Minister in November because he advocated pounding Gaza to stop violence, instead of a truce that eases the siege and improves the humanitarian situation. Unable to function with a narrow  61-59 seat government, Netanyahu decided to go to early elections.

Meanwhile, Attorney General Avichai Mandelblit agreed to postpone Netanyahu’s pre-indictment hearing by another three months to October 2nd. It was not the 12 months that Netanyahu's lawyers had asked for, but Yedioth’s judiciary correspondent, Tova Tzimuki, wrote that people in the judicial establishment fear that will be enough time for him to pass the High Court Override clause and then get the Knesset to give him immunity, something he can easily achieve because he will have a majority in the Knesset committees. Afterward, no appeals will be able to be made to the High Court against his immunity because of the Override clause, which will bar judges from overturning administrative decisions. Channel 12 news reported Wednesday night that the coalition agreements include provisions for a particularly wide-ranging version of the High Court Override clause including the ability to re-legislate laws the High Court strikes down and to bar judges from overturning administrative decisions. Maariv reported that Netanyahu’s top lawyer has just quit the defense team.

The criticism of Netanyahu’s anti-democratic legislative plans continued. The Israeli academia joined the protest against the immunity and override laws, with some 130 law professors and lecturers announcing the establishment of a coalition for the rule of law, Maariv reported. The organization "Adam Teva V'Din" sent a letter to all members of the Knesset calling for preserving the status of the High Court. And, former attorney-general and former High Court deputy chief Justice, Elyakim Rubinstein, attacked the Likud MK, a Netanyahu loyalist, who submitted the bill to amend the immunity law: "Miki Zohar is throwing sand in the eyes of the public without blinking.” Rubinstein also criticized the Likud party’s  candidate for state comptroller, a man who never served as a judge: “There is a desire to harm the idea of a judge serving in the role of state comptroller." (Maariv) The opposition party Kahol-Lavan is holding a massive demonstration in Tel Aviv Saturday night against the legislation. “Defensive Shield for Democracy” is the slogan of the demonstration, which is also drawing additional parties such as Labor and Meretz, the Israel Democracy Institute and additional public social justice organizations. Maariv’s Ben Caspit writes about the seriousness of these efforts to stop Netanyahu, while Haaretz’s Gideon Levy belittles them. (See Commentary/Analysis below.)

Features:
Alabama, Iran, or Saudi Arabia? We Checked Where Abortion Laws Are Better for Women
Laws in many Muslim-majority countries in the Middle East are actually more lenient than those currently being pushed in some U.S. states, Haaretz finds. (Noga Malkin, Haaretz+)
In Gaza, Dreams of Marriage Crushed by Crippling Debt and High Unemployment Rates
Many unemployed young Gaza men have turned to wedding lenders, but when they can't pay their debts some are forced to go into hiding, while others end up in prison. (AP, Haaretz)

Interviews:
The movie about the yeshiva student from Hezbollah
If a screenwriter would have written the story of Ibrahim Yassin, he would have been told that he had gone overboard. But the young Lebanese man who spied for Israel from inside Hezbollah, converted to Judaism and became the ultra-Orthodox, Abraham Sinai, is a real person. Sinai is now starring in the YES film, "The Yeshiva Student from Hezbollah," which is being screened a the DocAviv Festival. In a joint interview with Tzahi Barkat, the IDF agent from Unit 504, who became his close friend, they talk about the strong and special relationship between them. (Interviewed by Etti Abramov in Yedioth/Ynet Hebrew)

Bursting Tel Aviv Museum of Art’s ‘Bubble Inside a Bubble’
In her first interview as the institution’s director, Tania Coen-Uzzielli says she’ll bring in fashion and design shows and is confident the state cannot enforce censorship of art. (Interviewed by Naama Riba in Haaretz+)
Would you prefer to have a source like the Culture Ministry give more money? After all, that could mean an increase in its influence on content.
“The Culture Ministry paid for the entire exhibition we curated in Venice, and didn’t interfere in content at all. I don’t think the ministry can really impose censorship. If there really is censorship the entire country will be up in arms. It’s just noise. Did anyone really stop doing something because of it? I don’t believe in self-censorship. I do believe in respecting different audiences. We as an institution can be critical but we don’t have to be insulting.”
What is your opinion of the removal of the “McJesus” sculpture from the exhibition in Haifa? [The reference is to a controversial work by a Finnish artist that portrayed Ronald McDonald on the cross.]
“At Gil Yefman’s exhibition ‘Kibbutz Buchenwald” [on through August 31], there’s an explanation next to one of the works and there are adult volunteers who serve as intermediaries. The act of removing something from a show is terrible; it’s a difficult step that shouldn’t have been taken. They should have mediated the work in Haifa – for example, to have a religious person at the exhibition, explaining the work. That could have been proper mediation.”