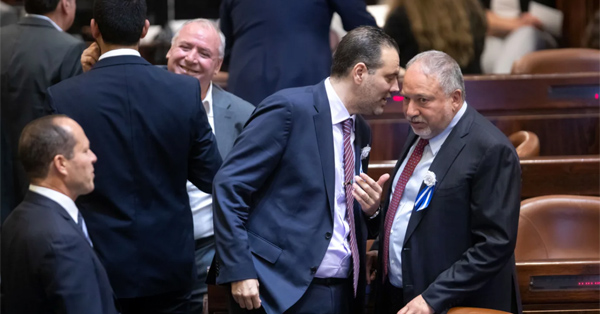 Quote of the day:
“I have to ask: What has changed during this period?"
--Israeli Chief Justice Esther Hayut said after quoting Prime Minister Binyamin Netanyahu, who said in 2017: “One thing that does not change — and should not change — is the need for a strong, independent, honest and impartial court. That has not changed, and it will not change either.”*
Front Page:
Haaretz
Yedioth Ahronoth
Maariv This Week (Hebrew links only)
Israel Hayom

News Summary:
Massive Likud efforts to pressure Yisrael Beiteinu chairman Avigdor Lieberman into entering a government coalition in order to form a government by the Wednesday deadline, while at the Knesset, members passed the first reading of a bill to dissolve the Knesset and at an Israel Bar Association meeting, the country's top jurists presented a united front against Prime Minister Binyamin Netanyahu’s planned efforts to pass laws that will give him immunity from the law and repeal the authority of the High Court, making top stories in today’s Hebrew newspapers. And just before print, the IDF struck at a Syrian army position that launched a missile against an Israeli fighter jet reportedly flying in Israeli airspace.

‘Elections or government’ was the big question of the newspapers after a bill to dissolve the Knesset passed the first of three readings Monday. The Likud MK who drafted the bill said legislative proceedings will not end before Netanyahu’s deadline to form a government Wednesday at midnight. If the bill passes, the new elections are likely to be held September 17. Kahol-Lavan opposes new elections and says it should be charged with forming a coalition. While the front page of ‘Israel Hayom’ blamed Lieberman for the lack of a coalition, Yedioth didn’t take sides and Maariv reported that Likud officials received an order to attack Lieberman and that Netanyahu was also trying to recruit US President Donald Trump to pressure Lieberman. (Trump Tweeted that he hoped “things will work out with Israel's coalition formation and Bibi and I can continue to make the alliance between America and Israel stronger than ever” - an expression of support that experts and former US officials said was ‘unprecedented.’) Netanyahu addressed the nation on television after the failed meeting with Lieberman and appealed to Lieberman saying there was “no need to drag the nation into needless elections that will cost a fortune.” (Commentators said that while it was unclear what will happen, what was clear was that Lieberman was enjoying tormenting Netanyahu. See Commentary/Analysis below.) A senior Labor Party official said Likud officials offered the party to join the government in exchange for supporting the controversial immunity law, which would save Netanyahu from facing trial. But Labor chairman Avi Gabbay refused the offer.

*Meanwhile, the top jurists in the country declared they would fight to protect the authority of the High Court from a law that is meant to castrate it. Speaking at the Israel Bar Association conference in Eilat, Chief Justice Esther Hayut quoted Netanyahu from a speech in 2017, when he said, “One thing that does not change — and should not change — is the need for a strong, independent, honest and impartial court. That has not changed, and it will not change either.” Then she said, “I have to ask: What has changed during this period? ” Speaking of Netanyahu's move to limit the High Court's power, Mendelblit said that "if such an initiative exists, it needs to be opposed." He denied Netanyahu’s accusations of persecution by the courts and the police, calling the claims "nonsense." State Prosecutor Shai Nitzan also defended the legal system against claims by Netanyahu and his supporters of a deliberate campaign to oust Netanhyahu from power. “One baseless claim follows another and the lie — as is the nature of lies which are repeated again and again — starts to slowly seeps into the hearts of many,” Nitzan warned. (Also Maariv)

Features:
The Tiny Team That Tells Israeli Leaders What the Future Is Likely to Bring
The Intelligence Ministry’s Horizon Scanning desk examines global trends to make sure the country isn’t caught flat-footed in a rapidly changing world. (Refaella Goichman, Haaretz+)
Meet the Israelis trying to stop arms sales to dictatorships
For decades, Israel has been selling arms and providing military training to some of the world’s most brutal regimes, from Rwanda to Burma to Pinochet’s Chile. Now a group of Israelis are coming together to try and force the government to stop those arms deals, and come clean about its past and present ties to murderous dictatorships. (+972mag)
Forget AIPAC, the Israeli Army's Biggest Fan Can Be Found in Japan
‘Sigcchi’ has collected tags, insignias, berets, pins and gear for the IDF units he portrays, but it’s a controversial counterterrorism brigade he loves most. (Linda Dayan, Haaretz+)