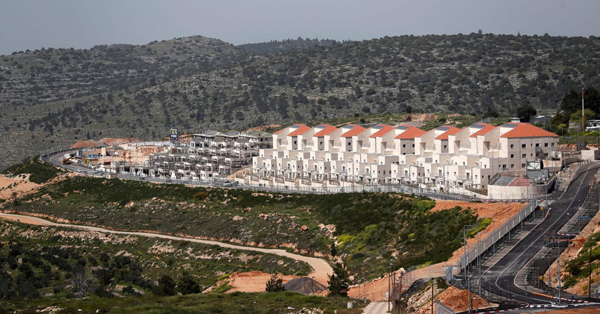 Number of the day:
10.
The increase in the percentage of US Jews who support dismantling all the Israeli settlements as part of a peace deal with the Palestinians.*
Front Page:
Haaretz
Yedioth Ahronoth
Maariv This Week (Hebrew links only)
Israel Hayom

Elections 2019 News Again:
Israeli Prime Minister Binyamin Netanyahu dismissed Education Minister Naftali Bennet and Justice Minister Ayelet Shaked (which most Israeli commentators agreed was out of personal interests, and not because they didn’t make it into the present Knesset - See Commentary/Analysis below), Netanyahu won’t agree to accept Shaked into the Likud party (for the same reasons he fired them) and Netanyahu faces a litmus test of political clout as the Knesset selects a new state comptroller today making top stories in today’s Hebrew newspapers. Also, ‘Israel Hayom’ ran a poll that showed that the right-wing would get a majority of 67 out of 120 seats in the next elections - unless MK Avigdor Lieberman decided his party would stay in the opposition.

Other News Summary:
Events on Jerusalem Day also made top stories: Riots broke out when Palestinian worshipers threw stones and chairs at police who for the first time allowed hundreds of Jews to enter the Temple Mount on Jerusalem Day, which coincided with the Muslim holiday of Ramaddan. The High Court had allowed the police to let the nationalist religious Jewish visitors go up and it also allowed the same people to pass the traditional Flag Parade through the Muslim quarter of the Old City of Jerusalem - waving large Israeli flags - even though the day coincided with the Muslim holiday of Ramaddan.

What did not make big news was the Israeli strike in Syria that reportedly killed 10 Syrian soldiers, Iranian soldiers and Lebanese Hezbollah militants, in response to two rockets fired from Syria at Mt. Hermon in the Golan Heights. The Israeli attack The IDF confirmed it struck in Syria. A video shows the Syrian rocket hitting the Israeli ski resort on Mount Hermon, but Israel does not know who was responsible for shooting it.

*Also, a survey found that a growing number of U.S. Jews support evacuation of all West Bank settlements as part of a peace agreement with the Palestinians rose from 15% in 2018 to 25% in 2019. However, only 6% of Israeli Jews were in favor of such a move. In last year’s survey, 70% said that caring about Israel was “a very important part of my being a Jew.” That number dropped to 62% this year. The percentage that “strongly disagreed” with this statement had risen from 9 to 15%.

Features:
With Transgender Woman's Suicide, Israel’s LGBTQ and Religious Worlds Come Together
Neta Hadid was buried in a religious ceremony with rabbis taking part, while in eulogies she was addressed as both a man and a woman. (Shira Kadari-Ovadia and Lee Yaron, Haaretz+)
In the Sinai, they demand from the Egyptian army: Stop harming the innocent residents
Following a shell that fell last week on the Iftar dinner table of a family in a village in Sinai, sources in the Peninsula say:Stop harming civilians in your war on terror. According to eyewitnesses, when the shell fell on the family's home, the family and neighbors tried to escape from the area, but suddenly a missile was fired at them from a military aircraft, which led to an increase in the number of dead and wounded in the incident. "The Aish family is one of the few families that remained in the village of al-Jura," they say. "In recent years, residents have had to leave the village in the wake of shelling by the security forces. These families did not give up and remained in their homes. Today they are paying the price.” (Yasser Okbi, Maariv)
Photo blog: This Is What Jerusalem Looked Like Just Months After Photography Was Invented
A look at the city when it was still a poor and neglected town at the remote edge of the Ottoman Empire, through the lens of two legendary photographers. (Daniel Tchetchik and Dr. Gil Weissblei, Haaretz+ and Ynet)

Elections Commentary/Analysis:
Netanyahu Sacked Israel's Justice Minister Out of Spite, but Can't Be Rid of Her Forever (Yossi Verter, Haaretz+) The premier fired Ayelet Shaked and Naftali Bennett out of long-standing vengefulness, but there's a chance he may need to put up with them in his next government.
Too Popular (Limor Livnat, Yedioth) Many in the Likud, including ministers and MKs, asked Netanyahu to save a spot on the party list for Ayelet Shaked, the popular minister who suits his new view: weakening the gatekeepers. They didn't understand that it was exactly for that reason, even if there were others, for which he could not allow her to join the Likud: She's very popular. Too popular. And again advances personal interests over national interests again and again.
Until it reaches Sara (Ben Caspit, Maariv) Shaked succeeded in dismantling most of the nests of opposition to integrating her into the Likud party. The problem was that there was no chance of dismantling the main nest: Mrs. Netanyahu.
Self goal (Sima Kadmon, Yedioth) If there was anyone left who needed proof that appointments and dismissals pass through the Balfour (PM's) residence, yesterday he received it (when he dismissed Naftali Bennett and Ayelet Shaked).
If the President had given the mandate to Benny Gantz he would have succeeded in forming a government (Oded Tira, Maariv) Had Rivlin given the forming of the coalition to the chairman of Kahol-Lavan, the map of interests would have been "re-mixed" and everything would have been possible.
Alter egos Trump and Netanyahu, partners in slime, set to help each other (Chemi Shalev, Haaretz+)  The Tweedledee and Tweedledum of nationalist populism, the Bonnie and Clyde of the rule of law and the Spiro Agnew and Huey Long of accountability in government will soon campaign in tandem.
Netanyahu’s 10-year itch (Amnon Lord, Israel Hayom) While there have been leaders who were able to hold onto power for over a decade, it is at this point that things have a tendency to fall apart.
If Israel Wants Somebody Really Crazy, There’s Ehud Barak (Iris Leal, Haaretz+) The opposition, headed by the leaders of the Kahol Lavan party is the outfit that couldn’t win the election and couldn’t prevent the next one from coming, simply because it didn’t try. In shock mingled with frustration, we observed this party’s nonexistence. Genuine political work in recent days required a team to conduct negotiations with everyone. It was a golden opportunity to apologize to the ultra-Orthodox to clear the air, Instead of hearing several times a day how Kahol Lavan’s new legislators were being enticed to defect to Likud, we should have been flooded with pictures of the party’s Gabi Ashkenazi in secret meetings with Public Security Minister Gilad Erdan, and of Kahol Lavan leader Benny Gantz sharing a sandwich with Likud star Gideon Sa’ar. On the night of the first of the three votes needed to dissolve the Knesset, they should have demanded, in accordance with the Basic Law on the Government, that the president give them the mandate to try to form a coalition. They should have even gone to the High Court of Justice if he refused. But that’s Kahol Lavan, and with all due respect to its generals, that party doesn’t have what it takes to fight real wars. And still, a certain opportunity has been created and someone should exploit it. only a genuinely crazy person has a chance to achieve a Big Bang. So this is the opportunity for Ehud Barak, who has been warming up on the sidelines. He’s the only one capable of disturbing Netanyahu’s equanimity and handling the incomprehensible mission of defeating him.