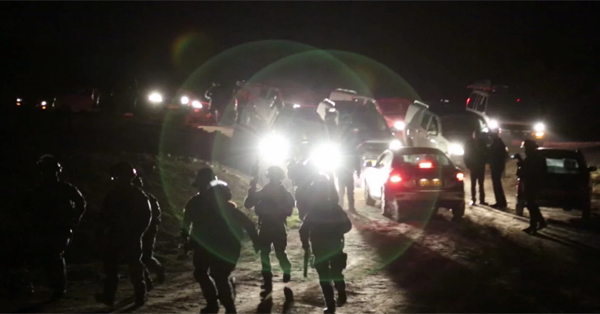 Quote of the day:
“If the Justice Ministry's department had related to the evidence like we do, they would have clearly seen that the police were responsible for the deaths of Abu al-Kiyan and Erez Levy, and for Odeh’s serious injuries. What we see is a persistent effort to manipulate the evidence, including the failure to provide evidence."
--Professor Eyal Weizman says new video footage categorically shows that it is the police who are responsible for the deaths of Bedouin resident Yakub Abu al-Kiyan and police officer Erez Levy and for the wounding of Arab lawmaker Ayman Odeh during the 2017 government eviction from and destruction of the Bedouin village of Umm al-Hiran - and that the police and the Justice Ministry could have reached that conclusion, as well.**

Election News Summary:
Israeli Prime Minister Binyamin Netanyahu won a victory when his candidate for state comptroller was elected by the Knesset - and Yedioth Hebrew reported that the Opposition wants to know who were the two opposition members who voted for him, and far right-wing MK Bezalel Smotrich called for Israel to be governed by biblical law - which Netanyahu rejected the idea and Israel Hayom reported that now Smotrich, whom MK Avigdor Lieberman called “a delusional hilltop boy,” has no chance of getting the job he coveted: Justice Minister - making top stories in today's Hebrew newspapers. (Interestingly, Israel Hayom did not report Smotrich’s controversial statement on its front page as all the other pages did, but focused on Netanyahu’s victory with the election of his choice of State Comptroller.)

Other Military and Diplomatic News:
Oddly the second Israeli airstrike in Syria in as many days did not make big waves in the newspaper (Yedioth did not even report on it), even though five people were reportedly killed. Maariv’s military correspondent, Tal Lev-Ram, called Israel’s two consecutive days of airstrikes “an exceptional response” to the two rockets launched from Syria that hit Mt. Hermon. Ynet reported that the attack on the airbase came only hours after an Iranian airline plane used by Revolutionary Guards to smuggle weapons to their allies in Tehran, landed there.

In other news, which didn’t make headlines: US Secretary of State Mike Pompeo told Jewish leaders in a closed conversation that US President Donald Trump's peace plan could be called ‘unexecutable,' The Palestinian Authority said Trump’s ‘deal of the century’ would eliminate the Palestinian cause, calling it ‘dangerous.’
“The Palestinian cause is being liquidated – no Jerusalem, no right of return for refugees, no sovereign state,” said a senior PA official. And Egyptian President Abdulfattah al-Sissi said Egypt won’t accept anything the Palestinians don't like. Then Trump’s son-in-law and senior adviser, Jared Kushner riled the Palestinians saying, “Palestinians deserve self-determination, but it was uncertain they can govern themselves.” Kushner also said that the US slashed Palestinian aid as a result of decisions by the Palestinian leadership.That has resulted in Palestinian classrooms swelling from 30 to 50 students, due to lack of funds following the US withdrawal of support for UNRWA.

Election Commentary/Analysis:
Not the Palestinians, the Economy or Even Netanyahu: Election Will Test Israel's Jewish Character (Ravit Hecht, Haaretz+) Far-right leader has unleashed a firestorm with his comments on Jewish theocracy, making September 17 much more than another referendum on Netanyahu's leadership.
I'm a former Netanyahu advisor voting for Liberman (Shai Bazak, Yedioth/Ynet) The Yisrael Beytenu leader alone has stood up to the ultra-Orthodox parties imposing their way on Israeli society, while the party of Netanyahu accepted their endless demands that put the country at risk of losing its liberal way of life.
The damage done (Dr. Haim Shine, Israel Hayom) If the Right hopes to win the coming election, it must put an end to the multiplicity of political parties and interests and present a united front. Now is the time to put egos aside.
Do not turn right: Kahol-Lavan can stop hiding its left-wing parts (Dr. Revital Amiran, Maariv) If the party of Lapid and Gantz wants to win the game, it has to find a unique field. It can be found in partnership with the Labor Party.
Right-wing leaders, do not betray your base (Dr. Eitan Orkibi, Israel Hayom) Any political framework that does not see all the parties to the right of the Likud unite ahead of the election will expose the nationalist camp to the same blow it endured following the last election. But this time, the blow will be fatal.
The right wing in Israel is in a deep crisis (Meron Rapoport, +972mag) Snap elections just weeks after Israelis went the polls are the result of a rivalry between Liberman and Netanyahu, but that’s just part of the story. The right is immersed in a crisis of identity, leadership, and politics.
Trump has a better handle on Israel than anyone (David Rosenberg, Haaretz+) The markets are making a big mistake in assuming it will be business as usual after the elections. The end of the Bibi era is going to leave Israel ‘messed up.’
"What's happening in Israel? It's terrible": The feeling of alienation among American Jews is getting worse (Shlomo Shamir, Maariv) The election crisis in Israel was greeted with shock among members of the Jewish American community who don’t know how to swallow this frog.