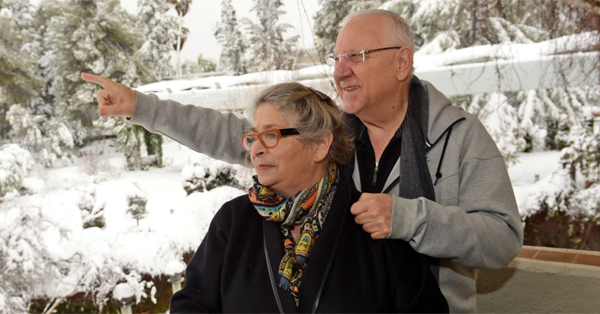 Quote of the day:
"Above all, she was the face of Israel as we wanted it to be, as it was supposed to be."
--Yedioth's senior political commentator, Nahum Barnea, writes about Nechama Rivlin, wife of the President, who passed away Wednesday.*

Top News Story:
Israel's prepared to part from its beloved first lady, Nechama Rivlin, who passed away Tuesday at the age of 73 after suffering from a lung condition for the past several years. The Israeli commentators could not help but compare her, subtly or outright, to the other first lady, Mrs. Sara Netanyahu. (See Commentary/Analysis below.)

Three years ago, Mrs. Rivlin wrote an Op-Ed published in Haaretz+ that eulogized her mother on International Women’s Day. She started it by saying, “It’s thanks to her that I look admiringly on all the pioneer women who came to Palestine-Eretz Israel in order to establish a state, which was only a dream when they arrived.” She ended the Op-Ed saying: “On this occasion I also salute the Arab women of my mother’s generation, who had a bond with the land and cultivated it, who raised their children with love, exactly like our mothers. Whenever I read a column by (Arab-Israeli columnist) Sayed Kashua about his mother, I think in my heart that it could have been written about my mother.”

Netanyahu, Suspect in Three Corruption Cases, Is Now Israel's Justice Minister
The premier fired Ayelet Shaked, who failed to pass the electoral threshold with her Hayamin Hehadash party leader, Naftali Bennett.
Democracy in Netanyahu's Israel Under Greater Threat Than in Trump's America, Warns Lawfare Editor - Benjamin Wittes, one of the most sought-after commentators on legal affairs in Trump-era America, says Benjamin Netanyahu could wreak a lot of damage on the legal system in a very short space of time

Elections 2019 Commentary/Analysis:
As Rivlin Mourns the Love of His Life, Liberal Israelis Pray He Retains the Strength She Gave Him to Confront Netanyahu (Chemi Shalev, Haaretz+)  Nechama Rivlin’s graceful tenure as first lady stood in stark contrast to the pathetically pretentious airs of the prime minister’s faux-royal family.
Smotrich and Lieberman have joined forces (Amnon Lord, Israel Hayom) Bezalel Smotrich is afraid of the serious attempts being made in recent days to unify the religious-nationalist camp, which is why he is helping Avigdor Lieberman stir the hornet's nest of religious-secular divisions.
Time to Unite the Left (Haaretz Editorial) The opportunity that has been created for a possible change in leadership, and to stop the right from moving ahead on extremist plans to annex territory in the West Bank and destroy the judiciary, makes it essential for supporters of peace and democracy to unify their ranks ahead of the September 17 election. At the very least they must prevent an unnecessary, dangerous squandering of votes for parties that fail to meet the minimum quota for getting into the Knesset, as happened to the smaller right-wing parties in the last election.
Netanyahu Might Need a War Before the Election (Zvi Bar'el, Haaretz+) The three months of waiting for the election is a dangerous period. Ostensibly we have a transitional government with limited authority, but it still has enough maneuver room to harm the country's stability and security. The conventional wisdom is that embarking on a war or a major military operation is risky for a leader’s political future. The saying that it’s easy to get into a war but harder to get out of one is especially true before an election. The thing is, the country is now run by someone whose only consideration is how to stay out of prison.
Russian-speaking Israelis: An untapped electoral treasure trove (Ariel Bolstein, Israel Hayom) Russian-speaking immigrants want to help shape the country's future and bear responsibility for its fate. The political entity that identifies this aspiration and truly integrates them will discover an electoral treasure trove; not just in the next election but for generations to come.
After standing bravely in the face of the ultra-Orthodox blackmail, Lieberman can for the jackpot (Menachem Ben, Maariv) After his heroism, Lieberman must turn to his natural reservoir of votes - and reap the fruits of his latest moves.
Why are Israeli liberals suddenly courting a far-right nationalist? (Edo Conrad, +972mag) Liberman’s political maneuvering may just bring about King Bibi’s downfall, but that doesn’t mean secular liberals should forget the reasons they opposed him all these years.
Kahol Lavan’s Mission (B. Michael, Haaretz+) There are growing calls for Yair Lapid to give up his rotation agreement with Benny Gantz. This is a wise and necessary demand. Firstly, the agreement was strange and unnecessary from the outset. Secondly, voters don’t like to choose half-leaders. Thirdly, Lapid’s proximity to the lofty seat is too difficult for Haredi lawmakers to accept and prevents any chances of launching a dialogue with them. But Lapid must give it up mainly because he’s about as deserving of the title of prime minister as that of NBA champion. For seven years he’s been in politics and it seems he has never succeeded in moving beyond the confines of groveling mediocrity. Lapid needs not only to give up on rotation but also one of the holy cows he has embraced: conscripting the ultra-Orthodox. It’s time to do away with the “equal burden” slogan.
More irresponsible separatism by the Right (Ariel Kahana, Israel Hayom) Despite statements about having learned their lesson, leaders of the unsuccessful right-wing parties are going to do the same thing in September that they did in April, putting both the right-wing camp and the nation as a whole at risk.

Other Top Commentary/Analysis:
Israel Needs More Real People Like the President's Late Wife Nechama Rivlin (Ravit Hecht, Haaretz+) When you saw Nechma and Ruvi together, you could believe that not everything in Israel had been wrecked, that all was not lost.
*Going back home (Nahum Barnea, Yedioth Hebrew) Nehama Rivlin's heart and mouth were equal. Who she loved and what she loved were without end. Those she despised the things she loathed, she despised without end. She was so genuine in her attitude to people, so direct, that those who loved her - and I was one of them - were concerned that the (diplomatic) restraint required of the wife of a president would make life difficult for her. We were wrong about her, of course. She was a wonderful first lady, a beam of light and warmth to all those who had a difficult life or circumstances and she was an example to all Israelis. Above all, she was the face of Israel as we wanted it to be, as it was supposed to be. Every high-ranking guest at the President's Residence, every head of state who hosted the President and his wife in his palace, immediately joined her, without ceremony. Her directness, so rare in a diplomatic and political environment, captivated every heart. She was born in one of the most rooted moshavim in the country, Herut in the Tel Mond area, from which she brought the love of the land, the vegetation, the flowering, and the knowledge of the land. A blooming tree spoke to her. Money did not speak to her, nor did gifts from strangers' money.
The bombing in Syria was meant to prevent an Gaza scenario in the Golan Heights (Tal Lev-Ram, Maariv) The unusual (strong) response to the rocket fire on the Israeli Mt. Hermon was intended to prevent the northern border from being transformed into another border of daily confrontation, such as on the Gaza border.
The Jews have never been ruled by Jewish law (Chen Sror Artzi, Yedioth/Ynet) Other than creating headlines for far-right MK Bezalel Smotrich, talk of Halacha a system of laws is unrealistic and undesired for most Israelis, for a Jewish and democratic state must aspire to values of equality and civil rights.
At Odds With Military, Netanyahu Uses Gaza Fishing Zone for Collective Punishment (Yaniv Kubovich, Haaretz+) In recent months, following border escalations, fishing has become a lever for pressure on Gaza residents, who rely on it as a major stable of the economy.
Russia has unexpected message for Iran on Syria (Alex Fishman, Yedioth/Ynet) The fight over control of strategic assets in Syria has gone up a notch after Russia expels pro-Iranian militias from Tartus port, ahead of Russian-American-Israeli summit over future of Syria and recognition of the regime by US, Israel in exchange for restricting Iranian activity in the country.

Interviews:
Israeli Arab Actor Finds Quiet, and a Booming Career, in Europe
Yousef Sweid, who in his latest role plays an Israeli army officer on a fictional soap opera, says that unlike Israel, in his new home in Berlin 'the political thing and my national identity are not the main subject.’ (Interviewed by Nirit Anderman in Haaretz+)