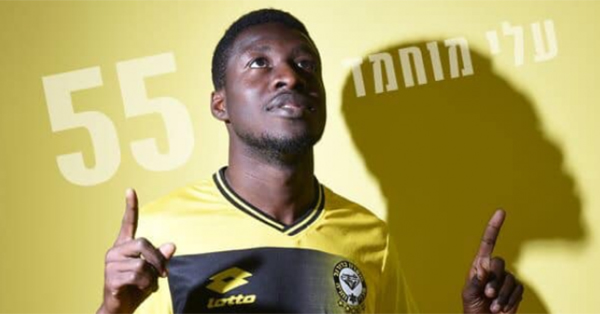 
You Must Be Kidding:
"Our problem is with his name only and not with the player himself. So we will change his name so that the name Mohammad will not be heard at Teddy Stadium."
—After discovering that the new acquisition to the Beitar Jerusalem soccer team was not a Muslim, the racist anti-Arab 'La Familia' fan club released a statement explaining it did not oppose the acquisition of the Nigerian - but they did have a problem with his name: Ali Mohammed. The post was later deleted.**
Front Page:
Haaretz
Yedioth Ahronoth
Maariv This Week (Hebrew links only)
Israel Hayom

At a joint press conference in Teheran, Germany's Foreign Minister Heiko Maas said “The situation in the region here is highly explosive and extremely serious” that could lead to military action, while Iran's Foreign Minister Mohammad Javad Zarif blamed the United States economic sanctions for the escalation, saying, "Reducing tension is only possible through stopping the economic war by America," in reference to additional US economic sanctions U.S. President Donald Trump signed on last month that affect 10 percent of Iran’s export economy. Zarif added that the US "cannot expect to stay safe" after launching tthis economic war. In response, Netanyahu accused Zarif of lying, saying, “Iran is the one who openly threatens annihilation.” Berlin, London and Paris are trying to salvage the nuclear deal and Germany said the European Union plan to bypass US sanctions on Iran will soon be operational. Meanwhile, US Commander Gen. Frank McKenzie said an expanded force may be needed in the Middle East to counter Iran. Nevertheless, Iran state TV announced that a U.S. resident held as spy will be released.

Features:
The letter Nehama did not have a chance to read
"Dear Mrs. Nehama, I wish you a quick recovery. I want to tell you that you are a uniquely special woman." This was the opening of the letter to the president's wife, Nechama Rivlin, who did not have time to read, and was signed by Dalal Daoud, an Arab-Israeli woman who has been imprisoned for 18 years for the murder of her abusive husband. During her many visits to the Neveh Tirza prison, Mrs.  Rivlin formed a personal and deep connection with Daoud. Shortly before Rivlin's death, the prisoner wrote to her in a moving letter: "Despite the difficulty, you gave us hope.” (Amir Alon, Yedioth Hebrew)
She's an American Citizen, but Israel Says She Can't Return Home to Bethlehem
Elaine Zoughbi’s crime is marrying a Palestinian 30 years ago and having four Palestinian children with him. (Amira Hass, Haaretz+)
More and more twelfth-graders are holding graduation proms like in America, and the costs are accordingly
The youth who graduate from high school do not settle for school parties, and hold for themselves a prestigious event costing hundreds and thousands of shekels, which only a few of the students can pay for. (Ofer Livnat, Maariv)
‘To sing is not a right in the Gaza Strip’
With mounting social and political restrictions under Hamas rule, musicians are struggling to develop their music careers in the strip. Many seek to leave in search of opportunities elsewhere. (Hind Khoudary, +972mag)
We Tried to Find a Picture of Netanyahu Reading Haaretz. This Is What We Found
On the occasion of 100 years to Haaretz, our reporter sent himself on a mission that seemed easy. A long journey followed. (Ofer Aderet, Haaretz+)

Commentary/Analysis:
The history of the right-wing proves that Likud's ability to function will be in doubt (Ephraim Ganor, Maariv) In all the cases in which right-wing governments fell or did not rise, it was because of the characteristic division that brought the Jewish people back to a time when it was composed of tribes.
With Annexation Comment, Friedman Just Made Netanyahu’s Life More Difficult (Anshel Pfeffer, Haaretz+) For years, the prime minister has cited U.S. pressure to stymie settlement-building in the West Bank. The American ambassador just took away that excuseץ
Israelis should not celebrate U.S. ambassador's talk of West Bank annexation (Ben-Dror Yemini, Yedioth/Ynet) Uniting all the territory to the east and west of the Jordan River is not contrary to Palestinian aspirations, it is what they want as the first step on the road to a binational state to replace the State of Israel.
True progressives are Zionists (Jonathan S. Tobin, Israel Hayom) Netanyahu’s opponents are counting on the conflict with the Palestinians being superseded in the public’s mind by the one with the ultra-Orthodox. Are they right?
The expected changes in EU institutions will probably benefit Israel (Zalman Shoval, Maariv) During the period of Theresa May as prime minister, Britain was generally sympathetic to Israel, and it is reasonable to assume that this will be the case even if it disengages from Europe.
ֿHezbollah's Propaganda War Threatens Israel Far More Than Its Missiles (David Daoud, Haaretz+) Fear is Hezbollah's most devastating weapon. And it's working: Hassan Nasrallah's extravagant threats, endlessly amplified by the Israeli media, now constrains IDF action against the Iranian proxy

Elections 2019 Commentary/Analysis:
Yair Lapid is the only guarantee that Kahol-Lavan will not sell our civil freedom (Menahem Ben, Maariv) The attempt to cancel the leadership rotation with Lapid will turn Kahol-Lavan into a party of generals who are pandering to ultra-Orthodox in the Labor Party style. It's good that Benny Gantz did not agree to it.
An Appointment Worth More Than All Pride Parades (Nave Dromi, Haaretz+) Amir Ohana is not just a gay man. Unlike other gay men, he chose the wrong side. A strange combination of gay and right-wing, which simply doesn’t make sense to liberals. That’s why he is reduced to being described as an “ass licker” or compared to Caligula’s horse.
Lieberman will not stop the deterioration of Israeli democracy (Dr. Revital Amiran, Maariv) The liberalism of the chairman of Yisrael Beiteinu contains an internal contradiction: The defense of secular freedom requires the preservation of fundamental principles of democracy, which he has no problem in helping to erode.
The greatest threat (Prof. Efraim Inbar, Israel Hayom) Given the ugly election campaign ahead of us, the party that emerges victorious should aspire to form as broad a coalition as possible. Likewise, the appointed government should act to fortify cohesion by adopting a sober public discourse and avoiding the demonization of political opponents.