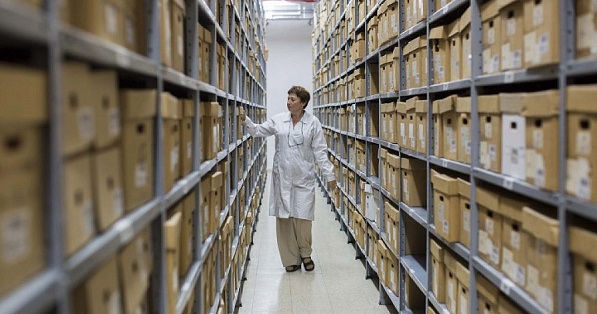 Revealed Exchange of the Day:
Lev Tov: “We’re talking about a population – women and children?”
Peled: “All, all. Yes.”
Lev Tov: “Don’t you distinguish between them?”
Peled: “The problem is very simple. The war is between two populations. They come out of their home.”
Lev Tov: “If the home exists, they have somewhere to return to?”
Peled: “It’s not armies yet, it’s gangs. We’re also actually gangs. We come out of the house and return to the house. They come out of the house and return to the house. It’s either their house or our house.”
Lev Tov: “Qualms belong to the more recent generation?”
Peled: “Yes, today. When I sit in an armchair here and think about what happened, all kinds of thoughts come to mind.”
Lev Tov: “Wasn’t that the case then?”
Peled: “Look, let me tell you something even less nice and cruel, about the big raid in Sasa [Palestinian village in Upper Galilee]. The goal was actually to deter them, to tell them, ‘Dear friends, the Palmach [the Haganah “shock troops”] can reach every place, you are not immune.’ That was the heart of the Arab settlement. But what did we do? My platoon blew up 20 homes with everything that was there.”
Lev Tov: “While people were sleeping there?”
Peled: “I suppose so. What happened there, we came, we entered the village, planted a bomb next to every house, and afterward Homesh blew on a trumpet, because we didn’t have radios, and that was the signal [for our forces] to leave. We’re running in reverse, the sappers stay, they pull, it’s all primitive. They light the fuse or pull the detonator and all those houses are gone.”
--A segment of an interview that a special Israeli unit, Malmab, decided to conceal from the interview that historian Boaz Lev Tov conducted with Maj. Gen. (res.) Elad Peled. An Israeli historian revealed that since early last decade, Israel's Defense Ministry teams have scoured local archives and removed troves of historic documents to conceal proof of the Nakba and that it was Israel's military operations against the local Arabs that caused them to flee - and not their leaders.*
Front Page:
Haaretz
Yedioth Ahronoth
Maariv This Week (Hebrew links only)
Israel Hayom


Top News Summary:
A man was suspected of setting fire to the home of a kindergarten owner, the latter who was charged today with child abuse, which, in the wake of the violent protests of the Ethiopian-Israelis,’ raised concerns that people were taking the law into their own hands, while leaders of the Ethiopian-Israelis’ protest warned that if the police officer who shot dead Solomon Teka, whose death sparked their protest, is not charged with murder the protests will be renewed, making top stories in the Hebrew newspapers, which also marked the fifth year anniversary of the 2014 Gaza War, ‘Operation Protective Edge.’

Also, five Israeli soldiers were lightly or moderately wounded when a Palestinian hit them with his car near a checkpoint late Saturday night. The military said it was deliberate and arrested the suspect and his father hours later. Ynet and Israel Hayom noted that the soldiers were busy examining something on the road between Hizmeh and Anatot checkpoints when it happened. Earlier Saturday night a Palestinian driver [allegedly - OH] tried to run over a policeman near Hazofim Square in the West Bank, Ynet reported. No one was hurt and the driver fled the scene. [NOTE: Even in cases when the Israeli security forces believe that the Palestinian driver mistakenly hit Israelis in the West Bank - usually in the dark - the Palestinians flee from the scene out of fear that they will be identified as ‘terrorists’ and be killed on the spot. - OH]


Elections 2019 News:
Ehud Barak Unveils the Name of His New Party - Former prime minister's party will be called 'Yisrael Democratit,' meaning democratic Israel. (Haaretz+)
Moshe Ya'alon: "Kahol-Lavan will not join any other party" - Former defense minister and chairman of the Telem party referred to Ehud Barak's entry into politics and the establishment of a unity government: "Only Gantz can replace the government." (Maariv)
'Women can do anything, even be prime minister' - Former Justice Minister Ayelet Shaked responds to religious Zionist rabbi's statement that no woman should ever serve as leader of a political party in Israel; Habayit Hayehudi stresses that women play an "important role" in political activity. (Israel Hayom)

Features:
*Burying the Nakba: How Israel Systematically Hides Evidence of 1948 Expulsion of Arabs
Since early last decade, Defense Ministry teams have scoured local archives and removed troves of historic documents to conceal proof of the Nakba. (Hagar Shezaf, Haaretz+)
Families of fallen lone soldiers follow their sons to Israel
Parents of Staff Sgts. Max Steinberg, Jordan Ben-Simon, and Sean Carmeli were overwhelmed by the tens of thousands of Israelis who attended their sons' funerals, and realized they would never have the same kind of support for their bereavement in the Diaspora. (Adi Hashmonai, Israel Hayom)
Gideon Levy: Abdallah, 15, Dreamed of Praying at Jerusalem's Al-Aqsa Mosque. He Was Shot Dead on His Way
The Palestinian teen's father dropped him off near the separation barrier, but Israeli Border Police shot him as he tried to pass through. (Gideon Levy, Haaretz+)

Elections 2019 Commentary/Analysis:
Netanyahu's Out of Luck, but He's Hoping a Photo-op With India's Modi Will Help (Yossi Verter, Haaretz+) Netanyahu is stuck between the Ethiopian community's protest and Gaza firebombs, and Lieberman is breathing down his neck. Can a strategic trip to India save him?
Barak put Jerusalem on the concession map (Nadav Shragai, Israel Hayom) Now, more than ever, is the time to remind people how, as Israel's 10th prime minister, Ehud Barak betrayed the trust of his constituents and Jerusalem.
The left insists on saving Netanyahu from his voters (Ben-Dror Yemini, Yedioth/Ynet) Likud voters are a diverse group, fearful of a binational state that would lose Israel's Jewish majority, critical of funds handed out to ultra-Orthodox parties to secure their support and accepting of many of the positions held by centrist parties.
Why Israel’s ultra-Orthodox Prefer the Right (Tomer Persico, Haaretz+) With members of the ultra-Orthodox parties constantly saying they’ll support Benjamin Netanyahu for prime minister, one would expect the notion of them as the ones who can tip the scales would fade, yet it stubbornly persists. It’s not clear, for example, how anyone can seriously argue that all Benny Gantz’s party needs to do to win the ultra-Orthodox seal of approval is to part ways with Yair Lapid, or that Ehud Barak is someone with whom the ultra-Orthodox could tango.
Ehud Barak intends to charge for the Russian vote (Anna Riva Barsky, Maariv) The former prime minister is building his political commando with his strategic adviser, Lior Horev. And also: the connection between the protest of Ethiopian immigrants, the police violence, the immigrants from the Soviet Union and the second round of elections.
A call for humility (Dr. Haim Shine, Israel Hayom) TThe Likud must act responsibly and not try to take votes from other right-wing parties. A demand for unity on the Right is inconsistent with an attempt to steal votes.
Why Kamala Harris and Ehud Barak are oceans apart yet strikingly the same (Chemi Shalev, Haaretz+) Both have emerged as the only candidates tough and sharp enough to confront Trump and Netanyahu head-on — and humiliate them in the process.
Trump Rolls Out the Big Guns for pro-Israel Evangelicals' Confab Ahead of 2020 (Amir Tibon, Haaretz) In a sign of evangelical voters’ importance to his campaign, the U.S. president is sending five senior advisers to a Christian pro-Israel gathering.

Interviews:
I Was Drafted to Clean Up Chernobyl – and Lived to Tell the Tale
Russian-born surgeon Michael Fishkin remembers how he was rudely awakened in the middle of the night and sent to Chernobyl to clean up the nuclear reactor after the 1986 explosion. (Interviewed by Ayelett Shani, Haaretz+)