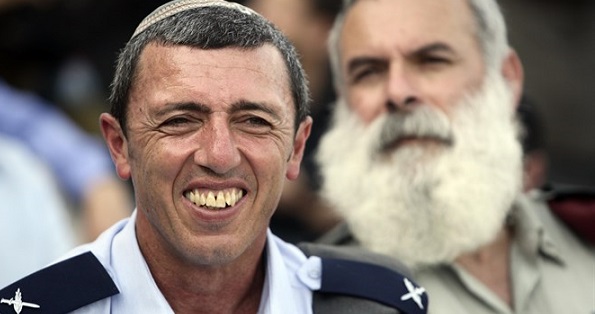 Quote of the day:
"It’s hard to decide what’s worse: the ignorance and shamelessness of Education Minister Rafi Peretz, who doesn’t hesitate to determine that a large group of citizens (LGBQT), supposedly with equal rights but who do not conform to rules he regards as the norm, is worthy of being sent for re-education (gay conversion therapy), or the evil and ignorance he demonstrates in his declaration that it’s time to completely take control over the Palestinians and their land while imposing apartheid and a denial of their most basic civil rights."
--Haaretz+ commentator Tzvia Greenfeld.writes in today's paper.*
Front Page:
Haaretz
Yedioth Ahronoth
Maariv This Week (Hebrew links only)
Israel Hayom

Top News Summary:
The Ethiopian-Israeli protest renewed in Jerusalem after the shooting police officer is being released today, Israeli Prime Minister Binyamin Netanyahu slammed the European Union after the letter decided not to impose sanctions on Iran, more nursery school teachers detained on suspicion of abuse, while government said it would not finish before school year starts to make criminal background check on all child day care employees, and an 11-year-old is in a mental health institute while the young boys who gang-raped her months ago have yet to be indicted - making top news in today’s Hebrew newspapers.

Netanyahu lashed out at European states for deciding yesterday that Iranian breaches of the nuclear deal by increasing its uranium enrichment were not 'significant non-compliance.’ Netanyahu compared their decision to Hitler’s rise, when “there were those who stuck their head in the sand and did not see the approaching danger.” Ahead of the meeting of EU foreign ministers, UK Foreign Secretary Jeremy Hunt said, “Iran is still a good year away from developing a nuclear bomb. There is still some closing, but small window to keep the deal alive.” Maariv reported that the US was ‘punishing’ Iranian Foreign Minister, Mohammed Zarif during his to the UN in New York: His movement were restricted to the six streets between the United Nations headquarters and the Iranian embassy: US Secretary of State Mike Pompeo: ”Our diplomats don’t move around freely in Tehran.”

After it was announced Monday that the off-duty cop who shot dead an Ethiopian teen was being released today from house arrest, Ethiopian-Israeli youth protested in Jerusalem, and seven were detained.


Elections 2019 Quickees:
Spelling trouble for Israel's Arab parties, announcement of joint run canceled
Two of four Arab-majority parties boycotted press conference on revived Joint List over a dispute on allocation of spots on joint ticket. (Haaretz+ and Times of Israel)
PM Netanyahu: "Lieberman tricked his (Russian immigrant) voters and did nothing for you"
In a meeting with 25 former Yisrael Beiteinu activists, Netanyahu warned: "Lieberman will go to government with Gantz, Lapid and Barak.” Yisrael Beiteinu: "It is good that he only remembers now the existence of immigrants from the former Soviet Union.” (Israel Hayom Hebrew)
A rapprochement between Labor and Meretz - The talks between Amir Peretz and Nitzan Horowitz are heated by internal polls commissioned by the two parties, both of whom show that running together increases their combined strength compared to running separately. Former senior Labor officials warn Amir Peretz: Stay away from Barak. (Yedioth Hebrew)
Israel's Labor source says it won’t merge with Barak’s party
'It’s clear that if there’s some kind of union, it will only be with [Labor leader] Amir Peretz leading it. There’s no question about it, we are unanimous. Barak’s leadership isn’t on the agenda,' the source said. (Haaretz+)
(Right-wing) Contacts in High-gear
The first meeting this week between representatives of Rafi Peretz and Ayelet Shaked and Naftali Bennett ended without agreement. Peretz's people fear that Shaked will move to the Likud as soon as possible. Her representatives replied that she did not intend to leave, and that a list headed by her would bring more seats. (Israel Hayom Hebrew)
"Tzipi Livni is a woman Israelis love or hate very much"
Dr. Ilan Ben-Ami wrote a biography of the most powerful woman in Israeli politics since the days of Golda Meir, explaining why she did not conquer the Prime Minister's Office. (Maariv)

Features:
The Bedouin Businesswoman Who Turned Her Tragedy Into Opportunity
After her son was diagnosed with a rare disorder, Jmalat Abu Musa established a now-thriving natural cosmetics firm out of her home. Today, she dreams of creating a workplace for mothers like herself. (Judy Maltz, Haaretz+)
Teen wounded by Gaza rocket as baby enlists to IDF's Elite Naval Commando
'It's a miracle that I'm alive and that I was able to get into the elite unit I've always dreamed of getting into,' says S., who suffered serious wounds from 147 shrapnel pieces in 2002, when a rocket launched from the Gaza Strip hit the back yard of his home. (Matan Tzuri, Yedioth/Ynet)

Commentary/Analysis:
By providing face-recognition software, Israeli high-tech is on the wrong side of justice (Amitai Ziv, Haaretz+) Unlike the employees of Google, who protested selling face-recognition technology, Israeli developers ignore their technology’s use in monitoring civilian populations.
Is Israeli apartheid fine as long as it's not homophobic? (Nahum Barnea, Yedioth/Ynet) Rabbi Rafi Peretz is a nice man, but he is also in possession of views far removed from mainstream Israeli society; and while his comments on 'conversion therapy' were justifiably condemned, not a peep was heard about his plan to annex the West Bank and deny Palestinians the right to vote.
A Question for Lea Tsemel (Amira Hass, Haaretz+) Why don’t the Palestinians boycott Israel’s military courts? That’s a question that arises after watching “Advocate,” the recent documentary about human rights lawyer Lea Tsemel. After 52 years, there is sufficient knowledge and understanding showing that what happens in the military courts is one big show of legality, protocols and fairness. Underneath the costumes is an apartheid regime that enforces military law against one population, which has no rights, and civilian law justice against the supreme nation. Why agree to be actors in a play that strengthens the image of the occupation as legitimate and normal?
Parks Must Be Open to All (Haaretz Editorial) The Nazareth District Court did the right thing when it made clear to the Afula municipality that closing the municipal park and charging entrance fees was illegal. While Judge Danny Sarfati did not address the claim that the city’s decision to close the park was an attempt to block residents of nearby Arab villages from visiting it, he stressed that “Even if the place was being closed solely to discriminate [in favor of] local residents, by law charging a fee to enter public parks is illegal.”  It’s forbidden for a private business like a café or a pub to prevent anyone from entering based on their religion, race, gender and so on. That being the case, why is the state stubbornly trying to permit this kind of discrimination to local authorities in a roundabout fashion? Public parks and green areas should be left accessible to all.
*A Clear and Present Danger (Tzvia Greenfield, Haaretz+) It’s hard to decide what’s worse: the ignorance and shamelessness of Education Minister Rafi Peretz, who doesn’t hesitate to determine that a large group of citizens, supposedly with equal rights but who do not conform to rules he regards as the norm, is worthy of being sent for re-education, or the evil and ignorance he demonstrates in his declaration that it’s time to completely take control over the Palestinians and their land while imposing apartheid and a denial of their most basic civil rights.
Appeasing Iran isn't an option (Prof. Eyal Zisser, Israel Hayom) It's possible the world is on a collision course with Iran, but by taking the initiative and adopting an uncompromising approach the breadth and scope of a future conflict can be mitigated and maybe even prevented entirely through deterrence.
Israel insists on misunderstanding Hamas (Dudu Elharar, Israel Hayom) Israel applies western thinking to the Gaza problem, and concludes that if only they had something to lose, they'd stop fighting. But Hamas doesn't want anything of its own – it wants what Israel has and is willing to pay for it in blood.

Elections 2019 Commentary/Analysis:
Something has broken with Netanyahu's charm, but there is still a chance that he will win the upcoming elections (Mami Peer, Maariv) Ehud Barak's chances do not seem great at present, unless there is a big bang of uniting political parties that will put him at its head. Amir Peretz should be taken seriously, too.
By boycotting Lieberman, the purist left cuts off its nose to spite its face (Chemi Shalev, Haaretz+) Fearless former defense minister has stymied Netanyahu and reshuffled Israeli politics.
The Russian front is warming up (Moran Azoulay, Yedioth Hebrew) The battle between Netanyahu and Lieberman over the vote of the immigrants from the Soviet Union goes up a gear. Focus: meetings with activists who recently defected (from Yisrael Beiteinu party), attempts to oust MK Roy Folkman (Kulanu) for an immigrant representative and recipcrocal stings.
Netanyahu's luck is that he has a good friend in the White House who is willing to do a lot to rescue him (Ephraim Ganor, Maariv) Scenario: The president of the United States extricates the State of Israel from a third election campaign within a year (and of course rescues his friend, the Prime Minister).