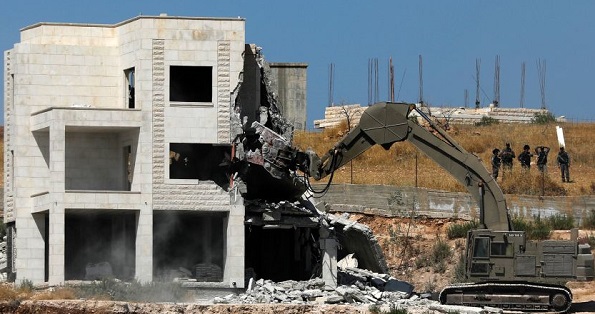 Quote of the day:
“You can demolish the building over our heads. Our whole lives are here. Where can we go?”
--Father at one of the 70 homes Israel demolished in Wadi Hummous, inside the Palestinian Territories, Monday.*
You Must Be Kidding:
16.
--The number of Jewish settler outposts established since 2017 inside the Palestinian Territories without authorization, according to the latest Peace Now report.*
Front Page:
Haaretz
Yedioth Ahronoth
Maariv This Week (Hebrew links only)
Israel Hayom


Top News Summary:
Yedioth and Maariv focused on the strike of the nurses  today and the death of a baby forgotten in a sweltering car, while Israel Hayom focused on Israeli politicians’ campaigning and strategizing, particularly regarding the likelihood that the three far right-wing parties will unite under the leadership of Ayelet Shaked. Interesting, was how Israel and the Hebrew newspapers dealt differently with both the demolition of Palestinian homes and 3 different rape cases.

SUR BAHER HOUSE DEMOLITIONS:
*Only Haaretz led with two unrelated and yet very related items: the Peace Now report that 16 Israeli settler outposts have been established in the West Bank since 2017 and the Israeli demolition of 70 Palestinian homes in an E. Jerusalem neighborhood under Palestinian control. No reporters from major Israelis newspapers, with the exception of Haaretz, interviewed the families whose homes were demolished yesterday in an unprecedented move by Israel. According to the Palestinians and Haaretz and the world powers, the 70 homes Israel demolished in the villae of Sur Baher are located in Area A - Palestinian civilian controlled area, for which Israel does not have a right to demolish homes. Israel said the buildings were too close to the Separation barrier it is building. The Palestinians long said that the wall was a means for Israel to make a ‘land grab.’ The other papers reported the enormous demolition as a technical and political story, publishing quotes from Israeli and Palestinian officials. Ynet called it a ‘mostly abandoned village,’ even though buildings there were under construction. MaarivOnline posted a video of an Israeli soldier and an Israeli policemen who filmed themselves watching and celebrating the demolition of a residential building and the sound of other Israeli security forces clapping and celebrating can be heard in the background. The report said that video has become viral and has stirred up a storm in Palestinian social media networks. Maariv reported that Israel demolished “13 illegal structures in Sur Baher” neighborhood in E. Jerusalem. It wrote that “This is an area between Area B and Area A.” [NOTE: There is no such thing. - OH] The demolition came after the High Court of Justice confirmed that there was no legal impediment, even though these structures were built many years ago, wrote MaarivOnline, adding that the “Palestinians fear that the demolition of homes and structures near the fence will set a precedent for other cities along the route of the barrier, which runs for hundreds of kilometers throughout and through the occupied West Bank.” A Jewish-Israeli activist journalist named A. Daniel Roth had spent the night with the Palestinian families and wrote about what happened when the security forces banged on the door. “Our whole lives are here. Where can we go?” asked one father. The European Union, the United Nations, and France condemned the demolition saying it was a violation of international law that undermines the two-state solution. Palestinian Authority President Mahmoud Abbas said it amounts to “ethnic cleansing" and “massacre.”

On the day that Israel destroyed those Palestinian homes, a Peace Now report revealed that at least 16 new Jewish settler outposts have been established in the West Bank since 2017 and a total of 31 outposts have been established from 2012 to 2019. Haaretz visited all of them over the past few weeks and reported that "Israeli authorities are turning a blind eye to the establishment of outposts that were built on state land” and at times even helping to retroactively legalize them. Shabtay Bendet, who heads the settlement monitoring team of Peace Now, said: “The two-faced conduct of the government of Israel with regard to illegal settlements continues at full pace…with the clear intention of thwarting a future agreement, and the aspiration to force on the Israeli public a messianic vision that most of the public opposes.”(Also Ynet and Israel Hayom)

RAPES:
The 12 Israeli youth being held and interrogated in Cyprus for the gang rape of a British tourist continues to be reported on, but not in the front pages. Interestingly, Yedioth Hebrew reported at length about the unprecedented court ruling yesterday that a Palestinian who raped a high-school girl in 2012 will have to pay her $1 million in compensation. The rapist is already serving his 25-year prison sentence. (See details below.) Alongside that article was a report that a court sentenced four Eritreans who gang raped an Israeli woman in 2015 to between 6-17 years in jail. But only five pages later, on page 12, is the latest report on the suspected gang rape of a British tourist by Israeli youths in Cyprus. Yedioth Hebrew reported that one of the suspects admitted erasing the video of the crime that was filmed on his phone and Cypriot investigators are trying to restore it. Yedioth also reported that the Israelis’ defense lawyers intend to hire private eyes to find information that sullies the young woman’s name in order to harm her version of the event. (Also Maariv) A previous claim that she had made a similar rape claim in the past to get money was disproven. The big news was that the Cypriot police are also planning on charging the suspects of conspiracy to commit a crime, which means that even if no DNA is found to connect some of the suspects to the act of the rape they are still in trouble for being there. Maariv quoted  the attorney for the two main suspects in the affair, Nir Yusslevitch, who said: "We conducted an investigation in order to confirm the versions of the suspects who continue to claim that they are innocent. I must note that the investigation is conducted professionally and thoroughly with the sincere intention of the investigators to arrive at the truth.”

“Making justice” (Yedioth Hebrew)
This was one of the most horrendous crimes in the history of the State of Israel. In 2012, at knifepoint, a Palestinian young man, Ahmed Bani Jaber, attacked a female high school student and her boyfriend in the bathroom in the underground parking at the Gan Ha'ir mall in Tel Aviv for almost two hours. ”The monstrous acts committed by the accused against the complainants are exceptional in every dimension and by any measure,” wrote the judges at the time. Jaber appealed to the High Court, and in 2014 it was decided to reduce his sentence from 30 to 25 years in prison. In May 2015, Maayan was recognized as a victim of hostilities who would receive raid from the National Insurance Institute. This recognition stemmed from Jaber's security background, the seriousness of the act and its irregularity, and based on various statements made by the rapist after the act, which implied that he had a nationalist motive for his actions. After the criminal verdict was handed down, Maayan decided to file a civil suit against the owners of the Gan Ha'ir parking lot, the security administrators of the parking lot, the State of Israel and against the rapist, Jaber. The prosecution against the parking lot owners, the security company and the state ended in a mediation process that included a monetary compensation that remained confidential. But a legal proceeding was conducted against Jaber, who did not even file a statement of defense. Now, seven years after the trauma that tore her world apart, the court accepted the rape victim's civil law suit and decided to rule in her favor for an unprecedented compensation of 3.7 million shekels. The horrors I suffered accompany me every day," she said yesterday. Maayan’s lawyer: ”We have strong evidence that the terrorist was brainwashed in the schools he studied at and through the Palestinian media, and we intend to file for 20 million shekels from the Palestinian Authority, which bears full responsibility for the anti-Semitic messages it spreads in the education system.”

Features:
“We train the snipers to hit the ankles”: A tour of the School for Counter-Terrorism
At the School for Counter-Terrorism in the Adam facility (in the West Bank), the professional authority to train the special units, they train the snipers to wound the rioters who are on the (Separation) fence, not to kill them. (Tal Lev-Ram, Maariv)
From the Israeli YAMAM (SWAT team), with love
The soldiers and commanders of the elite unit took a break from training to give cancer-stricken youths, aged 8-25,some fun. At a secret base, the youth were exposed to the operational capabilities of the YAMAM and held a joint shooting exercise with the soldiers. David Ben, 25, who immigrated from Honduras: "When you see all these things with your own eyes - you feel like going and training with them.” (Meir  Turgeman, Yedioth Hebrew)

Elections 2019 Commentary/Analysis:
On eve of existential election, Israel’s center-left is on the verge of implosion (Chemi Shalev, Haaretz+) Peretz's merger with center-rightist Levi-Abekasis has enraged Labor’s base and could consign it to the dustbin of history, much to Netanyahu’s delight.
Political reality will soon take the bloom off Shaked's return (Nahum Barnea, Yedioth/Ynet) The former justice minister and her New Right partner really belong in the Likud, but are forced to stay away because of the hatred of the Netanyahus; their attempts at unity with the nationalist-ultra-Orthodox crowd and its rabbis wasn't successful, nor was their solo attempt at Likud 2.0, and this is not likely to change.
Logic is not everything: the next stage in turning Shaked into the leader of the right (Prof. Arieh Eldad, Maariv) Mathematics is simple, but common sense and political rationale are not the only ones to play a role in this equation. Netanyahu was supposed to urge Rabbi Rafi Peretz to give up [the No. 1 slot on the united far-right-wing list -OH], but it appears he seems to be planning to do the opposite.
Amir Peretz's walk towards the social welfare flag could end in crushing the left (Dr. Revital Amiran, Maariv) Amir Peretz's engagement with Orly Levi-Abekasis is an example of how a worthy idea is sometimes the surest way to the underworld. It’s still not too late for Peretz to retract.
To defeat Netanyahu, last-minute unity must be foisted on surly center-left leaders (Chemi Shalev, Haaretz+) Only outside intervention can still compel them to discard petty arrogance for the sake of the Israel that they vowed to protect, as in the proposed list below.
It is worth recalling to Ehud Barak what the "Netanyahu state" he so despises is (Yossi Ahimeir, Maariv) This is not the state of one person. This is the state of the entire nation, with all its factions, which for the past 13 years in the aggregate has chosen to place Netanyahu at its head. And that says it all.
Prepared for APN by Orly Halpern, independent freelance journalist based in Jerusalem.