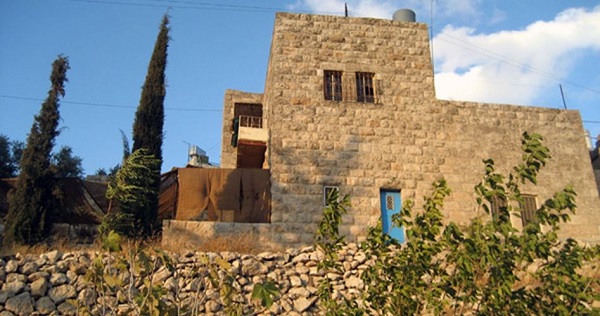 Quote of the day #1:
“Its name is a declaration that we aren’t hiding from that past. We’re acknowledging the history and clearly saying: This is our place, it belongs to us now, but we remember and respect what was here in the past.”
--Roni Gilat, a member of Kibbutz Zikim, where members decided that the beautiful and only Arab house in their midst would bear the name of the Arab family that built it a century ago.*
Quote of the day #2:
"The fact that he was found dead with David Grossman’s latest book says a lot about him. But even in this case the whole truth must be told. The reaction of the settlers was absolute false naïveté: How is it possible to kill such a good person, who only went to buy a book. A gift for his rabbis? This is nothing less than a war of the Sons of Light against the Sons of Darkness, against the angels of terror who harmed us only out of blind hatred. Esau is an enemy of Jacob. That is the Jewish destiny and we are the victims. As far as they’re concerned, there is no connection between the murder of the soldier and the occupation. They find no connection between the murder and the hopeless situation of the nearly 3 million Palestinians who are being crushed under the burden of the occupation of the Israel Defense Forces and the Shin Bet security service. The fact that there is almost no family in the West Bank that hasn’t experience death and humiliation and harassment, and people wounded and maimed after being shot by the security forces, makes no difference to them. They want it all. Both to settle on land that doesn’t belong to them, and to live in peace and quiet, every man under his vine and fig tree."
--Haaretz commentator Nehemia Shtrasler wrote in an Op-Ed about the settler reactions to the Palestinian killing of Israeli soldier Dvir Sorek in the West Bank.**
Front Page:
Haaretz
Yedioth Ahronoth
Maariv This Week (Hebrew links only)
Israel Hayom

Top News Summary:
Today’s top stories were connected to Israeli Prime Minister Binyamin Netanyahu and the wielding of his strength. Transportation Minister Bezalel Smotrich, who blasted Netanyahu as ‘weak’ and with ‘zero leadership’ the day before, apologized yesterday for his comments and Matanyahu Engelman, the Likud choice for State Comptroller, has changed the Permits Committee by appointing eight new members, making it more populist and more supportive of Netanyahu.
Also making headlines were blasts reported in a weapons arsenal in Baghdad that was used by an Iran-backed militia. No one took responsibility for the attack.

Israel Navy, NATO Forces Conduct Exercise Simulating High-casualty Earthquake - The navies of nine other countries participated in the drill, on the understanding that Israel would need to bring relief assistance in by sea. (Haaretz+, Maariv+VIDEO Ynet)
Israel Prepares to Demolish Homes of Palestinian Suspects in Soldier's Murder - Cousins Nseir Asafra and Kassem Asafra were arrested on Saturday in Beit Kahil, northwest of Hebron. Investigation reinforces assessment that suspects acted independently. (Haaretz+)
Israeli Army Scraps Training for Reservists Due to Budget Cuts - Reasons given for the slashes include new preparations for a Gaza war, a lack of government and the chief of staff's budgeting, but high-ranking reservists warn that these cuts may have consequences in the next battle. (Haaretz+)
Budget Cuts May Leave Thousands of Special-needs Kids Without Appropriate Schooling in Israel - With a $140.6 million budget shortfall, some 350 new classes to accommodate special-needs children will not be opened, in addition to cuts on the number of assistants, therapists and teaching hours. (Haaretz+)
Israeli Man Indicted in Rape, Sexual Abuse of 45 Underage Girls - The 26-year-old resident of an ultra-Orthodox settlement allegedly used false identities to contact girls over the internet. (Haaretz+)
Israeli Court Rules to Place Limit on Amount of Water Pumped From Dead Sea - Environmental group files petition against Dead Sea Works requesting the company obtain licences to promote more efficient and economical pumping technologies. (Haaretz+)
Muslims in Israel make up 18% of Israelis, a decline in population growth - The CBS released data on the Muslim population on the occasion of the Eid al-Adha holiday: A third are children up to the age of 14 - higher than other religions, lower rates of matriculation exams and earlier marriages. (Maariv)
Geneva prosecutors indict Israeli billionaire Steinmetz in Guinea corruption case - Steinmetz and two associates are accused of paying bribes linked to the allocation of mining licences between 2005 and 2010. (Agencies, Haaretz)
Israeli village excavates itself, finds biggest winery in the Crusader world - King Baldwin III built a castle in Mi’ilya from which he ruled his Galilean lordship in the 12th century. Watching it crumble before their eyes, latter-day villagers teamed up to find the treasures buried beneath their very own homes. (Haaretz+)
PA money woes make tense Eid al-Adha for West Bank Palestinians - Abbas' refusal to accept tax revenue from Israel is taking its toll on the local economy as civil servants see wages cut in half and even the annual festival devoted to food is failing to make an impact; 'our financial situation is tough, we are under siege from all directions,' says Hebron livestock merchant. (Ynet)
Turkey Says U.S. Delegation Begins Work on Syria Safe Zone - Ankara seeks to push out U.S.-allied Syrian Kurdish militias from border areas inside Syria, considering them terrorists aligned with a Kurdish insurgency in Turkey. (Agencies, Haaretz)


Features:
*In Makeover Project, Israeli Kibbutz Preserves Its Palestinian 'Roots'
Kibbutz Zikim renovated and repurposed 100-year-old Beit Alami – named after the Arab family who lived there until 1947 – but retained the building's name for its new visitors center. (Moshe Gilad, Haaretz+)

Elections 2019 Commentary/Analysis:
The solution to the crisis experienced by the political system is the establishment of a national emergency government (Ephraim Ganor, Maariv) Recent political developments reinforce the feeling that the prospect of forming a government after the upcoming elections according to the expected distribution of mandates is zero.
The only political alliance in Israel still fighting the occupation is 99 percent Arab - and this Zionist is voting for it (Larry Derfner, Haaretz+) Israel's left-wing Zionist politicians won't challenge the occupation this election: They don't want to scare away the voters. So I'm voting for a slate that does - despite the militant anti-Israel antagonism of one of its factions.
The current government is going to elections with a certificate of achievement (Yossi Ahimeir, Maariv) Tel-Aviv is a paradise for young people and tourists, free of inhibitions, eating and drinking, as in any major European city free of worries. A city that is a a bubble of the young, real Israel.

Interviews:
Finding strength after the murder of her grandchild
Esther Schlesinger survived losing her family in the Holocaust, being shot in the head by the Nazis and rescued from a pile of dead bodies, but losing her grandson - 18-year-old Dvir Sorek who was stabbed to death last week in a terror attack - was one of the worst experiences of her life. (Interviewed by Elisha Ben Kimon in Yedioth/Ynet)