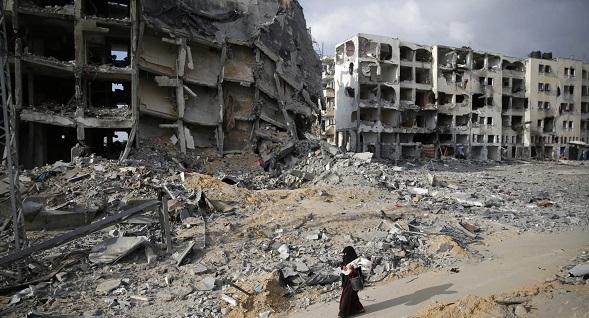 Quote of the day:
"Save us from the stale argument that the solution only passes through the gun barrel."
--Yedioth commentator Ariella Ringel-Hoffman derides the politicians calling for a third Gaza War instead of improving the lives of Gazans.*
You Must Be Kidding:
"There is a common denominator between those who want to separate from the Palestinians and perpetrators of terrorist attacks."
--Former IDF commander Gen. (res.) Gershon HaCohen likened the Israeli left to militant Palestinian organizations, saying that they both wanted to prevent coexistence of Jews and Arabs in the West Bank.**
Front Page:
Haaretz
Yedioth Ahronoth
Maariv This Week

Top News Summary:
Kahol-Lavan leader Benny Gantz kept his party co-leaders in the dark about probe of leak, Israeli Prime Minister Binyamin Netanyahu flew to Ukraine (some say to get Russian-Israeli votes) as the situation with Gaza escalates and warnings come from Gaza and the West Bank that the situation in both parts of the Palestinian Territories is near boiling point, making top stories in today’s Hebrew newspapers.

After an IDF helicopter and tank fired at and killed three Palestinians on the Gaza border late Saturday night, the Palestinian factions in Gaza issued a joint statement warning Israel that Gaza is a ‘volcano about to erupt.’ And earlier, Hamas sources said that recent attempts by Palestinians to breach the border with Israel reflected the "urges" among its members in the Gaza Strip and were not carried out at the terrorist group's orders or authorized by the Hamas leadership, but were acts due to the humanitarian crisis plaguing the Strip, alongside "Israeli aggression" in the West Bank and Jerusalem, and the "repeated infiltration" of Al-Aqsa Mosque,” which is what led to the firing of rockets at Israel on Friday. Netanyahu said that Israel was prepared to launch another military campaign on Gaza - even during elections, while opposition politicians blasted Netanyahu as ‘weak.’ But Israeli analysts thought the IDF and Netanyahu’s policy of not reacting was wise. (See Commentary/Analysis below.)

Meanwhile, Yedioth/Ynet’s Palestinian affairs reporter, Elior Levy, got exclusive access to a classified intelligence report recently written for the heads of the Palestinian security forces. The report warns of increasing Palestinian attacks in the West Bank and a mass outbreak of violence due to the political stalemate, the feeling of international isolation, the poor economic situation and the deepening sense of rage among young Palestinians, who see no hope for change in the near future. (Also Yedioth Hebrew)

The bruhaha over the secret hiring by Kahol-Lavan co-leader, Benny Gantz, of private investigators to find the ‘mole’ who keeps leaking information from the party has made the other leaders in the party not too happy. But Gantz insisted that "There weren’t and there won’t be splits in Kahol-Lavan party.” (Maariv) Meanwhile, Netanyahu flew to the Ukraine for a two-day visit making it the first time an Israeli prime minister has visited the country in 20 years. While the official purpose is political, most commentators think was meant to try to take votes from Avigdor Lieberman’s party. (Also Yedioth Hebrew)

Elections 2019 Commentary/Analysis:
Where Are You Going, Gantz? (Raviv Drucker, Haaretz+)
Benny Gantz has been making a great effort these past few weeks to sprout leadership wings, to rise above the neutering four-member “cockpit.” He publicly chastised Yair Lapid for his campaign video that offended the ultra-Orthodox, announced during a tour of the Jordan Valley that the area will remain under Israeli control forever, and declared to Ynet that if Netanyahu were ready to give him first turn as prime minister in a rotation agreement, there might be something to talk about. Even his move to seek out those leaking information within Kahol Lavan, without telling his co-leaders, was meant to demonstrate leadership.
We must not put all the left-center bloc mandates into one big fashion party (Hilik Bar, Maariv) My friends in the center-left camp, do not repeat the mistake we made in the previous election and give your hand and voice to another political party in the center that is in fashion, and whose expiry date already exists.
Israel's Arab Parties Join Forces, but Their Union Lacks a Message (Odeh Bisharat, Haaretz+) Without vision, the battle is lost. The apple, according to Amos Oz in his last book, is made of water, earth, sunlight, an apple tree and a bit of manure. However, while it is made out of these ingredients, it doesn’t resemble them. That appears to sum up the story of the Joint List in one bite. The partnership includes all the ingredients, but its spirit is floating elsewhere.
Without Trump and Putin, Netanyahu Makes Do With Ukraine Campaign Stop (Anshel Pfeffer, Haaretz+) Ukraine and India aren’t the United States and Russia – and in visiting Kiev, Netanyahu is walking a diplomatic mine field.
Prepared for APN by Orly Halpern, independent freelance journalist based in Jerusalem.
comments powered by Disqus