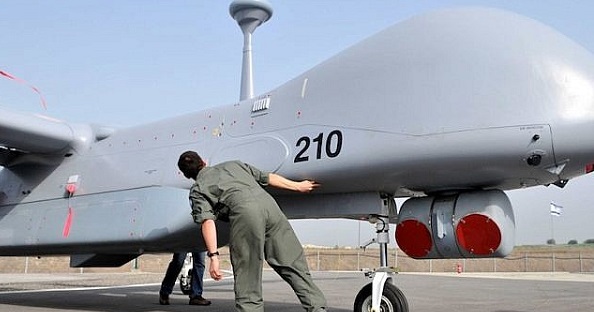 Quote of the day:
"Fifty-two years have passed since the Six-Day War, and the two populations are intertwined. The future of Hadassah Hospital depends on Palestinian export duties, the West Bank cannot continue to exist without Israeli foodstuffs, and we cannot manage without the hundreds of thousands of Palestinians who work in Israel."
--Former Israeli peace negotiator and politician, Yossi Beilin.*

Following the promise by Hezbollah chief Hassan Nasrallah that Israeli soldiers will pay for Israel military attacks - one of which killed two Hezbollah militiamen in Syria late Saturday night and the other in which two ‘suicide drones crashed in a Hezbollah neighborhood of Beirut a few hours later - Israel went on alert, limiting traffic along the northern border out of fear of an impending retaliation. Israeli Prime Minister Binyamin Netanyahu also threatened to harm Lebanon if Hezbollah takes responded. Interestingly, Yedioth gave a sort of ‘Israel Hayom’ version of the threats by leading with Netanyahu’s “warning to Hezbollah.’ However, Haaretz and Maariv thought that Hezbollah’s threat, which all the papers reported was being taken very seriously by the Israeli security services, was the more important story. (See also Commentary/Analysis below.)

Nasrallah was not the only one who got angry. Lebanese President Michel Aoun denounced both as “a declaration of war." And in Iraq, a powerful political bloc in the Iraqi parliament also called the air strikes in Iraq ‘a declaration of war,’ and the President and Prime Minister said they were an ‘attack on Iraq’s sovereignty.’

All in all, four attacks were perpetrated between late Saturday night and early Monday morning, two in Lebanon, one in Syria and one in Iraq and all attributed to Israel, one of which Israel took responsibility for.

TIMELINE:
1.) Late Saturday night Syria, Israel’s air force struck a building in Aqraba, Syria, southeast of Damascus, from which an Iranian drone attack was reportedly slated to be launched. Two Hezbollah people were killed. Unusually, both the IDF spokesman and Prime Minister Binyamin Netanyahu issued statements about Israel being responsible, thereby breaking - again - Israel’s policy of ambiguity regarding attacks abroad.
2.) Early Sunday in Beirut, two drones crashed into Beirut’s Dahiyyeh neighborhood - a Hezbollah part of town. They were reportedly carrying 5.5 kilograms (12 pounds) of C4 explosives. In his speech, Nasrallah warned Israeli soldiers at the border to "await our response” and added: "I am telling Israeli residents on the northern border, do not believe your government that you are safe – you are not."
3.) Sunday afternoon on the Iraq-Syria border, near the Abu Kamal border crossing. A drone reportedly struck a convoy on the Iraqi side of the border that included Shi’ite militia commanders. Iraqi reports said nine people were killed. [NOTE: Iraq reopened the border crossing just three weeks ago after being closed for over eight years. - OH]
4.) Early Monday morning, eastern Lebanon:  Israeli warplanes attacked a base of the Syrian-backed group known as the Popular Front for the Liberation of Palestine.

And while Israeli media reported that Israeli residents along the northern border were not fazed, residents of the Gaza periphery were very upset about the reality there, particularly after some 4000 people attending an outdoor music festival Sunday heard rockets launched from nearby Gaza. (video) "This horror film is part of our lives," residents said (Maariv). Two of the rockets were intercepted, while a third landed in an open area, sparking a fire but causing no damage or injuries. Hamas denied responsibility. Interestingly, although Israel attacked two Hamas military targets in response, the IDF blamed Islamic Jihad for the rocket fire. Appealing to Gazans, the Israeli military claimed that that Islamic Jihad is doing the dirty work for the Iranians at the expense of the enclave population's well-being and security. Also Monday, Netanyahu slashed Gaza fuel imports in half.

Amid the tension on five fronts (Iraq, Syria, Lebanon, Gaza and West Bank) Netanyahu invited the leader of the opposition party, Benny Gantz, to a security briefing. Netanyahu was absent from the debriefing.

Elections 2019 Commentary/Analysis:
Labor’s Peretz sacrifices mustache to atone for sabotaging his own revolution (Chemi Shalev, Haaretz+) Peretz’s prevarication on Netanyahu overshadowed his just protest against Israel’s deteriorating social services.
Peretz's mustache stunt will come back to bite him (Einav Schiff, Yedioth/Ynet) Labor chairman's public removal of his iconic mustache to stifle rumors about his negotiating a deal with Netanyahu is one of saddest things seen on TV in recent years.
Labor leader loses trademark mustache, but election could cost him much more (Yossi Verter, Haaretz+) What the heck was Channel 12 News thinking when it gave in to a base PR trick by desperate mustache-less Labor-Gesher leader, Amir Peretz?
Despite the dormant election campaign, deep currents are taking place beneath the surface (Dr. Revital Amiran, Maariv) Ayman Odeh, Ehud Barak and Benny Gantz mark the beginning of an important change in Israel's democratic and political horizon.
Arab Israeli Leader Should Take Things Step by Step (Tzvia Greenfield, Haaretz+) The leader of the Arab parties’ Joint List, MK Ayman Odeh, has stated that he would consider recommending Kahol Lavan leader Benny Gantz as the next prime minister and might even join a center-left government under certain conditions – including ending the occupation, repealing the nation-state law and revoking demolition orders and bans on Arab construction. This shows that the Arab political leadership is undergoing an important process of sobering up. But this process still intersects with reality only to a limited degree. To end the occupation, it’s first necessary to replace the government. But if the Joint List demands a priori that Kahol Lavan announce policies that would make it very hard, perhaps even impossible, to replace the right-wing government with a saner, more moderate one, what will these wise men have achieved through their demands?