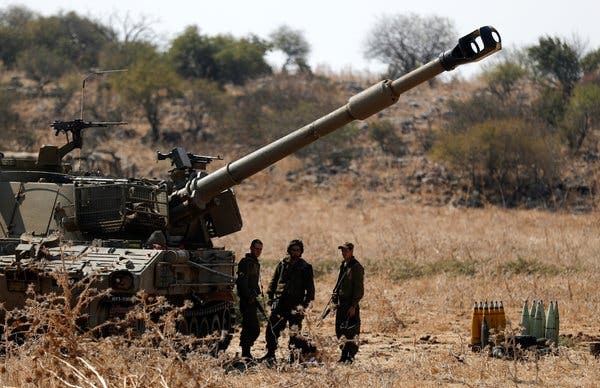 Quote of the day:
"There is no escape from seeing things as they are: the Israeli free press is under a dangerous attack."
--Senior political commentator of Yedioth Ahronoth, Nahum Barnea, writes in a front-page Op-Ed about Prime Minister Binyamin Netanyahu's accusations against journalists and institutions of the Israeli media and about Netanyahu's call to boycott Channel 12 News.*


Top News Summary:
Celebrations, preparations and accusations were today’s top stories in the Hebrew newspapers: the celebration of the first day of school, the preparations for a possible war on the border with Lebanon and the accusations by Israeli Prime Minister Binyamin Netanyahu against journalists.

Hezbollah leader Sheikh Hassan Nasrallah said Hezbollah would retaliate against Israel for the latter’s drone attacks in Beirut, which, he said, “open the door to assassinations" if left unanswered, and Israel bolstered the northern border with more tanks and artillery, opened bomb shelters and closed off roads. Days after the drone attack that took place a week ago, the IDF said that Hezbollah has an Iranian-backed precision-guided missile project, which Hezbollah denied. The media reported that the drones hit vital equipment. Hezbollah said the drones were likely flown from Israeli gunboats.

Elections 2019 Top News and Quickees:
With the blatant exception of ‘Israel Hayom,’ the Israeli newspapers were very concerned by Netanyahu’s declaration that the media was putting him on a ‘field trial,’ by calling senior journalist Guy Peleg of Channel 12 News, who nightly had been exposing information leaked from the corruption cases against Netanyahu, a ‘puppet,’ (Peleg now has a personal bodyguard), for calling for a boycott of Channel 12 and for calling ‘Our Boys,’ the Israeli produced and directed HBO film series that is being broadcast on Channel 12, “anti-Semitic," and for lashing out at Keshet, its production company. Israel Hayom, instead, focused on Netanyahu’s concerns that the Likud party was losing strength in polls against Kahol-Lavan, which had two more mandates than Likud in a recent poll.

Features:
This Place Is Only for Jews': The West Bank's Apartheid Springs (Gideon Levy, Haaretz+) Settlers have taken over dozens of springs in the West Bank, all of them on private Palestinian land, and are keeping the owners away. Rina Shnerb, a Jewish teen, was murdered last week at one of them.

Commentary/Analysis:
Hamas takes extraordinary step to quell Gaza's 'angry youth' (Amos Harel, Haaretz+) Rare Islamic fatwa aims to put an end to independent actions against Israel.
There is no magic solution for the Gaza Strip (Michael Milshtein, Yedioth/Ynet) Five years have passed since the 2014 Israel-Gaza conflict, and it seems like another war is on the horizon; there are steps Israel can take in the short term, but its long-term strategy is far more important.
On its way to change power relations in the Gaza Strip, Islamic Jihad is also slaughtering Hamas policemen (Jacky Khougy, Maariv) Attempts to penetrate Israel and the shooting at Sderot are part of Jihad's effort to upgrade its status in Gaza. Israel and Hamas remain indifferent, together and alone.
Closer to the brink than ever (Yoav Limor, Israel Hayom) After hits on major Hezbollah targets, Israel is readying itself for a response, which Sheikh Hassan Nasrallah must calculate very carefully to avoid sliding into an all-out war, which he does not want.
First Drone War Pulls Israel's Conflict With Iran Out of the Shadows (Amos Harel, Haaretz+) A battle over optics also being waged: Nasrallah paints Beirut targets as marginal, while Israel makes effort to expose the Hezbollah precision-missile project. What happened to Israel's promise on China?
The right-wing has never had any solution to the Palestinian issue (Dr. Arnon Degani, Ynet) Almost a decade before the Six-Day War erupted, a naïve high schooler wondered what Israel would do with millions of Arabs it would potentially annex into its midst; Begin had no answer then and his political successors have no answer today.
The IDF Is the World’s Biggest Jewish Organization — but Should Be for Israelis Only (Anshel Pfeffer, Haaretz+) Allowing the Israeli army to be a draw for young foreign Jews is building the connection between Israel and the Diaspora on very problematic and narrow foundations.
A new existential challenge (Maj. Gen. (res.) Gershon Hacohen, Israel Hayom) The growing threat posed by the "war of attrition" that Iran, Hezbollah, and Hamas are now fighting against Israel is aimed at curbing Israel's prosperity. This growing threat is gnawing at the Jewish people's hopes for a safe and thriving homeland.
Germany is no place for Jews (Zeev Avrahami, Ynet) In their desire to free themselves from inherited guilt over the Holocaust and the mass slaughter of the Jewish communities in Europe, Germans have adopted a vicious anti-Israel stance that Israelis in the country must adopt if they want to fit in.
Israel's Ethnic Cleansing Continues (Ilana Hammerman, Haaretz+) No more occupation? No, that slogan has become hollow. Write it in your opinion pieces, scream it at demonstrations. Apartheid? Yes, that’s the right term to define the situation in the West Bank. But quashing this apartheid is a far cry because the military and political-power balance binds the hands of those who want to destroy it, both here and around the world.
Puncturing the big lie of Palestinian identity (Melanie Phillips, Israel Hayom) The Palestinians' claim that they are the rightful inheritors of the land represents one of the most successful, if fiendish, propaganda achievements ever to have been pulled off – to have persuaded millions of people that this ludicrous falsehood is an unchallengeable truth.
I embrace my Israeli Arab identity (Ali Adi, Israel Hayom) I would like to feel the same pride in my Arab culture and traditions that I feel as an Israeli.
It's time for Arabs to hold governmental posts in Israel (Riad Kabha, Yedioth/Ynet) Ayman Odeh voices a growing Arab desire to be a part of a center-left government, and with power will come great responsibility and sense belonging; but will Jewish leaders dare to be as courageous and strive for real co-existence?
Iran, Yemen and Two More Bleeding Fronts Awaiting Trump's Next Tweet (Zvi Bar'el, Haaretz+) Washington has become the most threatening front for Israel amid reports the United States is prepared to negotiate with Iran.
EU's product labeling is skewed (Yisrael Medad, Israel Hayom) Why would “Judea and Samaria” on a label not suffice? After all, those names are the historical terms. “Judea” is in the New Testament so it’s not just a Jewish thing.
Israel's Jews should meet Arab outreach with an open hand (Ben-Dror Yemini, Yedioth/Ynet) Ayman Odeh's comments on the possibility of the Joint List joining a center-left coalition have stirred some controversy among his political allies, but they actually make more sense than it seems at first glance, as 87% of Arabs would like the party to be in the coalition.
Is Pakistan Preparing to Recognize Israel? (Kunwar Khuldune Shahid, Haaretz+) Prime Minister Imran Khan and his military backers are giving unprecedented freedom to a highly-censored media to talk about establishing relations with Israel. 14 years to the day since the countries' only public bilateral meeting, are conditions now ripe for a formal move?
DNA Testing to 'Prove' Jewishness Is Spine-chilling (Haaretz Editorial) Over the past year the rabbinical courts began proposing that individuals in the process of “clarifying their Jewish states” undergo genetic testing: specifically of mitochondrial DNA, which is inherited from the mother. Dozens of Israelis have undergone the test in the past year, and it has helped about two-thirds of those whose Judaism had been in doubt. In Israel, which grants citizenship according to bloodlines only; where a person’s Jewishness has legal significance that affects the right to immigrate and to obtain citizenship, as well as affecting personal status and even the right to buy property, the thought of making DNA testing part of the process of determining Jewishness according to religious law is spine-chilling. No door should be opened for Israel to become a country where entry and citizenship will someday depend on a genetic test.