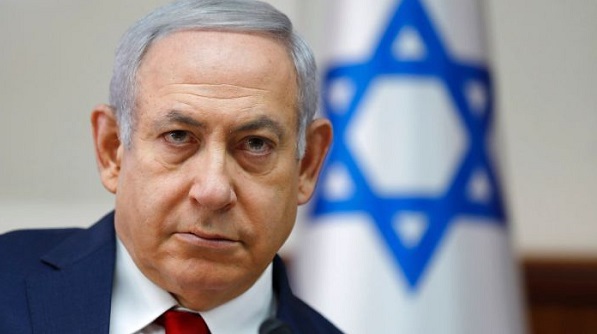 Quotes of the day:
"We won't let them steal the election."
--Israeli Prime Minister Binyamin Netanyahu says speaking of his party's attempt to pass a bill to place cameras at polling stations to prevent alleged fake votes in Arab sector.*

"Advancing the bill, even though it has no chance, is meant to keep the narrative of 'Arabs stealing the vote' in the minds of Likud voters. This will get them to go out and vote."
--A source within Likud told Maariv.*
Front Page:
Haaretz
Yedioth Ahronoth
Maariv This Week (Hebrew links only)
Israel Hayom

Top News Summary:
All of today’s big stories had an election edge to them, whether it was the State Comptroller’s decision to let Israeli Prime Minister Binyamin Netanyahu receive a loan from a rich friend for his legal defense in the corruption cases or his visit to Hebron where he pledged to “stay in Hebron forever” or his snap decision to fly today to Britain to meet with the British Prime Minister and the US Secretary of Defense, not to mention the Attorney General’s statement that he opposes the Likud party’s intention to pass a bill allowing cameras place in polling stations. The other big story was the New York Times expose on Israel’s former plans to bomb the Iranian nuclear reactor and how former US president Barack Obama stopped it. Maariv took a different slant on the story than the other papers, with the headline: “This is how Obama thwarted the Israeli attack on the reactor in Iran.” Yedioth, Haaretz+ and Israel Hayom’s title emphasized “how close Israel came” to attacking and quoted Netanyahu in the sub-title: “If I had had a majority, I would have done it, unequivocally.”

Also, Yedioth reported that five people had to pay compensation to a man who expressed his political opinion on his personal Facebook page that angered them so they wrote bad things about his work on his business page, pretending to be his clients. (See Features below.)

Today Kahol-Lavan Chairman, Benny Gantz, slammed the new state comptroller, Matanyahu Englman, for giving Netanyahu permission to receive a loan from a tycoon for his legal defense. Gantz accused the State Comptroller of “working for Netanyahu, to which the Likud responded that Gantz had “crossed a red line in attacking a senior gatekeeper" and that the Likud would not sit with him a coalition government. (Maariv)

**Meanwhile, Israel's Attorney General Avichai Mendelblitt said the Likud cannot legally pass a bill to film at polling stations. Netanyahu said his party will continue legislating the bill. "We won't let them steal the election." Netanyahu has accused the Arab citizens of fake votes. Haaretz+ reported that a Likud source said that "advancing the bill, even though it has no chance, is meant to keep the narrative of 'Arabs stealing the vote' in the minds of Likud voters. This will get them to go out and vote.” LIkud is trailing Kahol-Lavan in a recent poll. (Also Maariv and Ynet Hebrew) Today, Thursday, Elections Committee Chair, Justice Hanan Melcer, called on MKs not to push for legislation to install cameras in polling stations and to respect the Attorney General’s position, saying that 'lately they haven't been listening to him.’

There were questions about whether Netanyahu would attend the 90 year memorial event in Hebron for Jews murdered there in the 1929 Arab Riots and the papers said he was under political pressure from the settlers. Netanyahu indeed attended and pledged that Israel will “stay in Hebron forever.” Soon after Knesset Speaker Yuli Edelstein and Culture Minister Miri Regev, both Likud, called for annexation of the West Bank and encouraging more Jewish settlement in the city.

Today Netanyahu set out for an impromptu visit with British Prime Minister Boris Johnson and U.S. Secretary of Defense Mark Esper in London. The papers noted that the visit was taking place “two weeks before elections.” Yedioth put the news item in its “Elections 2019’ headed pages. Maariv also reported that the Russian Foreign Ministry was angry and rejected “an electoral gain attempt” by Netanyahu, who wanted another three-way summit with Russian President Vladimir Putin, US President Donald Trump and himself in the next two weeks - “that is, before the elections,” wrote Maariv’s new diplomatic affairs correspondent, Ana Barsky. The Russians didn’t buy into it believing it was for political purposes and refused the request. Later MaarivOnline wrote that Netanyahu has confirmed that there may be a meeting between himself and the Russian president. The pro-Netanyahu ‘Israel Hayom’ newspaper wrote that Netanyahu is planning to meet with Russian President Vladmir Putin ‘very soon.’ Maariv also wrote that Moscow sees Netanyahu's deviation from the policy of ambiguity in regards to attacks on other countries as violating understandings on the matter.

Netanyahu said his visit was to discuss Iran in the wake of discussions for a meeting between Trump and Iranian President Hassan Rouhani, which Netanyahu opposes. Netanyahu is pressing for more sanctions against Iran. Iran yesterday announced that it would develop more centrifuges and that it would return to the nuclear agreement only if it received a $15 billion oil sales guarantee. France has proposed offering Iran $15 billion in credit lines until year-end if Tehran comes fully back into compliance with its 2015 nuclear deal, a move that hinges on Washington not blocking it. (Maariv)

Features:
The Man Who Would Be King: Delusions of (Royal) Grandeur in Mandatory Palestine
Samuel Solnik, a Polish-born dentist living in Jerusalem in the 1940s, claimed descent from King David and tried to convince his fellow Jews and the world powers that his family should sit on the ancient throne of Israel. (Shai Ben-Ari, National Library of Israel, Haaretz)
Why Arabs Have a Hard Time Getting Car Insurance in Israel
Blame is placed variously on companies’ racism, the disproportionate number of accidents involving Arab drivers and poor infrastructure in Arab towns. (Assa Sasson, Haaretz+)
It's High Time for Israel to Reduce the Period of Compulsory Army Service
While of value to the army and society, the 'people's army' ethos may be too expensive to hang onto due to economic realities. Part 3 of a series. (Meirav Arlosoroff, Haaretz+)
They wrote a negative review on the Facebook page of a renovations contractor because they didn’t agree with his political opinion - and will compensate him with 96,000 shekels
Is it permissible to hurt a person's business on Facebook just because his opinion is different from yours? At least according to a recent case the answer is no. A renovation contractor who expressed his opinion on his personal Facebook page that he could not condemn a [Palestinian] attack in Kiryat Arba in 2016 against a 13-year-old girl, who was murdered in her bed, will be compensated for tens of thousands of shekels by several people who went to his business page, impersonated his customers and gave him negative reviews about the service he allegedly rendered or a one-star rating for his professionalism. One of the defendants criticized on the business page that the plaintiff was a "very unskilled contractor,” another wrote "I heard his work was terrible and unprofessional.” The Tel Aviv Magistrate's Court ruled earlier this week that the three plaintiffs would pay the plaintiff a total of 46,000 shekels. Two other defendants had earlier decided to settle with the plaintiff, represented by Attorney Guy Ophir and Roy Ben-David, and paid a total of 50,000 shekels. This was after they admitted that they weren’t clients of the renovation contractor and what they wrote was motivated by their anger over the political statements of the plaintiff. The plaintiff also sued Facebook, which claimed that the lawsuit should be dismissed against it, and this process continues to be conducted. Lawyer Ophir: “Even if the (plaintiff) crossed the line in what he wrote, there is no justification for hurting his business, certainly not as a way of impersonating themselves as his customers and giving him negative criticism.”  (Yedioth Hebrew)

Elections 2019 Commentary/Analysis:
As Bibi Meets Boris — Tory Rebels Prove Morally Superior to Likudniks (Anshel Pfeffer, Haaretz+) Netanyahu visits London today. While he can still get his parliamentarians to dissolve themselves and call an unnecessary election, the backbenchers in Westminster proved they still have backbone.
Voting against Israeli electoral apathy (Ruthie Blum, Israel Hayom) We Israelis are used to having our tax shekels spent on futile, top-down endeavors born of nanny-state committee meetings held to interpret and tackle societal phenomena.
Israel's Watchdog Proves Himself a Spineless Servant of Netanyahu (Gidi Weitz, Haaretz+)  By allowing our wealthy prime minister to take a loan from his multimillionaire friend, Spencer Partrich, Englman has yet again shown he is a rotten and weak gatekeeper.
Idea theft: The governing coalition is far from a true ideological right-wing (Ron Tira, Maariv) If the upcoming elections deal with right and left questions, then the coalition is not on the right. The elections will essentially decide between individual liberty and between religious and governmental coercion.

Netanyahu’s Ongoing Terror Attack (Zehava Galon, Haaretz+) About a week ago the prime minister accused the broadcasting corporation Keshet of perpetrating “an attack on democracy” and called on people to boycott it. An interesting choice of words from the man whose entire political career has been nothing but an ongoing attack on democracy…They’re all illegitimate in his eyes: the president, the court, the prosecution, the media, the academic world, society, the leftists (the definition includes the whole political spectrum – from the Joint List to Avigdor Lieberman), the Arab citizens and more. For decades now he has had strategic partners in the attack on democracy. “Yamim Noraim” (“Terrible Days”), the unsettling film by Yaron Zilberman and co-written by Ron Leshem about the assassination of Yitzhak Rabin, shows how Netanyahu associated himself with the rabbinic establishment and how together, they fostered and raised furrows of wild weeds in which the assassin, Yigal Amir, grew. Courageously, the film brings back the responsibility of Netanyahu and the rabbinic establishment for the murder into focus, which over the years has been blurred by intentional collective whitewashing.
Prepared for APN by Orly Halpern, independent freelance journalist based in Jerusalem.
comments powered by Disqus